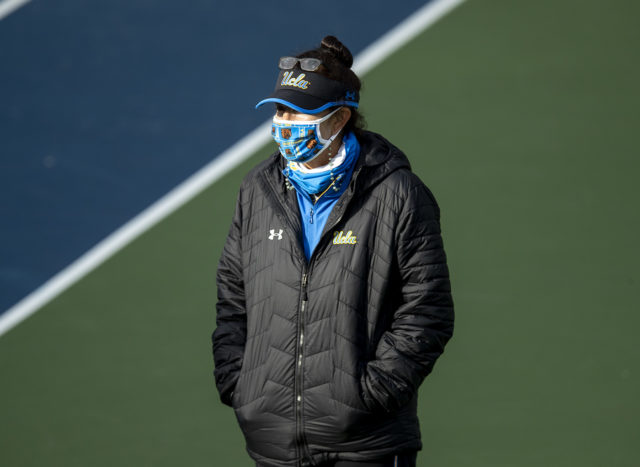 Coach Stella Sampras Webster will lead No. 3 UCLA women's tennis into its first matchup against San Diego in over four years. The Bruins are currently 4-1 on the season. (Andy Bao/Daily Bruin)

The Bruins’ first regular match of the season has been four years in the waiting.

No. 3 UCLA women’s tennis (4-1) will travel south to take on San Diego on Saturday, a team they haven’t played since February 2017. This match will be UCLA’s first regular match of the season following ITA Kickoff Weekend and the ITA National Women’s Team Indoor Championship.

Coach Stella Sampras Webster said the team will prepare like they do for any match, but there will be some things they’ll be adjusting to.

“We’re going to play at San Diego so it’s going to be a new environment,” Sampras Webster said. “These players are very used to playing at different venues so I think they’ll handle everything pretty well, but it will be a little adjustment of having to drive down the day of, and play the day of and come back the day of.”

As well as playing a team they have little experience playing, some players with little match-play experience this season may get the opportunity to play singles matches against the Toreros.

Johnson has played exclusively doubles matches this year, whereas Ong has played just one singles match and Vagramov has yet to play at all.

Despite the unfamiliarity of the Bruins’ opponent, Sampras Webster said she sees the match as a great opportunity for competition.

“I think the biggest thing right now is we need matches, we need competition,” Sampras Webster said. “I expect them to go in and compete and use this match, like every match, to get better. … It’s a great opportunity to see our team compete and just get more information on where everyone’s at individually and (on) us as a team.”

The Bruins’ regular-season finale comes against a familiar foe.

No. 19 UCLA swim and dive (1-1) is set to travel across town to Uytengsu Aquatics Center to face rival USC (0-1) in a two-day dual meet and the team’s final meet before the Pac-12 championship. Both teams’ losses came at the hands of No. 1 California (2-0).

The Bruins met the Trojans earlier in the season in an unscored tri-meet with Arizona. With race times recorded, second-year coach Jordan Wolfrum said UCLA would have won had the meet been traditionally scored.

“Even though we didn’t formally score the meet, I scored the meet,” Wolfrum said. “And I know that in that format on that day, had we scored the meet, we would have won. We won by about 15 or 20 points, I think, by my estimation. So we feel really confident.”

Wolfrum said both teams swim faster simply because of the rivalry.

“Year over year for a long time, the fastest wins of the regular season for both USC and UCLA are always our best meets – it’s a great meet,” Wolfrum said. “It’s really close to the end of the season. It’s a great warmup for our championship meet as well, but it gives us a really good opportunity to race. Some of our athletes are more motivated in this rivalry than at some really high levels. It’s a good deep spiteful rivalry and we love it.”

The Bruins moved up two spots in the rankings, splitting two matches with the No. 1 team in the country last weekend, and now head back to Southern California to face a familiar foe.

No. 6 UCLA men’s volleyball (2-1) will return home to play rival USC in the Trojans’ first game of their season Saturday at 5 p.m. before playing them twice more in the following week.

In last year’s match against USC, the Bruins saw a 3-1 victory when they outhit the Trojans .391 to .212. This year, after returning home from Provo, Utah, redshirt junior libero/outside hitter Cole Pender said UCLA will set its sights on training with the newly acquired experience it has gleaned from its matches against BYU.

“There are really good takeaways … to focus on in practice and our game next week against USC on Saturday,” Pender said. “(We) made a lot of good plays that we can build on throughout this year.”

Pender added the same energy the Bruins had for last weekend’s competition would carry over into the team’s upcoming match against USC.

“We treat every single game like it’s the same,” Pender said. “Playing USC at home is definitely a buildup, though. We’re going to be really excited, come out with a lot of energy, have a great week of practice, (and) just build off what we did (at) BYU.”

Despite having the home-court advantage, history is not on the Bruins’ side.

No. 18 UCLA women’s volleyball (4-2) will look to end an eight-year home losing streak against No. 10 Washington (5-1) in its weekend doubleheader at Pauley Pavilion.

Since Michael Sealy took over as head coach before the 2010 season, the Bruins’ last win at home against the Huskies was Oct. 28, 2012 in four sets. However, the last time UCLA beat Washington at Pauley Pavilion was over a decade ago on Oct. 29, 2010, when they recorded a 3-2 win.

Team captain and senior opposite/outside hitter Mac May echoed that sentiment about Washington, a team that managed to limit May – the 2019 Pac-12 Conference Player of the Year – to a season-low attack percentage in a match last season.

Unlike last season, the Bruins will have some breathing room as the Huskies will be without middle blocker Avie Niece, who led the team in blocks last season. Even without Niece at the helm, Washington has still managed to maintain its identity at the net this season, ranking fifth in the Pac-12 in blocks. However, that may serve as a double-edged sword.

“Washington is a huge blocking team – very physical,” said May. “We’re going to have to use that to our advantage.”