Men’s basketball defeats Washington, with Johnny Juzang scoring half of its points 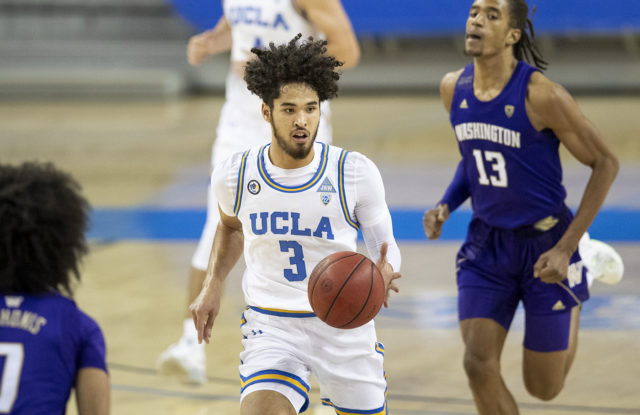 Sophomore guard Johnny Juzang scored a career-high 32 points to account for half of UCLA men’s basketball’s total in its win over Washington. (Andy Bao/Daily Bruin)

In a game of trading punches, the Bruins outlasted the Huskies.

The Bruins began by scoring the game’s first 11 points, forcing the Huskies to take an early timeout. Coming out of the break, Washington quickly tied the game with an 11-0 run of its own, with six points from forward Nate Roberts and five from guard Quade Green.

The Bruins’ 9:15 scoring drought was broken by six quick points by Juzang, en route to 21 first-half points. The Kentucky transfer shot 8-of-13 from the field and 3-of-7 from beyond the arc in the opening 20 minutes, and said he got into a rhythm in the first half and felt he was in the zone.

Juzang finished the night shooting 12-of-23 from the floor and trailed only sophomore guard/forward Jaime Jaquez Jr. in rebounds with seven.

When these two teams last met Jan. 16, the Bruins scored 81 points – their second-highest scoring output in the Pac-12 this season – and the Huskies scored 76 – tied for the most points scored by an opponent in any of UCLA’s wins this season.

The first half Saturday did not display the same offensive forces from the previous meeting, as there were just 46 first-half points. The Bruins’ 26 points were their second-fewest in an opening frame this season, and the Huskies’ 20 were the fewest allowed by UCLA in a first half.

Green and guard Marcus Tsohonis led the Huskies’ second-half charge right out of the gate, scoring a combined 31 points on 10-of-20 shooting in the final frame, after only five in the first half. The duo went on an 8-0 run by themselves to tie the game at 34 apiece and was responsible for 75.6% of Washington’s second 20-minute scoring.

Despite Green’s and Tsohonis’ big second halves, coach Mick Cronin said he was pleased with his team’s defensive efforts.

“We’re holding teams in our wins to around 60, 61 (points) a game,” Cronin said. “That’s what you’ve got to do to win college basketball games, especially in conference. You’ve got to play defense. So really proud of our effort, just proud of the way our guys competed. The way we practiced yesterday, I thought this was going to happen, but sometimes the basketball gods aren’t on your side.”

The Bruins went on another run of their own following Green’s and Tsohonis’ as they scored 10 consecutive points for the second time in the game. Junior guard David Singleton hit two 3-pointers – his only scoring contributions of the night – and Juzang and redshirt junior forward Cody Riley added jumpers of their own.

With Juzang supplying most of the Bruins’ offense, Jules Bernard was the only other visitor to score more than six points. The junior guard ended the night with 14 points on 5-of-9 shooting, with six rebounds.

In the absence of redshirt junior forward Jalen Hill, UCLA continued to struggle getting production from its big men. Riley failed to reach double digits in points of rebounds for the second game in a row and freshman forward Mac Etienne scored two points and grabbed two rebounds in his third game with the squad.

Jaquez pulled in a game-high 10 rebounds, the second time this season he has reached double digits, despite failing to eclipse the double-digit point mark for the fourth consecutive game. He said the win was important for the Bruins given losses in three of their previous four games.

“I’m feeling really good about tonight, especially when you get to this part of the season – it gets really tough,” Jaquez said. “Teams know what they need to do to win games. It makes it tough, coming out and trying to win on the road, especially. This is our second time playing teams and things like that. So it’s just a tougher time at this (part of the) year, and to come out with a win tonight was really big for us.”

The Bruins left 12 points on the floor for their worst free-throw shooting percentage in more than two years as they shot 6-of-18 from the free-throw line.

Cronin said that in February, all that matters is winning, even when the team is not at full strength or performing near its fullest potential.

“At this point in the year, you’re just trying to win,” Cronin said. “I think this was a really important win for us with (Hill) out, (Riley’s) not himself and (Washington) got hot – we had every reason to fold up. I’ve never seen a team win a game (while going) 6-of-18 from the foul line, a conference game on the road.”

UCLA will be back in action against the Arizona schools in Pauley Pavilion with a chance to take all four games from Arizona and Arizona State for the first time since the 2007-2008 season.