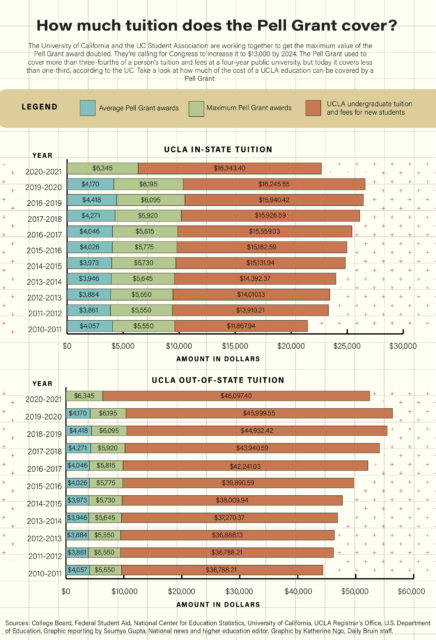 The University of California Student Association is working with the UC to urge the U.S. Congress to double the maximum value of the Pell Grant.

The UC launched the Double the Pell campaign and announced its partnership with UCSA on Feb. 8. The campaign’s main goal is to double the Pell Grant amount allocated to low-income students from $6,345 to $13,000 by 2024, according to a UC press release.

The Federal Pell Grant is awarded to low-income undergraduate students who are U.S. citizens or eligible noncitizens. Students are automatically considered for a Pell Grant if they file the Free Application for Federal Student Aid, according to the UCLA Financial Aid and Scholarships website.

A Pell Grant expansion is necessary during the economic downturn brought on by the pandemic, said UC Office of the President spokesperson Ryan King in an emailed statement.

“The COVID-19 pandemic, which has impacted the financial security of students and upended our nation’s economy, has called attention to the need for reinvesting in Pell,” King said.

Doubling the Pell is also a priority of President Joe Biden’s administration. Biden’s platform when he was running for president in 2020 said that doubling the maximum value of the Pell Grant will help close the gap between high and low-income students so everyone can pursue an education beyond high school.

Aidan Arasasingham, the UCSA president and a fourth-year global studies student at UCLA, said he spoke to Biden-Harris transition leaders for education on doubling the Pell Grant through Congress at the start of 2021.

“We received very strong receptive feedback from the administration and the commitment that this would be a priority,” Arasasingham said.

The UC and UCSA are also working with students, faculty, staff and alumni using a petition calling on Congress to double the Pell Grant, King said.

The petition has received more than 2,800 signatures as of this article’s publication.

UCSA and UCOP are also organizing virtual events, including planned congressional advocacy days and briefings for members of the California congressional delegation during the week of Feb. 22, King said.

If the Pell Grant is doubled, its current recipients would not need to receive as much institutional aid to meet their needs, allowing the UC to redistribute money to other parts of the student body or increase the programmatic resources available to all UC students, Lewis said.

Shawn Brick, the UC’s director of student financial support and consultant to UCSA on the campaign, said he hopes there can be a bipartisan solution to the Pell Grant.

“I’m hopeful that the folks on both sides of the aisle can appreciate the importance of college affordability,” Brick said.