By Christine Tran and Constanza Montemayor 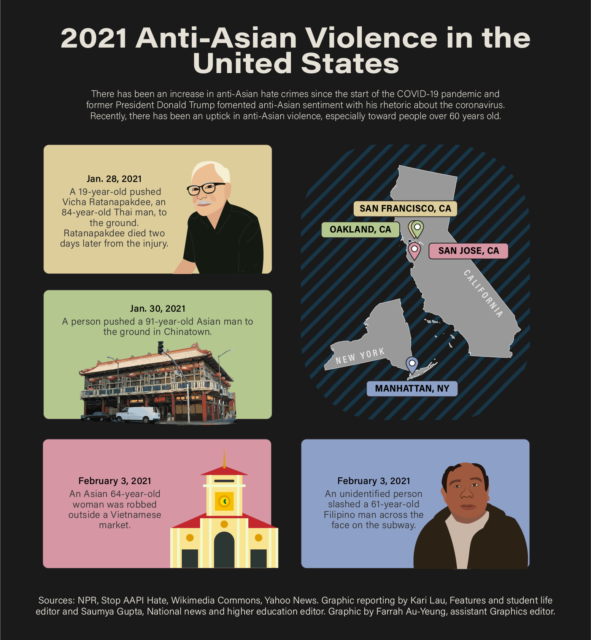 A string of attacks on Asian American elders has sparked a conversation among the UCLA Asian community about the rise of anti-Asian violence.

For many Asian students, the recent violence has made them concerned about the safety of their loved ones.

Marian Huang, a fourth-year communication student, is worried for her grandparents who live by themselves in Chicago’s Chinatown. Huang said it is alarming to think her family could be the target of hate crimes.

“They live on their own and a lot of the time they need to go out and get groceries,” Huang said. “Knowing that there is an increase in crime rates and knowing that they often will walk alone is actually really scary to me.”

Hearing news of the recent violence caused Angela Li, the director of the UCLA Asian Pacific Coalition, to feel helpless and worried for her family – despite the fact they live in Queens, a neighborhood in New York with a sizable Asian population, the fourth-year Asian American studies and political science student said.

“As someone who is also native to New York, hearing about these instances on both coasts was definitely very striking,” Li said. “I think it was always there. It’s just a matter of realizing how prominent it is now.”

There needs to be more action to address violence against Asians, such as thorough protective legislation and aid for victims, she added.

Li is taking action through her position as director of APC. She and the coalition are hosting a fundraiser to assist the Chinatown Community for Equitable Development to strengthen their support network. They are also reaching out to assist organizations in Oakland’s Chinatown, the site of a recent attack on a 91-year-old man.

Action against instances of anti-Asian violence is necessary to avoid settling into complacency, Li said.

Security footage of the recent crimes has circulated on social media and several Asian American celebrities like Daniel Dae Kim and Awkwafina called for change. Artist Steffi Lynn created an infographic, that is trending with the #StopAsianHate, which includes information on the attacks and how people can support the AAPI community.

It is frustrating still because there are many people responding in ways that are not supporting the AAPI community, Huang said.

Huang added she believes the lack of support stems from the model minority stereotype placed upon Asians and how it leads people to believe Asians are not targets of racism or discrimination.

The model minority myth is a stereotype often applied to Asian Americans, praising them as a minority of particular academic, cultural and economic success in contrast to the judged lack of success of other minority groups, according to a publication from the Harvard Law School Center on the Legal Profession. This false belief in their inherent success often denies their experiences of discrimination, stated the article.

Anti-Asian sentiment has been on the rise since the beginning of the pandemic.

Misaki Mizutani, a first-year psychology student, said she felt more conscious of the increasing hate when strangers called her and her friends racial slurs.

“I went to Palos Verdes with my friends, and during routine photos, there were cars that kept driving past us, and they kept yelling … all these racial slurs,” she said. “I feel like I became more aware that (COVID-19’s) impact on the Asian American community is such a bigger deal than I really thought initially.”

Mizutani also felt disheartened after watching her hometown be burdened by the threat of violence and the stress of the pandemic.

“It’s really heartbreaking to see something that’s so close to home,” Mizutani said. “To see the Asian community going through (the COVID-19 pandemic) and financial burdens and stress … have to experience this racism, I feel like a lot of people can at least be more sympathetic because this isn’t a thing that you (can) possibly understand.”

Chancellor Gene Block said in a campus-wide email that it is critical to recognize hateful incidents and condemn them. Students must not give into stereotyping or racial biases, he added.

Block’s statement was necessary, but it is not enough, Li said. UCLA must look for more concrete action to counteract anti-Asian violence, Li said. The APC, for example, plans to do so by fundraising to support Asian communities struggling in the pandemic, she added.

Natalie Masuoka, a political science and Asian American studies associate professor, said that while there was generally a rise in anti-Asian bias over the course of 2020, it is still difficult to document and track the existence of patterns of hate crimes.

“We don’t necessarily have a straightforward way of recording a hate crime occurring,” Masuoka said. “What we do know is that a lot of people, women and people of color, when they are marginalized they feel more embarrassed than anything and they don’t necessarily want to report.”

Masuoka said Asian Americans are the least likely to say they have experienced racial discrimination because they do not think their experience constitutes discrimination.

She added that being mistreated does not have to be something as aggressive as being attacked and there are various ways racial bias works into how people interact.