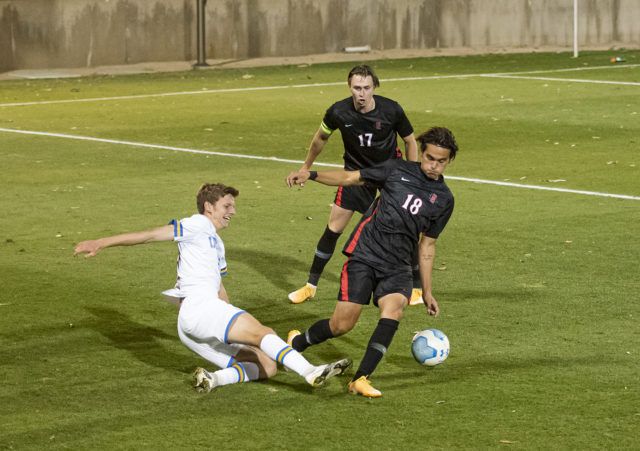 Sophomore forward Ollie de Visser found the back of the net for the first time as a Bruin as UCLA men's soccer tied San Diego State on Saturday night. (Antonio Martinez/Daily Bruin)

The Bruins’ first Pac-12 game of the season came down to the wire.

“For a lot of these guys, it was their first Pac-12 game,” said sophomore midfielder Riley Ferch. “These are how Pac-12 games go. They’re very tough. They’re very physical. You got to win the 50/50 balls. I feel like we did a lot better in the second half – that’s why we controlled the game a lot more.”

UCLA faced offensive challenges early on against SDSU, as the Bruins attempted only one shot to the Aztecs’ six in the opening 25 minutes. Coach Ryan Jorden said the disparities in shot attempts can be attributed to the team’s offensive mistakes.

“We actually generated most of their attacking play by playing into the areas they wanted us to play into,” Jorden said. “So we got to be better at that. We created their opportunities for them and we got to grow.”

For the second consecutive game, junior goalkeeper Justin Garces recorded three or more saves – preventing the Aztecs from scoring in the first half. The keeper is now averaging 3.33 saves in his three appearances this season.

The Bruins would mount an aggressive offensive approach in the second half and overtime by taking a combined seven shot attempts – one of which resulted in sophomore forward Ollie de Visser’s first career goal at the 73-minute mark.

De Visser said the team wasn’t switching the side it attacked from enough, but a change before the second half opened up the field for more chances.

“So, in the first half we definitely weren’t changing it enough,” de Visser said. “In the second half, we managed to do that a lot more, which felt like we were tiring them out. So, we definitely gave ourselves a lot better chances and kept it in (the Aztecs’) half. When I got that chance, I just had to make sure I took it.”

“I’m extremely happy for Ollie because I’ve known him for the past two years,” Ferch said. “Someone who works extremely hard in practice. So, it’s nice to see him and his work come and show on the field.”

De Visser’s goal would be matched within five minutes of action, as SDSU midfielder Blake Bowen converted on his shot attempt at the 77-minute mark.

By the end of regulation, the score was still tied 1-1.

Within the game’s final minute in overtime, SDSU forward Austin Wehner appeared to win the contest when he tipped in a potential golden goal, but it was waved off by an assistant referee because of an offside violation.

Ferch said while the Bruins left their home pitch with a draw, the team also left with experience in a physically demanding situation.

“I felt like we were very fit going into the last stretch,” Ferch said. “For us, we’ve been super strong and super fit going into that last stretch and we really believed we could go out there and get a result so that helped us a lot. I feel like this game prepares us well for what’s to come.”

UCLA will wrap up its February action with another conference matchup in Corvallis against Oregon State this coming Saturday.

Siddiqui is currently a Sports contributor on the men's soccer beat.