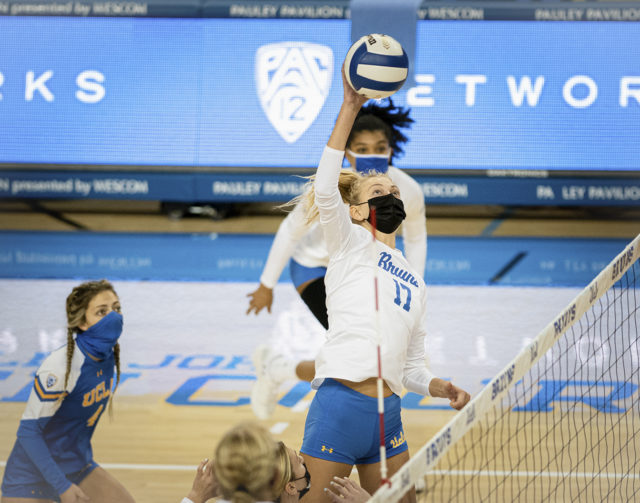 The Bruins were able to secure their first sweep since the first week of the season, despite playing in unfamiliar conditions.

While playing in Tempe, No. 15 UCLA women’s volleyball (7-3) was able to defeat Arizona State (1-9) on both Friday and Sunday. Both matches at Desert Financial Arena were open to a limited number of fans – the first time this season that the Bruins have played in front of spectators. Freshman setter Audrey Pak said playing for fans was a pleasant change for UCLA.

“We haven’t had fans in a while,” Pak said. “It was really nice to see family and friends and people that support us out there.”

In the first set of Friday’s match, the Bruins and the Sun Devils looked to be evenly matched, with 12 instances of a tied score and neither team ever gaining a substantial lead. However, UCLA was able to secure the win in the end, defeating Arizona State 25-22.

The Bruins got off to an early lead 4-0 in the second set and maintained it before the Sun Devils were able to tie the set 14-14. UCLA eventually defeated Arizona State after scoring nine of the last 10 points in the set.

In the fourth set of the match, the Bruins were able to bounce back from their performance in the previous set. They recorded 19 kills and had a hitting percentage of .457 in their 25-22 defeat of the Sun Devils, which secured them the match.

“I feel like every time a team wins the first night, the losing team has the advantage,” Sealy said. “(Arizona State) came out in set one and they were serving really, really tough. We were on our heels the whole time and did a good job just being patient.”

In the first set of the second match, Arizona State scored the first three points and got out to an early lead against UCLA. Despite taking the lead for the first time at 22-21, the Bruins were able to win the set 27-25.

The second set of the match was not quite as competitive. UCLA was able to establish an early 6-2 lead and recorded four service aces in their 25-15 victory over the home team.

In the last set, the Bruins started with an early 4-1 lead. They were able to secure a 25-21 win, despite committing six errors during the last 11 points of the set.

UCLA’s two wins this weekend were its first wins since losing junior setter Devon Chang. While the team is not quite the same without her, Smith said that the Bruins are finding other ways to win.

“We definitely missed … Chang. She’s a big part of our team culture,” Smith said. “But I think the freshmen setters did a really good job of stepping up, and they communicated really well with the hitters. They ran a great offense.”

UCLA will return home to play two matches against Arizona this weekend.