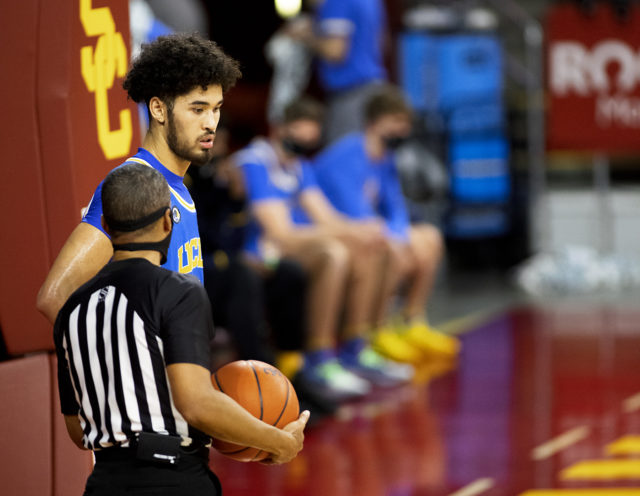 Sophomore guard Johnny Juzang had his third game of 20-plus points in February, but it was not enough to lead UCLA men’s basketball past Colorado on Saturday. The Bruins still maintained their lead in the Pac-12 regular season title race despite the loss. (David Rimer/Daily Bruin staff)

With a chance to strengthen their grasp on first place, the Bruins coughed one up down the stretch in Boulder.

UCLA men’s basketball (17-6, 13-4 Pac-12) traded blows with Colorado (19-7, 13-6) on Saturday night, with the two teams separated by one possession for most of the second half, but turnovers and missed shots by the Bruins led to a 70-61 Buffalo victory. UCLA went nearly seven minutes without hitting a field goal late in the second half and allowed 23 points off turnovers in the game.

“Candidly, I thought we tried to play too much individual basketball down the stretch,” said coach Mick Cronin. “Therefore, we had guys out of control and that’s why we had turnovers.”

The Bruins led 57-55 with 6:21 left in the game after redshirt sophomore guard Tyger Campbell drilled a straightaway 3-pointer a minute earlier. That’s when the Buffaloes went on a 15-1 run, with 13 of those points coming off seven Bruin turnovers.

The turnovers came in all shapes and sizes – travels, fastbreak fumbles and errant passes – and allowed Colorado to take the lead despite both teams shooting 46% from the field and hitting five 3-pointers.

“We kind of panicked at the end,” said freshman guard Jaylen Clark. “Landing on two feet, passing off two feet, no running passes, just catching and just running out and going in the paint with nothing to do. We’ll be able to fix that though.”

The fact that there was garbage time at all stands in contrast to the first 35 minutes of game time, in which the teams were never separated by more than eight points. The first half was mostly a battle between the two teams’ leading scorers, with Juzang dropping 14 and guard McKinley Wright IV scoring 17 for Colorado.

That back-and-forth scoring duel continued into the second, as Juzang finished the night with 25 points compared to Wright’s 26. There were nine lead changes and four ties in the second half, all of which came in the first 15 minutes of the period – before the Buffaloes left the Bruins in the dust.

Saturday marked the fourth time Juzang scored 25 or more points this season, but UCLA fell 1-3 in such games. When asked if he found it frustrating that his good individual performances hadn’t been lining up with team victories, Juzang said winning is the only thing that matters.

“For me, it’s about winning and losing,” Juzang said. “I don’t like losing at all.”

Clark was the only other Bruin to finish in double-digits, putting up a career-high 10 points on 5-of-6 shooting from the field.

The Bruins had a chance to take a 1.5-game lead on USC in the Pac-12 standings with a win, considering the Trojans lost their game earlier Saturday night. Clark said he and his teammates were aware of that result prior to tipoff, and that they’re lucky to still control their own destiny with two games left in the regular season.

“We were all excited about that, knowing (USC) lost before the game,” Clark said. “If you win out, you don’t got to worry about nothing else, just got to go beat Oregon and (USC).”

Now, the Bruins are up by just half a game and could fall as far as the No. 4 seed in the tournament should the ball not bounce their way next week.