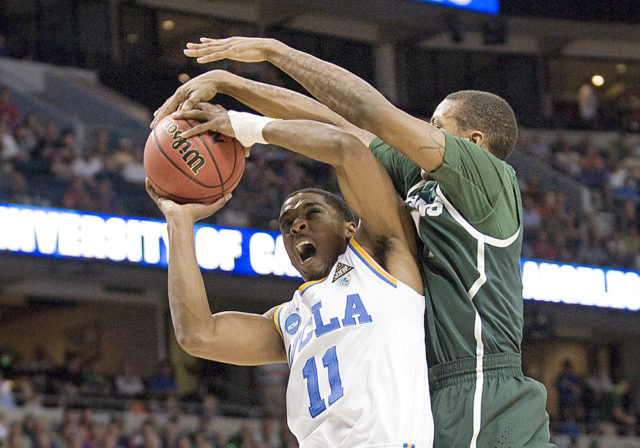 Back in 2011, UCLA men's basketball faced off against coach Tom Izzo and Michigan State in the NCAA tournament. Now in 2021, the Bruins will match up with Izzo's Spartans in March Madness once again. (Daily Bruin file photo)

The last time the Bruins played the Spartans on the opening Thursday of March Madness, they nearly blew a significant second-half lead.

Blowing significant second-half leads has become a habit of sorts for No. 11 seed UCLA men’s basketball (17-9, 13-6 Pac-12) this season, as it has done so in each of its last four games. But 10 years ago, the Bruins proved they could hold on in tight games on the biggest stage.

Then-No. 7 seed UCLA entered the 2011 NCAA tournament .500 in its previous six games, culminating in a loss to Oregon in its first game at the Pac-10 tournament following a first-round bye. Four consecutive early-season losses to Villanova, Virginia Commonwealth, Kansas and Montana made it difficult for UCLA to build a top-tier resume, but it still snuck into the bracket on the top half of the seed list.

That iteration of the Bruins was 20-0 in the regular season when it held a double-digit lead at any point in a game, a situation they once again found themselves in against the then-No. 10 seed Spartans on March 17, 2011.

Then-sophomore forward Tyler Honeycutt started things off with a 3-pointer on the opening possession of the game, and UCLA led for the remainder of the first half. After carrying a 42-24 advantage into halftime, however, the Spartans cut the Bruins’ lead down to 10 with 13:16 left in the second period.

UCLA seemed to put Michigan State’s comeback effort to bed when it stretched that lead back to 23 points less than five minutes later. That’s when Michigan State put together an 18-3 run in a four-minute span before stringing together an even more crucial 10-2 run inside the final two minutes to make it a 77-76 game.

Then-junior guard Malcolm Lee hit his first free throw with four seconds left to extend UCLA’s lead to two, but his second try clanked off the back rim and gave Michigan State a chance to seal the comeback victory. The Spartans pulled down the rebound and tried to advance the ball for a final shot before the buzzer, only for Spartans guard Kalin Lucas to get called for a travel to end the game.

Coach Tom Izzo guided Michigan State to back-to-back Final Fours the two prior seasons, and he said after the game UCLA came out stronger and gave itself enough of a cushion to stave off his team’s comeback.

“I give UCLA a lot of credit,” Izzo said. “They just seemed to have more energy than us early.”

The Bruins were 12-of-22 from the free throw line with seven turnovers in the final eight minutes, however. Even though they moved on to the Round of 32, the crew in the CBS studio was quick to criticize them after the game.

“UCLA could write a textbook on how to blow a late lead in the NCAA tournament,” said studio analyst Seth Davis. “They did everything they could possibly do to lose this game, except finish with fewer points.”

Ten years later, UCLA has been unable to overcome the same type of late-game mishaps that nearly sank its season in March of 2011.

Missed last-minute free throws cost UCLA its season finale against USC on March 6 as well as its Pac-12 quarterfinal matchup with Oregon State on March 11, while turnovers led to blown leads against Colorado and Oregon on Feb. 27 and March 3, respectively.

If the Bruins are able to build a double-digit lead on the Spartans come Thursday night, recent history shows they might not be favored to hold on to it like those who came before them.