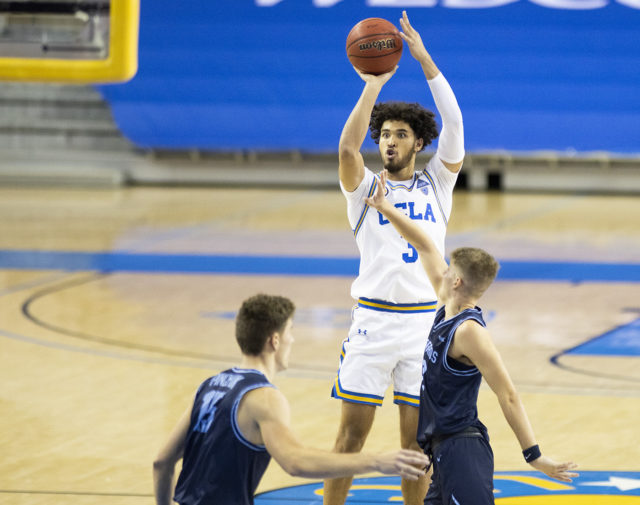 Before exiting with a right ankle injury, sophomore guard Johnny Juzang scored 23 points – 17 of which came in the second half and overtime – as No. 11 seed UCLA men’s basketball completed a 14-point come-from-behind victory over fellow No. 11 seed Michigan State. (David Rimer/Daily Bruin staff)

The Bruins spent the past month coughing up double-digit leads in the second half, heading into March Madness on a four-game losing streak.

On Thursday night, the shoe was on the other foot.

Jaquez was at the line with a chance to put UCLA down by one inside the final minute, but he missed the front end of the 1-and-1, sparking flashbacks to missed free throws at the end of its losses to USC and Oregon State.

This time, however, Jaquez got his own rebound and kicked out to reset the offense, only for redshirt sophomore guard Tyger Campbell to find him cutting for an and-1 that tied things up with 28 seconds left on the clock.

“I wasn’t thinking about losing this game,” Jaquez said. “I didn’t think there was any chance that we couldn’t come back and win. So winning was on my mind the entire time.”

On the other end, junior guard Jules Bernard’s shot contest forced an air ball from Michigan State’s leading scorer, forward Aaron Henry, and it was all Bruins from there on out.

Juzang opened the extra period with four points, giving UCLA a lead it wouldn’t relinquish for the rest of the night. The former Kentucky transfer went down with a right ankle injury in the final minute, but his teammates did enough to hold on for the victory.

UCLA will now have a spot in the main bracket for the first time since 2017, the same year it recorded its last tournament win – a victory over coach Mick Cronin’s old squad, Cincinnati.

“I think I speak for all coaches that it’s just so nice to be able to have the kids get a chance to do this,” Cronin said. “But when you’re building a program, it’s obviously a big win for us and step forward in the right direction, but we got more work to do, guys.”

Before they staged the comeback, however, the Bruins were hanging on by a thread.

An even 15-15 start to the game gave them plenty of time to take control of the game, but it was the Spartans who took over from there. Using five 3-pointers, Michigan State went on a 25-11 run to go up by 14 heading into the final minutes of the opening half.

The Spartans shot 5-of-9 from deep in the first half, despite averaging only four made 3-pointers per game across their last seven contests.

“I was concerned with our effort in the first half,” Cronin said. “I really don’t talk about winning or losing a lot with these guys, I try to talk to them about their effort.”

A step-back jumper at the buzzer by Jaquez cut the deficit to 11 points heading into the break, and it was a sign of things to come on the other end of halftime.

UCLA opened things up with a 12-4 run thanks to buckets by Jaquez and Juzang. From there, the Bruins continued to chip away at the lead, eventually taking a one-point lead on a layup with 5:48 remaining by Bernard.

Most of the comeback occurred with Cronin rolling out a small-ball lineup, considering redshirt junior forward Cody Riley picked up his fourth foul not even halfway through the second half. As a result, freshman guard Jaylen Clark got minutes in crunch time, which he used to pull down 50-50 rebounds and stay active on defense on the biggest stage possible.

“There’s no way we win without Jaylen Clark,” Cronin said. “The toughness and intensity of Jaylen Clark, that’s why I signed him. You know, I should have listened to his AAU coach when I got the job. He told me ‘Jaylen Clark needs to play for you, you guys were made for each other.’”

The two teams went back and forth down the stretch, but it was the Spartans who held a five-point lead with 1:29 remaining. Juzang hit two free throws to make it a three-point game, then Jaquez erased the difference with his and-1 under the basket.

Juzang picked up 23 points in the game, while Jaquez finished with a career-high 27 in his NCAA tournament debut. With roughly 1,500 fans in the stands and a statue of Hall of Fame coach John Wooden just outside the front doors, Jaquez said the atmosphere felt grander than he’s ever played in before.

“As a kid, everyone dreams about playing in this tournament,” Jaquez said. “I know it might be corny, but you could feel the madness when you’re in the gym. … The energy was there. It was alive. We’re playing in John Wooden’s home court, so that definitely meant something to us – we wanted to come in here and get the win for him.”

Cronin said he planned on Jaquez being a major part of the offense Thursday, aiming to expose mismatches he had with Spartan forwards Malik Hall and Joey Hauser.

“Going in, (Jaquez) knew I was coming his way with a lot of stuff,” Cronin said. “So none of it surprised me. (Jaquez) is almost better when we’re down, he’s just got tremendous heart.”

UCLA was 2-2 in overtime on the season prior to Thursday, with its most recent game being an overtime loss to Oregon State at the Pac-12 tournament one week earlier.

The Bruins made sure to make the most of the extra five minutes this time around, and they’ll keep dancing another day.