Men’s basketball to face off against No. 6 seed BYU in March Madness Round of 64 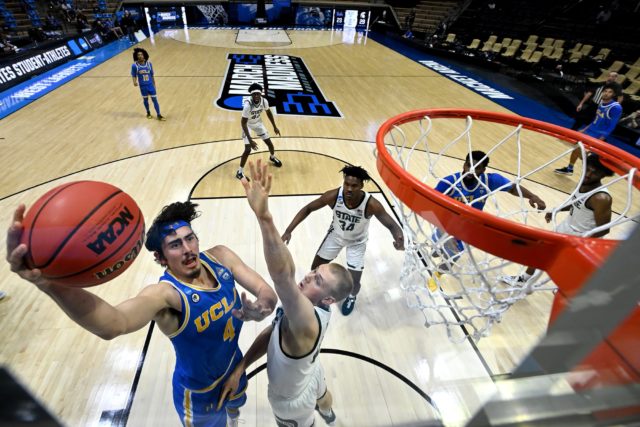 Sophomore guard/forward Jaime Jaquez Jr. led the Bruins to their first NCAA tournament win since 2017 on Thursday. Following the victory, No. 11 seed UCLA men's basketball will face No. 6 seed BYU in the Round of 64 on Saturday. (Courtesy of Andy Hancock/NCAA via Getty Images)

The sophomore guard/forward never went to the bench in his team’s overtime victory in the First Four, and now he’ll have to get back on the floor less than 48 hours later with his season on the line yet again.

“He’s 19, I’m 49, he’ll be fine,” said coach Mick Cronin. “We’ve got to check some old ‘Animal House’ videos, some ways maybe to try to somehow turn something into a cold tub so we can get (Jaquez) an ice bath. Maybe we get a big garbage can that he can sit and take it up there or something.”

No. 11 seed UCLA men’s basketball (18-9, 13-6 Pac-12) is set to face No. 6 seed BYU (20-6, 10-3 West Coast Conference) in the Round of 64 on Saturday, fresh off a tight win over No. 11 seed Michigan State on Thursday night. A First Four winner has won at least one game in the main bracket in eight of the last nine NCAA tournaments, meaning history could be on the Bruins’ side against the Cougars.

The UCLA-Michigan State game wasn’t the only play-in that went down to the wire either, with all four Thursday contests coming down to the final minutes. Jaquez, who scored a career-high 27 points against the Spartans, said the extra round was just another opportunity for the Bruins to fight for their postseason lives.

The battle that is March Madness will continue into the weekend against BYU, giving UCLA a similar path to the Round of 32 that it saw at the 2019 Maui Jim Maui Invitational.

There, the Bruins played the Cougars and Spartans, losing to both by double digits.

Jaquez first entered the starting lineup on that trip to Hawaii, averaging eight points and 6.7 rebounds per game on 64.7% shooting on the weekend. He said the results last time the two teams played each other don’t mean much anymore, considering how much UCLA has grown since early last season.

The Cougars’ roster is certainly different from last year, with two of its three leading scorers joining the team last offseason. Guard Alex Barcello is in his second year since transferring from Arizona, while guard Brandon Averette and forward/center Matt Haarms are in their first years with BYU out of Utah Valley and Purdue, respectively.

The trio of transfers are averaging a combined 38.7 points per game on the season, and Cronin said their collective experience helps them mesh better as a unit.

Tipoff between the veteran Cougars and battling Bruins is scheduled for 6:40 p.m. on Saturday. The winner will play the winner of No. 3 seed Texas-No. 14 seed Abilene Christian in the Round of 32.