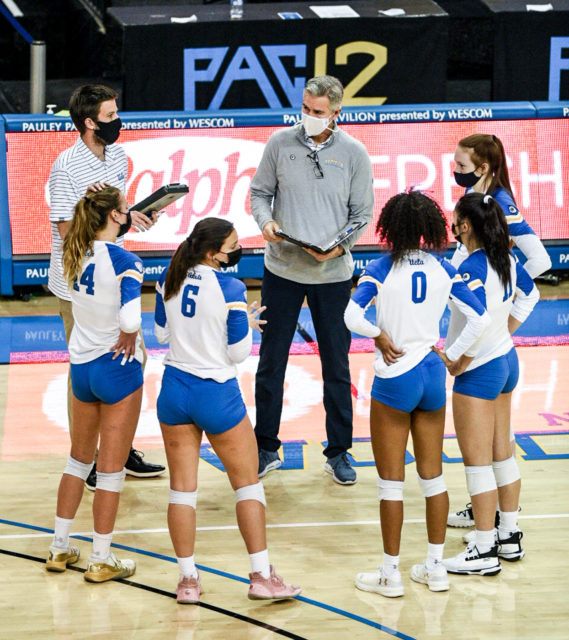 Coach Michael Sealy and No. 15 UCLA women's volleyball will face off twice against USC with a chance to secure a winning record on the campaign. (Ella Barnes/Daily Bruin)

The Bruins will have yet another chance to secure a winning season.

No. 15 UCLA women’s volleyball (11-5) will face unranked rival USC (3-7) for a home-and-home doubleheader Friday and Sunday. A single win this weekend will guarantee the Bruins end their season with a winning record.

After splitting its doubleheader against then-No. 9 Utah last weekend, UCLA obtained its eleventh win against Pac-12 competition this year. In previous seasons, that win would have ensured a winning conference record on the year. However, with a 22-game conference-only slate in 2021, the Bruins will need an additional victory.

“We don’t talk a ton on wins and losses,” Sealy said. “We just need to keep worrying about getting better at volleyball.”

While the Bruins have won eleven games this year, the Trojans are gearing up for just their eleventh game of the season. USC has seen six of its games canceled because of COVID-19 protocols, with four of those games coming in the past three weeks.

The Trojans have consequently struggled to find their footing this season, entering their rivalry games on a two-game skid.

Sealy said his team knows games in the Pac-12 will still be competitive, despite what the records might say.

“These guys have been in the Pac-12 long enough to know that every team in the conference is really good,” Sealy said. “The team knows that every team we play against is great. And especially in a (COVID-19) year, rankings don’t matter.”

For possibly the last time, the Bruins will travel to face the Cardinal.

No. 6 UCLA men’s volleyball (9-4) is playing back-to-back matches against Stanford (0-7) on March 23 and 24. Stanford will be cutting its men’s volleyball program following the conclusion of this season, so unless the two teams match up in the Mountain Pacific Sports Federation tournament, this doubleheader would mark the last matchups between the conference rivals.

“This is (Stanford’s) last year of having a men’s team, so this is kind of their farewell tour,” said redshirt freshman outside hitter/opposite Merrick McHenry. “Everyone’s super fired up, so going into Stanford we really want to focus on being super tenacious when it comes to defense and blocking.”

UCLA won both previous matches against Stanford this season, winning 3-1 twice in Pauley Pavilion. The Bruins outhit the Cardinal .393 to .128 across two matches, led by 32 kills from sophomore outside hitter/opposite Cole Ketrzynski and 27 from McHenry.

UCLA is in the midst of a 6-game road trip, its longest road trip of the season. In its last match, its four-game win streak was snapped with a 3-1 loss to No. 4 Pepperdine.

“(We’ve) got a bad taste in our mouth from this loss,” said redshirt junior middle blocker Ian Parish. “We will be right back firing on Wednesday.”

The first match will begin at 6 p.m. Tuesday, while the second match starts at 2 p.m. the following day.

In their first regular home contests of the season, the Bruins take on two teams they have never lost against.

Coach Stella Sampras Webster said being at home will be advantageous for these matches against their mountain region opponents.

“They’re pretty good indoor teams so we’re fortunate we’re at home,” Sampras Webster said. “They’re gonna be outdoors and they have to make adjustments to our facility, our courts, (our) altitude – all that stuff.”

In UCLA’s last contests against the Utes and the Buffaloes – both 4-0 home sweeps – then-No.11 doubles team junior Elysia Bolton and graduate student Jada Hart. This weekend, however, Hart will play doubles with sophomore Abbey Forbes, as Bolton is recovering from an undisclosed injury and will not play in either match.

Forbes, the No. 7 ranked singles player in the nation, currently holds a 9-1 record in singles matches and an 8-1 record from court one. In her four doubles matches with Hart this season, the pairing has won three and left the fourth unfinished in the Bruins’ loss last weekend against No. 4 Pepperdine.

Sampras Webster said this weekend will provide great competition, but also an opportunity to test the hitting depth of individual players.

“We’ve been trying to just hit more shape on the ball and just get more depth,” Sampras Webster said. “We hit the ball so hard that we don’t focus on where our shots are landing and if we can get more depth I think we’ll get more opportunities to be aggressive and play our game.”

First serve against Utah is set for Friday at 1:30 pm.