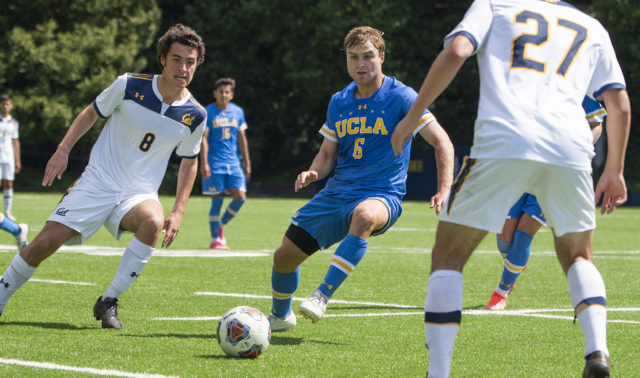 Senior midfielder Andrew Paoli took one of the Bruins' 14 shots Saturday, but none were able to find the back of the net as UCLA men's soccer was held scoreless for the third consecutive match in its loss at California. (Jeremy Chen/Daily Bruin)

The Bruins are on track to break a new record in program history – a losing record.

UCLA men’s soccer (1-5-1, 0-4-1 Pac-12) dropped all three points to California (2-3, Pac-12 record) in a 2-0 loss in Berkeley on Saturday, marking the fourth consecutive result of this sort for the Bruins. Five games into the Pac-12 schedule, the blue and gold have yet to record a win.

At this point in the 2019 season, UCLA had a 1-3-1 record. By the end of the campaign, the Bruins produced their worst record in program history at 2-6-2.

California converted all of its opportunities Saturday with its two shots on target of the game finding their way to the back of the net. The first goal for the Golden Bears came 14 minutes in when midfielder Evan Davila evaded a UCLA tackle and slotted the ball past junior goalkeeper Justin Garces into the top right corner.

Two minutes later, California’s lead doubled after a counterattack by the Golden Bears sent the ball to forward Jonathan Estrada, putting the home side 2-0 up with more than 70 minutes left to play.

The last time UCLA conceded two or more goals in quick succession was in its 4-0 loss to No. 3 Stanford on March 6, when the Bruins conceded three goals to the Cardinal within a 14-minute span.

Coach Ryan Jorden said maintaining endurance throughout the 90 minutes is a top priority.

“We don’t want to be in the position where we’re chasing games,” Jorden said. “So it’s about making sure the guys are focused and game-ready from the start.”

Despite the two-goal defeat, UCLA outperformed California in every offensive category. By the end of the afternoon, the Bruins had totaled 14 shots compared to the Golden Bears’ four and took nine corner kicks while conceding none to the home side. The visitors also had twice as many shots on goal as the hosts, putting four shots on frame to California’s two.

“We were expecting a dominant performance from us in terms of statistics and having more chances created,” Garces said. “It’s one of those things where, in the game of soccer, anything can happen and one or two mistakes can cost you.”

The Bruins have now failed to score in the last 349 minutes of play. The last time UCLA got on the board was Feb. 27 on a finish by freshman forward Grayson Doody in the 11th minute against then-No.13 Oregon State.

Following the weekend’s results, UCLA is tied with San Diego State for last place in the conference.

The Bruins will travel down to face the Aztecs on March 24 for their fourth road match in five games. As UCLA has struggled to record a single point away from home – which continued Saturday at Witter Rugby Field – senior midfielder Andrew Paoli said the team is looking at each game as a must-win situation.

“Home or away doesn’t feel any different to me,” Paoli said. “We know we have to perform so we can get the result and San Diego State is going to be a good game where we can get a win.”

Vu is currently a Sports contributor on the men's soccer beat.