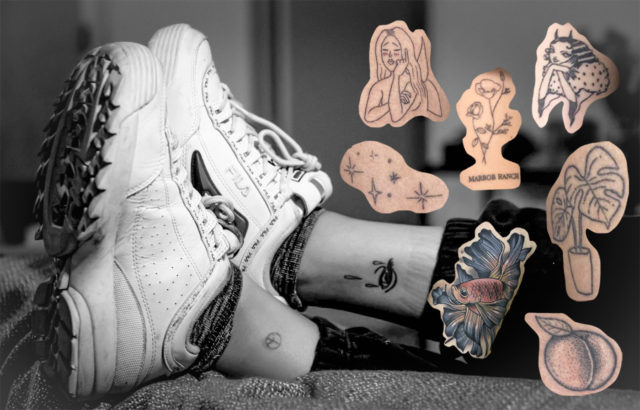 For some Bruins, getting a tattoo feels like a natural transition from leaving home for college, where they no longer seek parental guidance. (Photos courtesy of McKenna Lah & Mary Tyler. Photo illustration by Lauren Man/Assistant Photo editor & Kanishka Mehra/Photo editor.)

Turning 18 years old is a milestone that brings exciting new possibilities, but none are as set in “skin” as tattoos.

Tattoos have become increasingly common, especially among college-aged students. According to a 2015 survey conducted by The Harris Poll, 47% of millennials and 36% of Generation X have at least one tattoo, compared to 13% of baby boomers.

Westwood is no exception. Some Bruins have ventured into this world of tattoos and have even become tattoo artists themselves.

McKenna Lah, a fourth-year psychobiology student, has accumulated around 30 tattoos at 22 years old and has just recently begun to tattoo others.

Lah said when she got her first tattoo, a small cross in honor of her grandmother who had just died, her mother was upset that she got the tattoo on her own.

“Not to say that getting a tattoo isn’t a permanent and big decision, it just didn’t need to be this … momentous occasion where everything changed,” Lah said.

Lah added that she understood her mother’s sentiments and attributed them to age and generational differences.

These generational differences may stem from the historical usage of tattoos in conveying allegiance in groups such as gangs or as a way to brand prisoners, said communication professor Michael Suman.

“Even though (tattoos) are rebranding and moving towards being faddish, there’s still a little signal of rebelliousness – that rebelling against the past, your parents,” Suman said. “It’s a way of signifying your individuality.”

Silas Crocker, a first-year environmental science student who has been tattooing since 2018, said tattoos are a way to rebel against the status quo, which encourages us to fear permanence.

It’s the permanent nature of tattoos that also attracted Mary Tyler, a second-year art student, to getting inked. Unlike hairstyles or fashion statements, Tyler — who sports seven tattoos — said tattoos grow with you.

Recent alumna and self-taught tattoo artist Annie Wold said getting a tattoo is symbolic of one’s connection to oneself.

“Turning 18 is like you’re granted your bodily autonomy almost,” Wold said. “So people like to take risks.”

Crocker said getting tattoos in college is an extension of other independent experiences students face, such as living away from home and no longer having to seek permission from parents.

“(Those independent experiences) mean sometimes making big decisions about doing something on your body,” Crocker said. “I think that’s why a lot of college students are just fascinated by the idea of tattooing. It’s a way to amplify what they’ve already achieved by moving away from home.”

Though the excitement of having newfound independence seems to be a catalyst for getting tattoos at college, oftentimes it’s the first chance for someone to get one, especially for those with disapproving parents or conservative backgrounds.

Tyler said attending a conservative all-girls Catholic school was part of what led her to get tattoos.

“We weren’t even allowed to paint our nails or wear makeup or anything like that,” Tyler said.”So, I feel like (getting a tattoo) was my teenage rebelliousness. … I thought it was a cool form of self-expression.”

She also added that looking back on her experiences, she doesn’t think she would have gotten all the tattoos she had now if she paced herself.

“I do think it was the excitement of having, first of all, the money to get a tattoo –because having a job or whatever – and then also just the freedom to drive myself there and pay for it myself and have this thing that showed that I was a grown-up,” Tyler said.

Tattoos may be a rite of passage for young adults – a way to symbolically communicate their transition and allegiance to adulthood, Suman said. He said this presents a paradox for some: Tattoos express individuality while attaching one to a collective. These paradoxes, he said, are common in the social world.

Whether it is a symptom of newfound freedom or something you have been waiting to get, the reasoning behind each inky endeavor varies. Lah said when she first started, she sought justification in a meaningful backstory behind each tattoo but has since felt no such need.

“It became more about collecting art,” she said. “It didn’t have to be for any particular reason other than just I liked it and I wanted it on my body.”