UCLA men’s basketball to match up with No. 1 seed Michigan in Elite Eight 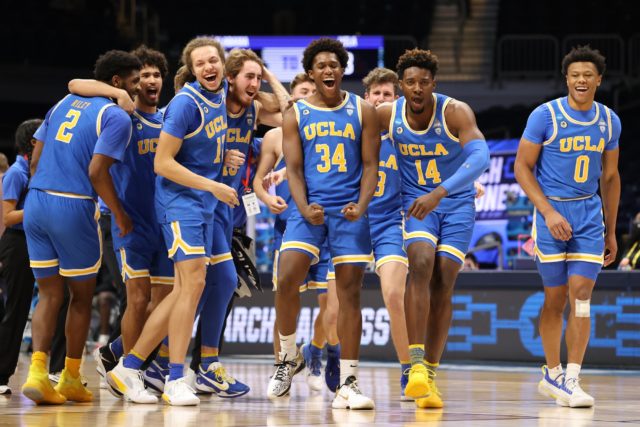 No. 11 seed UCLA men's basketball danced its way into the Elite Eight, where No. 1 seed Michigan awaits. The Bruins will attempt to make their first Final Four since 2008. (Courtesy of Trevor Brown Jr/NCAA Photos via Getty Images)

The Bruins lost their top player in December.

The Wolverines lost theirs just a few weeks ago.

Even without senior guard Chris Smith and forward Isaiah Livers, both teams are one win away from the Final Four.

“That’s why you got other guys on your roster,” said coach Mick Cronin. “All it does is create opportunity for your guys that are quality players. … I think that the longer it goes, the more those particular guys are getting quality minutes instead of shorter minutes, they get better at playing those extended minutes.”

No. 11 seed UCLA men’s basketball (21-9, 13-6 Pac-12) used a couple of those “quality” players to upset No. 2 seed Alabama in the Sweet 16 on Sunday night, setting up an Elite Eight matchup with No. 1 seed Michigan (23-4, 14-3 Big Ten) on Tuesday at Lucas Oil Stadium. Junior guard David Singleton scored 15 points and posted a plus-31 plus-minus in 20 minutes, while freshman guard Jaylen Clark pulled down nine boards off the bench against the SEC champion Crimson Tide.

Junior guard Jules Bernard is also averaging more points, rebounds, assists and minutes per game since Smith went down with a torn ACL on Dec. 31, and he said the players from deeper in the Bruins’ rotation are becoming more integral to their winning ways as the season continues.

“For us as a team, we know those guys are extremely important to our to our success,” Bernard said. “Jaylen Clark, he’s a freshman but he doesn’t play like a freshman. He’s a man on the boards, he’s physical and he does the little things that help a lot of teams win games. And David, he’s one of our leaders, our emotional leaders, and we know what he’s capable of.”

On the Michigan side, Livers suffered a season-ending foot injury in the first game of the Big Ten tournament. The senior wing was only officially ruled out for the remainder of the postseason Sunday afternoon, but the Wolverines have already played their last four games without him.

In Livers’ absence, Michigan has had its own revolving door of role players step up to replace his production. Four Wolverines scored in double figures in the Round of 64 matchup against No. 16 seed Texas Southern, and senior guard Chaundee Brown Jr. is averaging 16.5 points on .733/.625/1.000 shooting splits off the bench over the last two tournament games.

Cronin said he didn’t get much sleep Sunday night and doesn’t expect to Monday night either because of the bevy of weapons his opponent boasts – but said at least former NBA All-Star and Michigan coach Juwan Howard isn’t allowed to take the floor come Tuesday.

Even discounting Livers and their 48-year-old former All-American patrolling the bench, the Wolverines still have plenty of experienced talent left in their lineup.

Guard Franz Wagner is averaging double figures for the second season in a row, while Brown, senior guard Eli Brooks and graduate transfer guard Mike Smith round out one of the most battle-tested backcourts in the country. Although its leading scorer and rebounder, 7-foot-1 center Hunter Dickenson, is a freshman, he’s started Michigan’s last 22 games – 16 of which came against tournament-bound squads.

Brooks and forward Austin Davis are the only remaining rotation players who helped guide the Wolverines to their last Final Four in 2018, which is far more experience than the Bruins have at that level.

Sophomore guard/forward Jaime Jaquez Jr. and sophomore guard Johnny Juzang, despite averaging a combined 36.8 points per game in the NCAA tournament so far, hadn’t played a minute of March Madness basketball prior to last week. Cronin will be coaching in his first career Elite Eight on Tuesday, while Bernard was eight years old the last time UCLA made a Final Four run back in 2008.

Bernard and the Bruins are 40 minutes away from extending their stay in Indianapolis another week, and the spotlight will be shining on them Tuesday night.