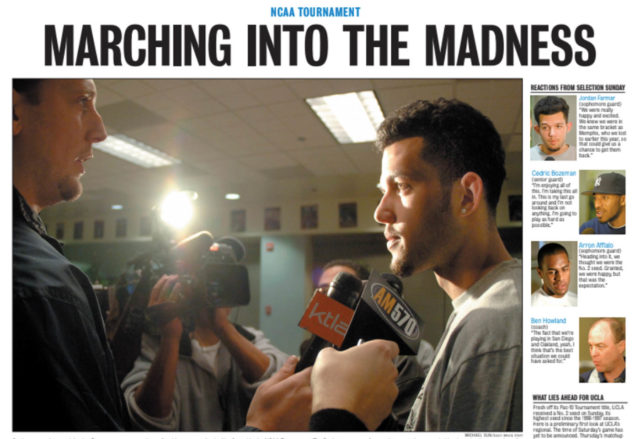 UCLA men's basketball will face Gonzaga in the NCAA tournament Saturday. Fifteen years ago, the Bruins and Bulldogs played in the Sweet 16, with the former pulling off a remarkable comeback. (Daily Bruin archive)

INDIANAPOLIS — Gus Johnson’s call is almost as iconic as the play itself.

“And a steal, Farmar,” Johnson yelled. “Inside, the freshman, oh! Raivio, last chance to dance – oh, what a game! UCLA, unbelievable! After being down by 17, heartbreak city!”

That screaming soliloquy and the image of forward Adam Morrison breaking down in tears have stuck in the front of Bruin fans’ brains for 15 years now, ever since their team completed the historic comeback over the Bulldogs on the nation’s biggest stage.

Now, they’ll have a chance to do it all over again.

Then-No. 2 seed UCLA men’s basketball was looking to make its first Final Four in 11 years, facing off against then-No. 3 seed Gonzaga in the 2006 edition of the Sweet 16. It would eventually win the game 73-71 in, as Johnson put it, heartbreak fashion.

In some ways, the Bulldogs already got their revenge for the loss – they knocked the Bruins out in the Sweet 16 in 2015 – but the memory of the 2006 matchup still looms large heading into a 2021 Final Four rematch Saturday. After all, Gonzaga led for nearly the entire game 15 years ago and was well on its way to its second Elite Eight in program history and first under coach Mark Few.

Gonzaga was up by as much as 17 in the first half but saw UCLA trim that gap to six a few minutes into the second. That comeback was short-lived, however, as the Bulldogs would go back up by double digits to lead by 10 points with just over five minutes left in the game.

Morrison – a John R. Wooden Award finalist that season – had 22 points with seven minutes to go, and he later hit two free throws to get up to a game-high 24. The one issue for the Bulldogs was that those free throws that came with more than three minutes remaining were their final points of the night.

Gonzaga didn’t hit a field goal in the final five minutes, and its star player was 0-of-4 from the field in that stretch. Even amid the cold streak, the Bulldogs were still holding on to a three-point advantage with 20 seconds left as a career 59.1% free throw shooter, center Ryan Hollins, headed to the line for the Bruins.

Hollins hit both tries, setting up an inbounds pass that went Morrison’s way. Morrison flung it across the court to center J.P. Batista, whose turnover set off the chain of events that led to a near-deafening crowd reaction and Johnson’s bombastic play-by-play call.

Farmar’s steal with 14 seconds to go and his ensuing assist to forward Luc Richard Mbah a Moute underneath the basket gave UCLA its first lead of the night. Mbah a Moute’s stumbling, diving takeaway of guard Derek Raivio moments later robbed Gonzaga of its chance at a game-winning answer, and although they were able to get a potential game-tying shot off before the buzzer following a Bruin free throw, the damage had already been done.

Morrison was pacing around the court with a pout on his face, constantly pulling his jersey up over his head to wipe away the tears. His historic career as Gonzaga’s third all-time leading scorer looked like it could end in a title run, but instead, it ended at the hands of the Bruins.

A 17-point deficit had turned into a two-point UCLA win, and coach Ben Howland credited the grit his players showed when it counted most.

“That was a great finish for us,” Howland said. “It’s really just a testament to the character, the toughness, the heart of our players to have the never-quit attitude. I’m really, really proud of them.”

If that sounds at all familiar, it should. It’s pretty much exactly what coach Mick Cronin said after No. 11 seed UCLA’s Elite Eight win over No. 1 seed Michigan on Tuesday.

The ugly, defensive wins Bruin fans became accustomed to under Howland are making a return with Cronin. They beat the Wolverines 51-49, much like their 50-45 and 59-45 wins in the 2006 Elite Eight and Final Four, respectively, and Cronin continues to compliment his players’ buy-in and commitment.

Repeating history and beating Gonzaga on Saturday would send UCLA to its first national championship game since that 2006 season.

If these Bruins have the same toughness and so-called never-quit attitude of Farmar, Mbah a Moute, Hollins and company, they could very well pull off an upset and reduce the Bulldogs to tears once again.