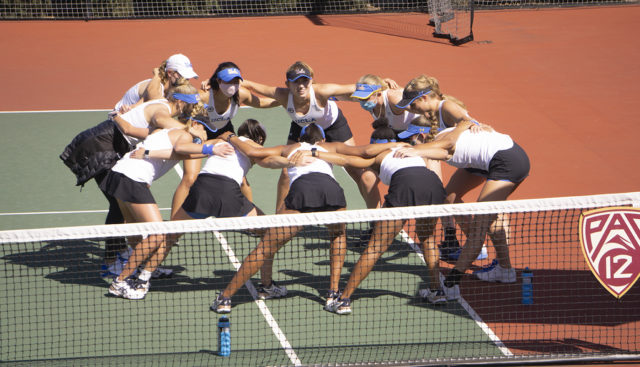 The Bruins head for a sweltering weekend in Arizona riding a three-match winning streak.

Hart’s long-term doubles partner, junior Elysia Bolton, has been out for the past three matches because of a severe ankle sprain, but coach Stella Sampras Webster said Bolton could possibly return to the doubles court over the weekend.

UCLA has an overall record of 18-6 against Arizona State and currently holds a three-match winning streak over the Sun Devils.

“I think it’ll be good,” Sampras Webster said. “Probably half of our team has never been (in Arizona), so it’s important for us to do well this weekend to continue our journey towards the end of our season.”

First serve against Arizona State will be on Friday at 1:30 p.m. in Tempe, Arizona.

The Bruins return to Westwood following their first road trip of the season.

The ITA changed its guidelines for ranking teams last week, leaving the Bruins unranked. Coach Billy Martin said he disagrees with the ITA’s new ranking criteria, though the Bruins are now in the rankings again.

“Well, computerized system – which is a joke,” Martin said. “Normally they don’t do that until half the year when they’ve got a lot more results, but they tried to do it with so few results it’s laughable.”

Despite the Bruins’ setback in the team rankings, they have been rewarded for their individual successes. The court one doubles team of seniors Bryce Pereira and Keegan Smith earned the No. 75 spot in the ITA doubles rankings while Smith also holds the No. 48 singles spot. Sophomore Drew Baird and junior Govind Nanda are ranked No. 81 and No. 116, respectively, and Nanda was voted Pac-12 Player of the Week for March 22-28.

Last week, junior Mathew Tsolakyan’s streak of 13 singles matches without a loss was snapped in a loss at Arizona. However, Tsolakyan said he was focusing on his next opponent as Pac-12 competition heats up.

“Not looking too far ahead, not looking back, just staying on the straight line,” Tsolakyan said. “Trying not to think about other stuff other than the next match.”

Martin said he expects challenges in the conference as the end of the season approaches.

“Lots of good teams in our conference this year and it will only make us better as we get towards our conference championships and, hopefully, the NCAA tournament,” Martin said. “We just got to try to do what we have to do and win matches and hope the ranking will work itself out.”

Last weekend, it was the defending champions. This weekend, the Bruins face off against the worst-ranked team in the conference.

San Jose State has lost five straight games against conference opponents and has been outscored by an average of 6.6 goals per game during the skid. The lone Spartan win this season came against a Santa Clara squad ranked No. 23 in the nation.

Nevertheless, freshman attacker Anneliese Miller, who has played in all six games to start her collegiate career, said UCLA is not underestimating this weekend’s opponent.

Miller – who said her role has shifted toward being more of a shooter – tied for the team lead in points last weekend against No. 2 Stanford, with five points over the two-game stretch.

In Saturday’s 12-11 loss to the Cardinal, Miller tallied two goals and two assists before tacking on another goal in Sunday’s win. The Danville, California, native added that the win boosted the team’s morale, but the loss highlighted some holes in the Bruins’ game.

“It’s definitely a confidence boost for the team,” Miller said. “But having the one loss against them definitely shows that we have a lot to work on.”

Like fellow freshman attacker Malia Allen, Miller pointed out defense as a potential point of growth in her first collegiate season. The first-year player also echoed the sentiments of coach Adam Wright, who said, after Saturday’s loss, that his team didn’t effectively handle Stanford’s movement.

“I think I can just be more reliable on the perimeter and be more helpful for my teammates who need help as there’s movement,” Miller said.

In a year where the UCLA water polo coaching staff spent more than a month bouncing between the men’s and women’s teams, Miller credits the Bruins’ upperclassmen with facilitating her adjustment to the college game.

“Our team is just incredibly supportive of everyone, whether it be cheering for each other, but also correcting each other when we mess up or need assistance,” Miller said. “The older girls have been super helpful in just helping adapt the younger girls to the game and just telling them what needs to be changed in order to succeed.”

UCLA will take the pool for the first sprint at 1 p.m. Saturday and Sunday.

After an extended break due to a canceled match, the Bruins will take on a top-10 team in Phoenix this weekend.

The Bruins were supposed to be playing against the No. 4 Pepperdine Waves on Wednesday, but because of COVID-19 concerns within the Pepperdine program, the match was canceled.

Coach John Speraw said he has been impressed with his team so far as it has won six of its last seven matches, but acknowledged there are things to work on to get a result against Grand Canyon.

“I think this team’s done a really nice job of improving throughout the course of the season in the areas that we bring some attention to,” Speraw said. “I think there’s some specific things that we can do this week. So we’ll take a look at that list and start getting to work.”

The Bruins and Antelopes first met Jan. 29, as UCLA was able to sweep Grand Canyon to open the season, winning 25-20, 25-22, 25-22. The leader in kills was sophomore outside hitter/opposite Cole Ketrzynski with 13 kills in the match.

Ketrzynski explained the team is going to be motivated and ready to play after nine days of rest.

“We are getting back to practice after a little time off, and we know what we have to work on,” Ketrzynski said. “We are going to work on that and gear up for our next couple games.”

The Bruins will be coming into the match on a two-match winning streak, after two wins against Stanford, while Grand Canyon is on a three-match losing streak after losing three straight to Pepperdine.

UCLA will face action against Grand Canyon on Friday at 6 p.m. and then again at 2 p.m. on Saturday.

Chesney is currently a Sports contributor on the men's tennis beat.

Li is currently a Sports contributor on the women's tennis beat.