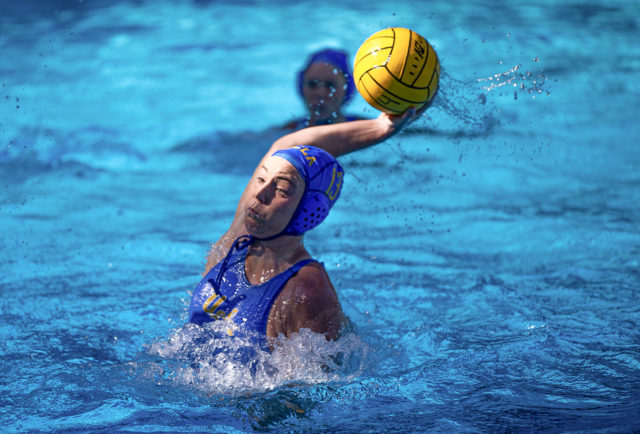 The Bruins’ second and third-highest goal totals of the season secured a conference series sweep.

Saturday’s game saw the Bruins jump out to a 6-0 lead in the first quarter, with five different players scoring, including junior center Ava Johnson with a pair of goals. UCLA failed to replicate its early success Sunday, trailing at the end of the first quarter 4-3 before entering halftime tied at six apiece.

“We definitely didn’t have the same spark and energy that we did (Saturday),” Johnson said. “We didn’t have our block up most of the time, which is an example of pretty bad awareness and energy. We just let some balls go in that were easily preventable. I think it all just comes down to our energy and our awareness.”

Holding SJSU to 6-of-30 in game one and 2-of-12 on power play situations, those numbers would nearly double to 11-of-26 shooting and 4-of-9 during six-on-five situations in the following game. Spartan utility Olga Descalzi Portell netted 1-of-5 attempts and added an assist Saturday before going 6-of-8 with two assists Sunday.

Redshirt sophomore goalkeeper Georgia Phillips got the start in the cage and went the distance in the first game of the doubleheader, recording five saves and allowing six goals, while senior goalkeeper Jahmea Bent played all of game two, registering seven saves but allowing 11 goals.

Coach Adam Wright – coming off a national championship win with the men’s team – reiterated that his team lacked energy in the second game.

“We definitely weren’t playing with the same energy on the defensive end, and we had people wanting to go to offense before we made stops,” Wright said. “Those are things that we can’t be doing. Also just our fundamental positioning was bad, (and) we didn’t help our goalie in certain situations. We show moments where we’re really locked in and doing a nice job, but then when it’s not there, it’s the other end of the spectrum.”

One area the energy remained constant, according to Wright, was with Johnson, who had four goals – three back-to-back in the fourth quarter – and five drawn exclusions in game two. The junior had registered a team high among active players with 103 earned exclusions entering the season.

“Her energy is incredible, you know, there’ve been moments where she’s literally carrying the group,” Wright said. “She’s tough to defend down there. … When she gets her hand on the ball, it’s pretty dangerous. So in the second half (Sunday), it was really fun to watch her. She does a really good job, and she’s reliable as well.”

Despite entering halftime tied at six Sunday, the Bruins outscored the Spartans 11-5 in the second half behind a 6-2 third quarter, similar to UCLA’s 5-2 third quarter the day before to take a 15-4 lead into the final stanza on day one.

Twelve individual Bruins had a point while 11 netted a goal Saturday, but those statistics fell to 10 and six, respectively, in the second game. Every player who scored Sunday had also netted a goal the prior day.

Sophomore attacker Hannah Palmer led the team over the weekend with seven goals on 11 shots while adding three assists, two steals and a drawn exclusion. Freshman attacker Malia Allen and Johnson followed close behind with six goals each.

After the conference sweep marked only its seventh and eighth games in nearly three months, UCLA will play four games in four days – two against No. 4 Arizona State in Tempe over the weekend before flying to Bloomington for two matchups with No. 15 Indiana on Monday and Tuesday.

“We definitely feel prepared for next weekend and for four games in four days,” Palmer said. “It does sound like a lot, but it will be really good for us and a really good test to see where we are. Like, where we are stamina-wise, where we are mentally, and where we are against ASU. We feel very confident. But it’s gonna be a real test for us to see what we need to work on going into like the final stretch of the season.”