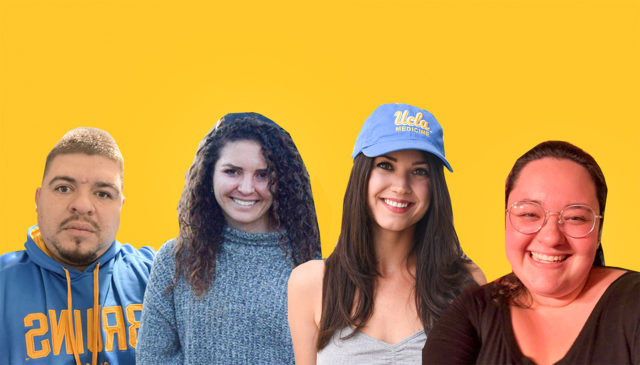 Every year, the Graduate Students Association holds a spring quarter election for four executive officer positions that aim to best represent the interests, needs and concerns of UCLA’s graduate student body. This year’s GSA election will run from April 6-12 on MyUCLA and you can read about each candidate on their election page. The Editorial Board spoke with most of this year’s candidates and deliberated upon which are best suited for their positions. Here are its endorsements:

Every candidate for GSA has a vision. Letty Treviño has one too – what makes her special, though, is her ability to achieve results.

Treviño has a combination of attributes that singularly qualify her for the role of GSA president: she is willing to dive into what will be an undeniably difficult term, and she has the strategy, connections and know-how to come out of it having created tangible progress. Based on her extensive involvement on campus, her platform’s equity-based approach and her endeavors to create lasting institutional policy, the Editorial Board endorses Treviño for the position of GSA president.

Treviño, a doctoral student running with the BEAR slate, has worked in many different corners of campus for the past five years. This year, she served as the vice president of academic affairs in GSA, where she sat on and advised the Academic Senate, served on more than 20 committees as a graduate student representative and worked with United Auto Workers Local 2865 to provide a nonresident supplemental tuition exemption waiver for international students. Her office also distributed the GSA Hardship Fund, which was established at the beginning of the COVID-19 pandemic.

In her time as vice president of academic affairs, Treviño has come to know the ins and outs of academic bureaucracy. Most importantly, she leverages that knowledge to advocate for historically uninvested and overlooked communities on campus – including students of color, international students, students with disabilities and parenting students, all of whose interests are placed at the forefront of her platforms.

For the past half-decade, Treviño has consistently centered activism and equity into her work as she navigates the institutions of higher education to create meaningful policy changes. Based on her track record, this Board has no doubt she will do more of the same great work as president.

2021 will be a difficult year, but if anyone can ensure progress, it is Treviño.

The editorial board endorses Rodrigo Vazquez for vice president of internal affairs but acknowledges both candidates represent two platforms that are both worthy of consideration.

He has no GSA experience but has extensive experience as an activist and with policy for Black and brown communities. Both are things that would invariably quicken his transition into the role.

His opponent, Lewis Luo, comes with extensive GSA experience. Particularly, he currently serves as the director of discretionary funding, a position directly relevant to the vice president of internal affairs role. But Luo’s experience shouldn’t be used against him. He also comes from the School of Dentistry and would represent a portion of the student body otherwise disconnected from student government.

But a vote for Vazquez would be an important gesture toward reaching equity at the university level. Ultimately, he may not come in with a complete understanding of GSA or the vice president of internal affairs position. But his slate’s name, “Bruins Breaking Barriers,” is aptly relevant.

The board encourages voters to look closely at both candidates and what they represent before making a decision. Still, equity is important, and a vote for Vazquez would be more than a symbolic gesture toward making that a reality.

One must learn the rules before they can break them.

This board endorses Neda Ashtari for GSA vice president of external affairs for her track record of success in both navigating and reshaping the University of California and UCLA bureaucracy.

Ashtari, who currently serves as the vice president of external affairs and as a legislative aide to California State Senator Sydney Kamlager, has proven herself to be uncommonly effective. Coming from this board, that’s high praise.

During her tenure, Ashtari established the Bench to Bill program, which helps to place graduate students in state congressional offices to ensure student voices are heard and policymakers stay current with cutting-edge scholarship. Ashtari also spearheaded the successful push to establish the Culture of Healthy Mentorship program, which seeks to connect students with faculty at the David Geffen School of Medicine on level footing.

In a potential second term, Ashtari said she hopes to build on her work connecting students and legislators. The inaugural Bench to Bill pilot, for example, will launch in the coming year with plenty of room for expansion and improvement. But Ashtari brings fresh approaches as well, including new goals to set standing meetings between academic councils and state representatives and to develop an online portal for students to submit policy ideas to their legislators.

To be fair, Ashtari’s opponent, Brandy Compton, has good ideas for what she wants to do if elected. Compton, a social welfare graduate student, is running on two campaign promises: allocating resources to meet basic needs and increasing program affordability. Compton also wants to advance the needs of underrepresented students, such as formerly incarcerated students, students with dependents, and students experiencing homelessness. While she has the passion to do the job well, Compton doesn’t have concrete plans to execute her goals – something critical to turn her ideas into reality.

With so many big projects already under her belt and plans for even more exciting initiatives, this board trusts Ashtari to once more serve the graduate student body well in the coming year.

This board endorses Isabel Benvenuti for GSA vice president of academic affairs for her strong involvement with and passion for academic policy.

In her work as director of academic senate and academic affairs, Benvenuti has proven herself to be a champion for equity and non-discrimination. Her specific efforts to remove the GRE requirement and incomplete notations from student transcripts demonstrate an intimate understanding of the barriers many graduate students face.

And if she were to have a term in office as vice president of academic affairs, Benvenuti said it would be much of the same: listening to students, advocating for their concerns to the administration and even moving efforts to the UC-wide Academic Senate to enact lasting change.

It is important to note that while Benvenuti’s opponent Noel Navarro lacks experience within GSA, he retains 19 years of leadership in corporate finance. It’s not often that candidates enter GSA with such extensive outside resumes, and Navarro could potentially add a unique and effective point of view to the role.

Still, Benvenuti already has hands-on experience in most of the areas she would work in as vice president of academic affairs, which translates to a supply of unmatched institutional knowledge.

Benvenuti’s work under current Vice President of Academic Affairs Letty Treviño speaks for itself. She knows the role, she’s familiar with the policies she would be interacting with and she’s in tune with student needs.

And that gives her the potential to advocate for students during what could very well be a chaotic academic year.