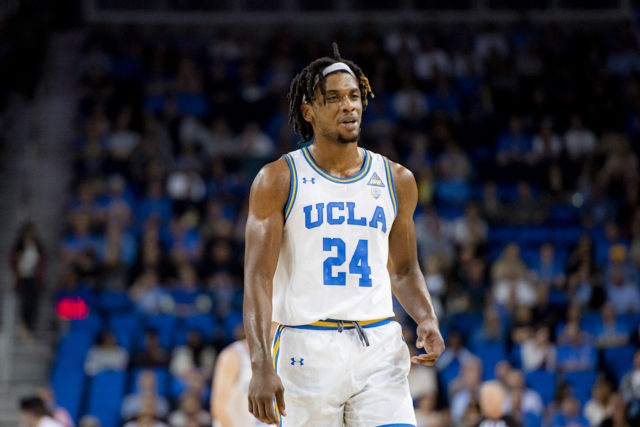 Redshirt junior forward/center Jalen Hill started 40 games for UCLA men’s basketball over three active seasons, but he has decided to step away from the game and the team. (Daily Bruin file photo)

INDIANAPOLIS — One of the few missing pieces from the Bruins’ Final Four run won’t be taking the court again.

Redshirt junior forward/center Jalen Hill stepped away from UCLA men’s basketball in February because of undisclosed personal reasons, and according to an initial report by Bruin Report Online on Monday that was later confirmed Tuesday by Hill on Instagram, he will be stepping away from the sport for good.

“I’m done with basketball,” Hill said in the Instagram video. “And I’m cool with saying that.”

Hill played 77 total games for the Bruins and started 40, missing his entire freshman season after being suspended for shoplifting and getting arrested in Hangzhou, China, back in October 2017. Hill cited mental health issues for why he left the team, ones he said first cropped up during the China incident and started to resurface during the COVID-19 pandemic.

“I decided to distance myself because of the headspace I was in, it was damaging the team,” Hill said. “I had a bunch of anxiety and depression problems, and it started when I was arrested in China at 17 (years old). It was a lot for me, and I didn’t really want to open up.”

Redshirt junior forward Cody Riley and guard LiAngelo Ball were arrested along with Hill in China, with Riley also serving a full-year suspension and Ball dropping out of UCLA before the end of that fall quarter.

Hill averaged 6.5 points, 5.9 rebounds and 1 block per game in 18.6 minutes per game of action off the bench this year, missing the first two games of the season with right knee tendonitis and then leaving the team ahead of the crosstown rivalry game against USC on Feb. 6.

“When I (took a step back), it was a whole new life,” Hill said. “I’ve never felt this happy before in my life. I just wake up and I’m just happy to be alive. And it sounds crazy to say it, but it’s just true.”

The big man said his decision has nothing to do with his UCLA teammates or coaching staff – even going as far as to call coach Mick Cronin “the GOAT” – congratulating them on their Final Four run that came to a close on Saturday in Indianapolis.

“My concern with Jalen is his well-being – he knows that,” Cronin said when asked about Hill on Feb. 16. “He’s in contact with guys on our team, and we’re just trying to make sure that he knows he has our love and support.”

With Hill out the door, Riley, redshirt sophomore forward Kenneth Nwuba and freshman forward Mac Etienne are the only big men projected to be on next year’s roster. Rumors have circulated about Cronin and his staff looking to the transfer portal in the offseason to fill Hill’s shoes and use the scholarship he vacated, but no one has publicly committed to the team as of Tuesday.

Hill finished his UCLA tenure with 504 points, 489 rebounds and 61 blocks on 54.6% shooting. No other active Bruin has more career rebounds or blocks than Hill, who was an honorable mention for the Pac-12 All-Defensive Team in 2020.

Connon is currently a Sports senior staff writer for the football, men's basketball and baseball beats. He was the Sports editor for the 2019-2020 academic year, an assistant Sports editor on the baseball, men's soccer, cross country, men's golf and women's golf beats from 2018-2019 and a reporter on the baseball and women's basketball beats from 2017-2018. Connon also contributes movie reviews for Arts & Entertainment and co-hosts Daily Bruin Sports' weekly podcast, "Out of Bounds." Connon is a fourth-year Communication student from Winchester, Massachusetts.