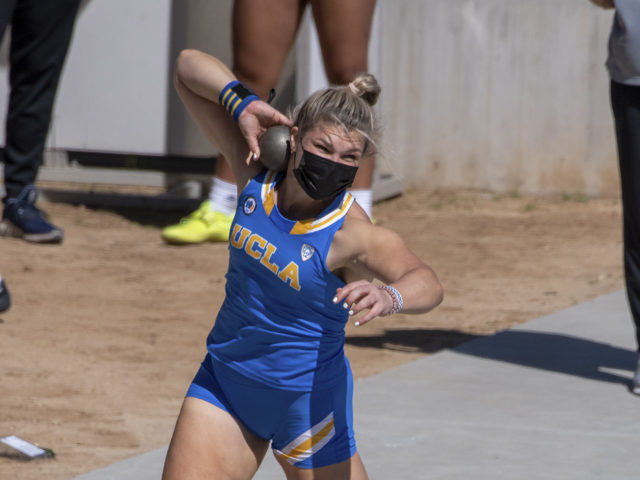 After a hectic week during spring break, the Bruins participated in a much less busy weekend.

UCLA track and field traveled up north for the Stanford Invitational after competing in four competitions throughout Southern California last week. The Bruins competed against several conference and nonconference opponents.

After earning just one event victory over the first day of the competition, UCLA picked up the pace and racked up nine victories across several events Saturday, while also seeing several athletes pick up career milestones.

On Friday, senior Ilaria Casarotto earned the Bruins’ only win of the day in the javelin, throwing a career-best best 51.72 meters (169-08). At the same time, she rose to No. 2 on the UCLA all-time javelin performance list.

Redshirt junior Alyssa Wilson also continued her hot start to the season. After being named the Pac-12’s Women’s Field Athlete of the Week with six event victories last week, Wilson tossed 66.38 meters (217-09) in the hammer to pick up a second-place finish, while also taking first place in the shot put and third in discus on day two. Despite the top-three finishes in all her events, Wilson said she was not completely satisfied with the results.

“I wasn’t really happy with my distances just because we had to go train off campus for the hammer,” Wilson said. “It’ll just add to my drive to go into the right direction in the future.”

One notable takeaway for Wilson was that she came in second to the defending hammer national champion, Camryn Rogers of California, which she said helped pick up her competitive drive.

“Being able to go up against the past national champion kind of added to like the competitive mindset, which was really good,” Wilson said. “I haven’t had such a really competitive meet up until this competition.”

Wilson’s return to competition comes after a bout of COVID-19, which she said kept her out of practice for 30 days. However, she wasn’t the only track and field athlete whose season preparation was affected by the pandemic.

Junior Kenroy Higgins II also said he contracted the virus before the season started. While he tried to make his season debut before indoor competition started, a hamstring injury pushed his season debut to this past weekend.

“I didn’t know where I’d be at the start of the season,” Higgins said. “So it was good to be able to open up a run healthy again.”

Higgins won the 100-meter with a time of 10.69 while anchoring the 4×100-meter relay to victory. Despite the obstacles preparing for the season, he said he felt satisfied with the results from the weekend.

“I didn’t start sprinting until March,” Higgins said. “It was good for me. We have a lot of people who are starting to come around, starting to feel healthy again. Everybody’s happy to be competing again.”

UCLA continues its season with two meets next week. It will host the Rafer Johnson/Jackie Joyner-Kersee Invitational at Drake Stadium on Thursday and Friday.

Garcia is currently a reporter on the men's water polo and swim & dive beats. He was previously a contributor on the track & field beat.