‘The Falcon and the Winter Soldier’ season 1 recap – episode 4: ‘The Whole World Is Watching’ 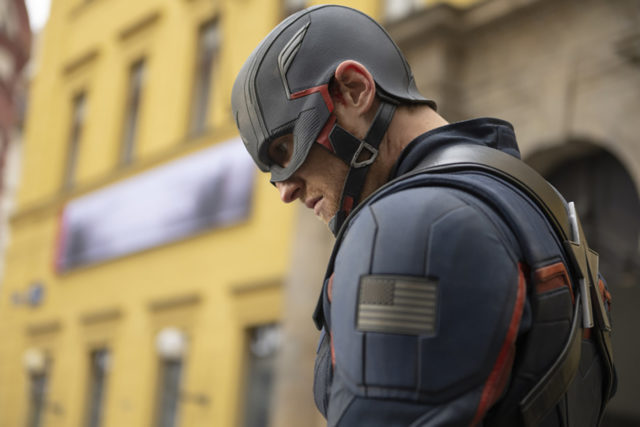 "The Whole World Is Watching"

The icons of both the Flag Smashers and the Avengers are destabilizing and crumbling.

Although the plot is exciting in its unfolding, the scarce comedy injected into the episode feels largely forced, undermining the urgency and the dialogue’s flow. Such unnecessary pauses manifest in instances such as Barnes clarifying that they are friends with the Avengers, not the Nazis, as well as Wilson referring to his aunt as his “TT” during mission planning.

Aside from the ill-timed comedy, the team attempts to locate the funeral for Donya Madani (Veronica Falcon) – also known as “Mama Donya” to refugees she cared for during the Blip – believing Morgenthau will be present. Zemo locates the funeral but leverages the information for his own security, re-cementing the fracture between himself and the titular heroes despite their brief union.

The episode then turns to Morgenthau, who picks up her stash of stolen serum and begins to question her plan to create more Super Soldiers, sparking the possibility of her redemption. However, a fellow Flag Smasher soon reassures her to stick to their plot.

John Walker (Wyatt Russell), the new Captain America, and Lemar Hoskins (Clé Bennett), Walker’s partner, subsequently join Wilson and Barnes to fight the Flag Smashers. But a rift appears as Wilson insists on trying to reason with Morgenthau while Walker asserts that Wilson will not be able to handle a Super Soldier – a projection underscoring Walker’s own vulnerability and lack of success against them.

Hoskins, however, convinces Walker to let Wilson try talking for 10 minutes and the latter nearly manages to make Morgenthau reconsider the violence she has used in the name of her cause. But Walker – jealous and scornful of Barnes’ Super Soldier status – soon impatiently storms into Wilson’s unfinished discussion, chasing Morgenthau away.

Zemo then finds Morgenthau and fires at her, spilling the vials of serum from her satchel. He crushes the vials, but Walker sinisterly finds one vial left untouched and quietly pockets it without notifying his teammates, clearing the path for a crack in his moral code.

[Related: ‘The Falcon and the Winter Soldier’ season 1 recap – episode 2: ‘The Star-Spangled Man’]

Later, Zemo questions if Wilson would have taken the serum if offered and is met with a clear “no,” implying that Wilson may have made the wrong choice in giving up Captain America’s shield. The moment starkly contrasts Wilson’s clear ethics and self-assurance against Walker’s recklessness and insecurity.

Discussing the possibility of acquiring the serum, Hoskins suggests that the serum simply makes people “more themselves,” such as with Steve Rogers and Morgenthau. But the suggestion raises a red flag in foreshadowing the end of the episode, as the new Captain America’s truer self might just be a vicious one.

After threatening Wilson’s sister Sarah (Adepero Oduye), Morgenthau asks Wilson to either join her or let her go. Reluctant to fight, she reestablishes some of the reason and care that originally made her goal more sympathetic. Walker soon attacks again, revealing super strength that makes it clear he has taken the serum. Walker’s selfish, self-made decision to use the last vial for himself further proves that his lack of cooperation and integrity are unfit for the mantle he holds, but indicates that the series intends to explore his role as full-fledged Captain America and what that may mean for the Avengers.

Barnes and Wilson cooperate smoothly to locate Walker and Morgenthau and join the fight, now seeming to hold enough mutual respect to quickly direct each other without their previous disobliging interactions. But despite the serum, Walker’s rashness and solitary style leads him to lose the fight, losing Hoskins to a volatile Morgenthau in the process.

Enraged, Walker chases the closest Flag Smasher into a plaza and raises his shield – a possible allusion to Rogers raising his shield above Tony Stark in “Captain America: Civil War,” in which Rogers’ principles stop him from dealing a deadly strike. But Walker appears the exact opposite of Rogers’ righteousness, and in a dangerous echo of Hoskins’ own words, may be “more himself” as he stains Captain America’s shield with blood.

The stage has been set for a change in loyalties, but hopefully the next installment of “The Falcon and the Winter Soldier” will also explore the changing power dynamic between Barnes, Wilson and Walker – the newest Super Soldier.