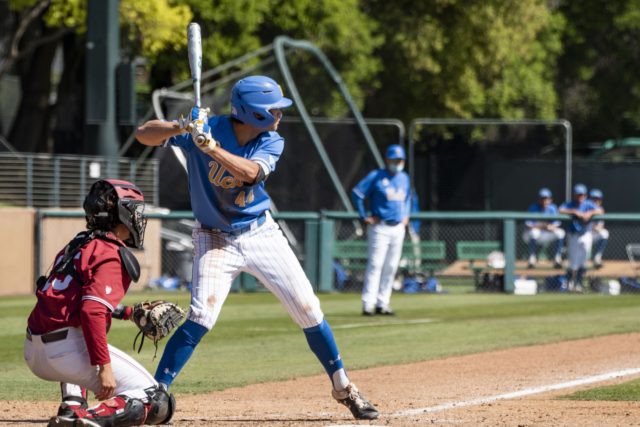 In a game of wild pitches and extended innings, a couple of firsts lent some weight to an otherwise blowout win for the Bruins at Jackie Robinson Stadium on Tuesday night.

And after losing four out of five, UCLA has now won two games in a row.

Junior right-hander Nick Nastrini made his first start in about three weeks after getting moved to the bullpen on the weekends, and although he was able to escape the first inning with a zero on the board, he walked two men and allowed one to get as far as third after two wild pitches. The Lions would make Nastrini pay for his two-out walk in the second, with center fielder Kenny Oyama knocking a double to deep right center that scored two.

Back-to-back walks with one down in the third spelled the end of Nastrini’s night. The five total walks by the righty were in line with his recent control problems, as he now boasts 10.6 walks per nine innings over his last eight outings and a 10.95 ERA across his last six.

Colwell was able to get UCLA out of the third unscathed by striking out two batters and stranding the men he inherited from Nastrini.

“Nick’s a hell of a pitcher, and it felt really good to be able to pick him up out there,” Colwell said.

The Lion hurlers didn’t fare much better, however, which is why Nastrini left the game with the Bruins still up by one – a lead they would extend even further in the third inning.

Three walks, a hit-by-pitch, three wild pitches and a sac fly led to two UCLA runs in the first, while a hit-by-pitch and wild pitch put freshman designated hitter Daylen Reyes in position to score the Bruins’ third run of the night in the second off a single by senior left fielder Pat Caulfield.

The bottom of the third saw 11 Bruins step up to the plate and five more runs go up on the board to put them up 8-2. A stretch of six straight batters getting on base fueled UCLA’s big inning, with Reyes’ bases-loaded walk bringing in a run and setting up a three-RBI double by freshman third baseman Kyle Karros, who came around to cross the plate as well on a single by redshirt junior center fielder Kevin Kendall.

“I went down 0-2 quickly, so at that point, I’m not expecting to do much with that at-bat,” Karros said. “To see that ball get called fair and walk out of there with a three-RBI double, I was pretty pumped with that.”

Three more insurance runs came across in the fifth to make it 11-2, and Karros smashed his first career home run over the left-field wall to make it 12-2 in the sixth.

On his way back into the dugout, Karros’ teammates swarmed him and cheered him on for his accomplishment.

“I was absolutely fired up,” Karros said. “Meeting my teammates (at home plate) and getting back into the dugout, that was pretty crazy. Obviously, all of them were excited for me and rooting for me, so it’s pretty cool to have them all behind me.”

Karros’ father Eric, who played for UCLA in the 1980s and went on to jack 284 MLB home runs, was in the stands Tuesday night to watch his son’s milestone. Kyle Karros said his dad caught the at-bat on video and texted it to him during the game congratulating him on his first homer.

But while the long ball stood out as a big family moment, it was also the definition of an insurance run that didn’t end up changing the outcome of the game, which was thanks in large part to the Bruins’ bullpen.

Right-handers junior Jack Filby, senior Adrian Chaidez, sophomore Charles Harrison and freshman Max Rajcic each tossed a scoreless frame – and Chaidez’s three-strikeout seventh inning got the dugout buzzing – but it was Colwell who took the torch from Nastrini and got credited with his first career win.

“It feels good, man – it’s been a long time coming,” Colwell said. “Obviously stats aren’t the end-all, be-all, but it felt kind of good to get out there and stretch my legs for longer than I’ve been able to before.”

Colwell’s scoreless 2.2 innings of work and 35 total pitches were both career highs for the southpaw, and he said he had to beg director of baseball operations David Berg to let him back out for the fifth. Colwell only needed 10 pitches to get out of the frame, and he was able to preserve UCLA’s lead amid its string of big offensive innings.

The Bruins did all of that – managing an efficient bullpen game and putting up double-digit runs for the ninth time this season – without coach John Savage, who was serving a suspension for his ejection against Stanford on Saturday.

Savage will be back to head up UCLA’s dugout in its weekend series against Utah starting Friday at 6 p.m.

Connon is currently a Sports senior staff writer for the football, men's basketball and baseball beats. He was the Sports editor for the 2019-2020 academic year, an assistant Sports editor on the baseball, men's soccer, cross country, men's golf and women's golf beats from 2018-2019 and a reporter on the baseball and women's basketball beats from 2017-2018. Connon also contributes movie reviews for Arts & Entertainment and co-hosts Daily Bruin Sports' weekly podcast, "Out of Bounds." Connon is a fourth-year Communication student from Winchester, Massachusetts.