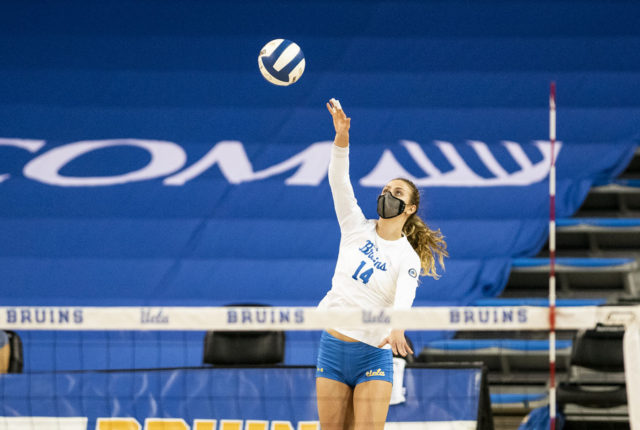 In a year of canceled matches and postponements, the Bruins have found themselves with an extra game on the schedule.

UCLA women’s volleyball (14-6, 14-6 Pac-12) earned a spot in the upcoming NCAA tournament and will take on Rider (7-4, 4-4 MAAC) in the first round Wednesday in Omaha, Nebraska. Despite being ranked No. 15 in the nation, the Bruins missed out on a top-16 seed and a bye to start their tournament run.

Should UCLA advance, No. 16-seeded BYU (16-1, 15-1 WCC) will be waiting for it Thursday to determine who will play in the regional semifinal.

Coach Michael Sealy said the additional first-round game will give the Bruins some much-needed playing time, considering his team is over two weeks removed from its most previous opponent.

“Usually teams are used to playing and rolling right into the tournament next weekend,” Sealy said. “We haven’t played a match in a few weeks and I think having the play-in game, the next opportunity to play is a good thing.”

Senior outside/opposite hitter Mac May also echoed Sealy’s comments, adding the extra practice and repetitions will help ease some nerves on the team should it win over the Broncs.

This year, the NCAA cut the tournament pool down from 64 teams to 48, and the remaining 32 unseeded teams will play in the first round.

UCLA has appeared as an unseeded team in the tournament before, including last season’s playoff run when it fell to eventual runners-up Wisconsin in the second round. For the second season in a row, the Bruins are in the same region as the No. 1 ranked and seeded Badgers (15-0).

Junior transfer libero/defensive specialist Zoe Fleck said UCLA has the keys to making a deep tournament run, as she drew upon her experience last year in a different program versus a different high-seeded team.

“I came in as an underdog at (UC Santa Barbara) playing the No. 2 seed Texas,” Fleck said. “No one was really expecting us to be good or get anywhere close to Texas, and I think that allowed us to play freer than we typically could and more free than what Texas could.”

The Bruins were expected to perform better at the start of the season, as they were voted to finish fourth in the Pac-12’s preseason coaches poll. After a slew of victories over current tournament teams such as Oregon, Washington State and Washington, UCLA sat at No. 12 in the national rankings. Losses to Colorado, USC and Utah dropped the Bruins to their current ranking and fifth in the Pac-12.

Throughout the season, Sealy has said the pandemic and lack of inter-conference has made it difficult for schools and the tournament committee to gauge how teams would fare in the playoffs. On Tuesday, he mentioned a similar sentiment.

“The two things are unrelated,” Sealy said. “A Pac-12 ranking based on (COVID-19) protocols and how you’re going to rank the conference has nothing to do with NCAA selection.”

The Pac-12 sent five teams to the tournament, including the aforementioned No. 6-seeded Huskies, No. 10-seeded Ducks, No. 14-seeded Utes and No. 15-seeded Cougars. The Bruins were the only unseeded team from the Pac-12, a conference that was only second to the Big Ten in terms of tournament teams.

Despite her coach’s expressed point of view, May said UCLA’s regular-season slate could play a big role this April.

“I think the experience our team has had from playing in the Pac-12 has really benefited us,” May said. “I think moving forward into the tournament we will have had a lot of great practice going into it.”

The Bruins will begin their tournament run against the Broncs on Wednesday evening at 7:30 p.m.

On April 9, a Twitter thread by Big Ten analyst Emily Ehman revealed the tournament conditions in the COVID-19 controlled bubble in Omaha.

The Tweets included reports that the tournament would not have ESPN broadcast crews/commentators for the first two rounds, which includes UCLA’s first-round game against Rider. Ehman also added the venue’s practice courts were on unsafe cement flooring.

Just got word that the first two rounds of the @NCAAVolleyball Tournament will NOT have broadcast crews/commentators.
This is absolutely unacceptable. Teams have been preparing for over a year and a half for this opportunity. We need to be better. @NCAA

Per multiple @NCAAVolleyball coaches, the 8 practice courts in the convention center are sport court layered over cement flooring.
This is very high risk for injury and NOT suitable for players' safety — especially any players jumping repeatedly.

Ehman’s tweets prompted internet criticism towards the NCAA tournament committee, with many citing unfair treatment and likening the tournament’s shortcomings to that of the women’s basketball tournament in March.

The NCAA responded to the backlash with their own official statement on Twitter before it reversed its original decision on commentator coverage and announced it would provide weight rooms for the teams April 9.

Fleck, who arrived in Omaha with her team Sunday, said the shortcomings of the tournament could be pointed out, but the team is still glad to have the opportunity to play.

“I think there are a lot of things we could pick apart about the inequities,” Fleck said. “But at the end of the day, we get to play and I think we as a team are very grateful to be here.”

Palmero is currently a Sports contributor on the beach volleyball and women's volleyball beats.