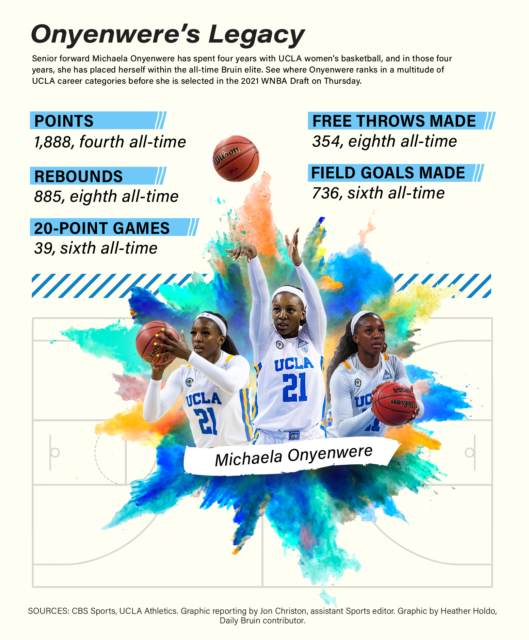 On Thursday night, UCLA women’s basketball will have one of the most decorated players in program history drafted into the professional ranks.

But Michaela Onyenwere didn’t expect her UCLA career to end this way.

In fact, she was certain that it wouldn’t.

“I wouldn’t have pinned myself as about to be in this position about to go to the draft four years ago,” Onyenwere said. “(Coach Cori Close) would ask sometimes in the film room, ‘Who wants to go pro?’ and I never raised my hand. I knew for sure my freshman year that basketball was going to be over for me after college.”

Fast forward a few years later, and it turns out her freshman self was wrong.

When a WNBA franchise selects the former Bruin forward in the league’s 2021 Draft on Thursday evening, it will be drafting a player who finished inside the top 10 for several all-time UCLA statistical rankings.

Yet when you ask her former UCLA family to describe Onyenwere’s legacy within the program, they don’t even mention the record books.

“Michaela has really set the standard of what a Bruin should be,” said sophomore guard Charisma Osborne. “Our team is going to remember her for how hard she worked and how consistent she was. (She’s) someone that anyone can go to regardless of what your role is on the team – that’s super important in a leader and someone that we all look up to.”

Osborne, who spent the season as Onyenwere’s roommate, said the outspoken leader of this past season was much different from the quiet teammate she met two years ago.

“My freshman year when she was a junior, Michaela wasn’t the most vocal person,” Osborne said. “To see how much more vocal she has gotten by the end of her senior year – it was just really cool to see her just kind of step out of her comfort zone and just be a more vocal leader.”

For Close, the growth she’s seen in Onyenwere dates back even further.

Back when Onyenwere was a high-schooler in Aurora, Colorado, Close said she was attracted to Onyenwere’s hustle, hard play and aggressive effort on the court.

Though when Close actually met the Grandview High School basketball star, Onyenwere’s quietness contrasted her tenacity on the court – so much so that Close doubted her ability to recruit the future Bruin.

“Michaela hated recruiting – I mean hated it with a capital H – and tried to avoid us at all costs,” Close said. “I remember doing an in-person visit at her school with her family. (Onyenwere’s brother) was in elementary school I think, and I think he asked more questions in the visit than Michaela did. I remember driving out of there – I was like, ‘How in the heck are we ever going to get her?’”

Not only did Onyenwere indeed choose UCLA, but understanding and developing the power of her voice is where she’s grown the most, according to Close.

After committing to being a Bruin, Onyenwere joined the women’s basketball program’s Leaders in Training program and eventually grew her voice by becoming a team captain.

With the help of several of her teammates, Onyenwere helped launch UCLA women’s basketball’s More Than a D.R.E.A.M. campaign, which is centered around racial justice, following the death of George Floyd last summer.

She also was one of the few Bruin players that host Bruin Table Talk, a video series interviewing and highlighting prominent Black UCLA alumni.

Close said the shy-recruit-turned-prominent-voice is a role model she can tell future UCLA recruiting targets about.

“When I look at her legacy, she’s going to be one of those people that we talk to recruits about for years to come,” Close said. “We’ll say, ‘Look at what she did on the court, look at the long pro career she had and look at the impact she had on her teammates, – look at how you can be an incredibly strong, giving, character person.'”

While Onyenwere acknowledged the leaps she has made both on and off the court, she said she’s still surprised people look up to her, like freshman guard Dominique Onu.

“(Coach Shannon Perry-LeBeauf) said, ‘Dominique, she just admires you so much, she looks up to you so much and she just thinks you’re just like a phenomenal leader,’” Onyenwere said. “I was like, ‘What?’ Those realizations of those moments, that’s what really reinforces I’m doing the right thing. I can say that I’ve grown in that area.”

In addition to her growth as a leader away from the game, Onywenwere will certainly be remembered by coaches, teammates and fans for her development as a player, according to Close.

While Close admired her athleticism and drive as a high school prospect, she admitted the 6-feet-tall forward possessed an unpolished basketball skillset that carried into her freshman year, traits that largely had to do with how new the game of basketball was to Onyenwere.

Despite this – and despite averaging just 6.9 points per game in limited minutes her freshman year – Onyenwere received the ultimate vote of confidence from her coach.

“She was like, ‘Look I need you to be the go-to player,’ and I literally was like, ‘What is she talking about I just got here,’” Onyenwere said. “For her to push me in that way and see something in me that I didn’t really even see in myself at that time was just really cool. When you have people who believe in you, who really care about you, you literally can do anything.”

Even with constant skill improvements, she never lost the trait that first attracted Close – her hustle.

In addition to leading the Bruins in scoring her final three seasons, Onyenwere also averaged 7.2 rebounds per game during her career and led the team in rebounding all three of those years as well. She ultimately finished eighth on UCLA’s all-time rebounding list as a result.

But while a WNBA team will draft her Thursday night because of her past and future achievements as a basketball player on the court, Michaela Onyenwere wants her full legacy to tell the entire story.

“I think legacy is so important – that goes way further than just the record books,” Onyenwere said. “I hope people don’t remember me as just the person who passed all these people for scoring or whatever else. I hope people remember me for the person that I was and the teammate that I was. The extra stuff is just a plus.”

Carlson is currently a reporter on the women's basketball beat. He was previously a contributor on the softball beat.