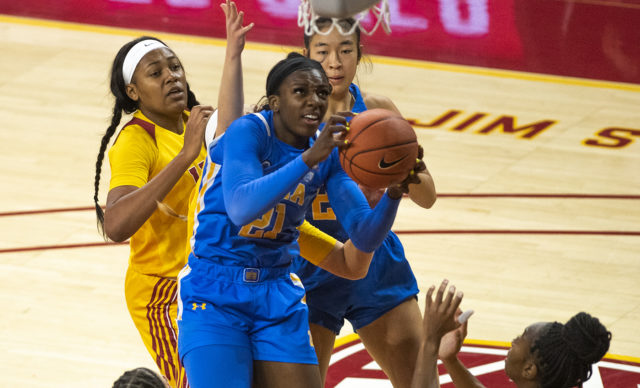 After four years in Westwood, Michaela Onyenwere is heading to the Big Apple.

The New York Liberty have selected the former UCLA women’s basketball forward with the sixth overall pick of the 2021 WNBA Draft on Thursday, which was once again held virtually because of the COVID-19 pandemic.

She will be joining last year’s No. 1 overall pick and former Oregon guard Sabrina Ionescu – who will be returning next season from an ankle injury that ended her rookie season after just three games.

“It’s nice not having to go against (Ionescu) anymore. We definitely had our battles in college,” Onyenwere said. “I’m really excited to have her, a great player, and get to know her off the court. … I’m excited for her crazy passes and just having another great basketball player alongside me.”

Onyenwere will also team up with her former Colorado AAU teammate, forward Kylee Shook. Onyenwere became the highest drafted player from Colorado in WNBA history Thursday, an honor previously held by Shook, who was selected with the 13th pick in 2020.

The Liberty are coming off a 2-20 season, good for the worst record in the league, and are currently set to add at least three more draftees later Thursday night. Onyenwere will have a chance to contribute right away for her new team, which lost its leading rebounder in the offseason and has no forward on the roster who averaged more than six points per game.

Onyenwere is the second Bruin to be drafted in the top 10 since 2008, joining her former teammate and current Seattle Storm guard Jordin Canada, who was selected fifth by the Storm three years ago.

The forward from Aurora, Colorado, immediately made an impact as a freshman in 2018, averaging 6.9 points per game off the bench to help the Bruins earn their first Elite Eight appearance since 1999. She went on to start all 88 of her games played across the following three seasons, increasing her scoring average each year. UCLA finished no lower than fourth in the Pac-12 with Onyenwere on the roster.

During her senior season, she led her team in scoring for the third consecutive year by putting up 19.1 points a game, good for second in the Pac-12, while also pulling down 7.2 boards a game to rank fifth in the conference.

Despite her team’s early exit in the NCAA tournament this season, Onyenwere stepped up her game once again in the postseason. She averaged 23 points and six rebounds in two NCAA tournament games after putting up 22 points, 3.3 rebounds and two steals per game in the Pac-12 tournament, in which UCLA lost the championship game to eventual national champion Stanford.

Onyenwere racked up plenty of accolades while putting her name in the record books throughout her time at UCLA. She finished her collegiate career fourth on the UCLA all-time scoring list with 1,888 points while also ranking in the top 10 in total rebounds, field goals made and attempted, free throws made and attempted and 20-point games.

“At UCLA, (coach Cori Close) would always say it’s not about how many points you score or how many championships you win. It’s about who you impact and what your legacy is, so moving onto this chapter, I’m going to continue with what she said,” Onyenwere said. “I’m looking forward to bringing that on the court but also off the court as well.”

Onyenwere will be joining the Liberty for training camp in a few days for the start of her professional career and the 25th WNBA season. The Liberty are set to begin their season May 14 with a matchup against the Indiana Fever.