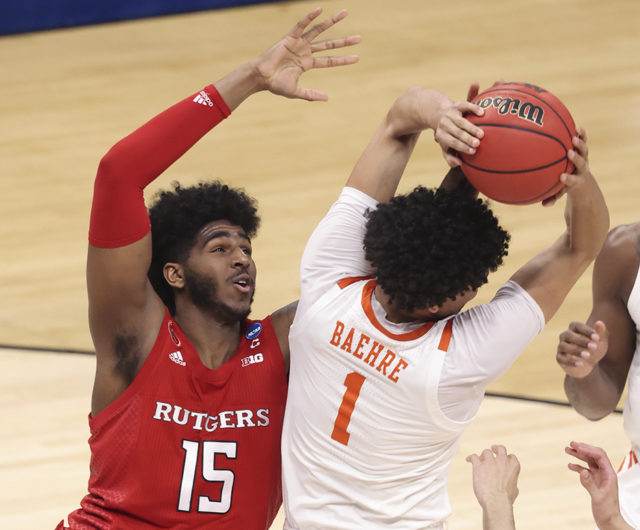 UCLA men’s basketball will add Myles Johnson from Rutgers as a graduate transfer. After playing his high school basketball career in Southern California, the center is projected to be the tallest player on coach Mick Cronin’s roster in the 2021-2022 season. (Courtesy of Joe Robbins/NCAA Photos via Getty Images)

The first transfer coach Mick Cronin wooed to Westwood wound up being the leading scorer on a Final Four squad.

Transfer No. 2 of the Cronin era is now officially in tow.

Rutgers center Myles Johnson committed to UCLA men’s basketball Friday, giving the Bruins an experienced big man to add to their 2021-2022 roster. Johnson will enroll in UCLA’s electrical and computer engineering graduate program, which he was accepted into April 9.

Johnson was also accepted into Stanford’s electrical engineering graduate program Tuesday, but he chose to continue his academic and basketball careers donning blue and gold rather than cardinal. Both schools were pushing hard to reel Johnson in, with UCLA’s coaching staff keeping in close contact with him over Zoom while Stanford set up a meeting between him and former secretary of state and current Stanford faculty member Condoleezza Rice.

After redshirting his freshman year and coming off the bench the following season, Johnson started 47 of the Scarlet Knights’ next 59 games. The 6-foot-11, 255-pound center averaged 7.9 points and 8.2 rebounds over the last two seasons.

Johnson’s 2.4 blocks per game ranked second in the Big Ten this year and helped him secure a spot on the conference’s All-Defensive Team.

By earning a commitment from Johnson, the Bruins have replaced the void in their rotation left by forward/center Jalen Hill, who stepped away from the team because of personal reasons in February and announced his retirement from basketball shortly after the season ended. Hill averaged 21.4 minutes per game in his 2.5 seasons with UCLA, while Johnson averaged 21.8 in his three years at Rutgers.

Johnson was a mainstay in the Scarlet Knights’ rotation, as he appeared in all 90 of their games since the start of the 2018-2019 campaign.

The Bruins also earned another commitment Friday, with four-star point guard Dylan Andrews picking UCLA just minutes after Johnson made his decision public. Andrews and Johnson won’t share the court until fall 2022, but the pair entered the Bruin ranks hand in hand.

The return to the West Coast mirrors the journey of sophomore guard Johnny Juzang, who was born and raised in Los Angeles, committed to Kentucky and eventually transferred to his hometown school. Johnson may not have been the top-50 recruit Juzang was – the big man ranked outside the top 350 on 247Sports’ composite rankings coming out of high school – but his accomplishments on the Power Five level make him yet another highly touted transfer addition for Cronin and his coaching staff.

Johnson is set to slide into the frontcourt rotation alongside forwards rising redshirt senior Cody Riley, rising sophomore Mac Etienne and rising redshirt junior Kenneth Nwuba. In order to add new pieces to the roster – such as additional transfers or incoming freshman recruits – players would have to declare for the NBA Draft or transfer out of the program because of the Bruins’ current scholarship distribution.

But for now, UCLA’s roster for next season is set thanks to its newest transfer addition. All Johnson has left to do is average 22.8 points per game in the NCAA tournament, then he and Juzang could have one more trait in common.