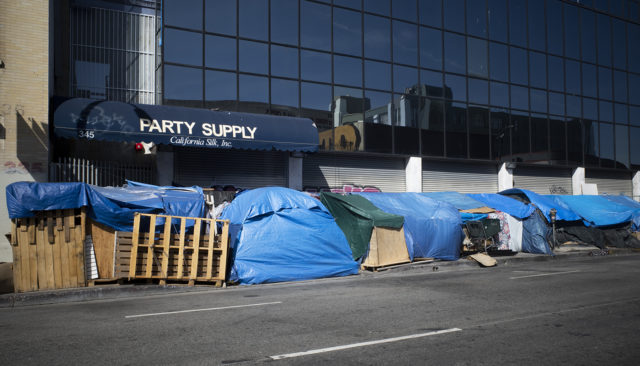 LA County filed a motion to be dismissed from a lawsuit arguing the county's culpability in inadequately addressing homelessness in Los Angeles. The City of LA is in the process of negotiating a settlement that may result in further relocation of people experiencing homelessness. (Antonio Martinez/Daily Bruin)

Homelessness advocates expressed both optimism and concern about an ongoing lawsuit alleging the county and city are responsible for not properly allocating funds to house individuals experiencing homelessness.

The LA Alliance for Human Rights, a coalition of LA residents and business owners working to address the homelessness crisis in Los Angeles, filed a lawsuit against LA County and the City of Los Angeles in March 2020. The LA Alliance alleged that the city and county failed to effectively utilize Proposition HHH-mandated funding to support the high number of people experiencing homelessness, according to the complaint filed against the county and city.

LA County denied these claims in a motion for dismissal and argued that it is committed to addressing the homelessness crisis, spending millions of dollars each year to support people experiencing homelessness. The county also claimed that it effectively utilized Measure H sales tax funds to support the Los Angeles County Homeless Initiative, which contains 47 strategies to combat homelessness in the region.

LA County filed the motion for dismissal in March which, if granted, would leave the city as the sole defendant in the lawsuit. The county said in the motion that while it shares the plaintiffs’ goal of supporting people experiencing homelessness, the lawsuit intrudes upon the county’s legislative process and is not supported by legal precedent.

As of 2019, there were approximately 59,000 individuals experiencing homelessness in LA County and 36,000 in the City of LA, according to the Los Angeles Homeless Services Authority.

Daniel Conway, a spokesperson for LA Alliance, said he acknowledged that the county is working on developments to reduce homelessness in Los Angeles but added that he believes it could be doing more to address the crisis.

“Even if you’re doing better than ever before, which I don’t necessarily dispute, it doesn’t mean that that’s enough,” Conway said. “There’s just a lack of belief and credibility in the ability to get these things done, and I think that’s so much of what we’re trying to overcome.”

Conway said while he agrees the county should have resolved the crisis on its own, its repeated failure to do so prompted the plaintiffs to seek a legal remedy.

Attorneys representing the county in the lawsuit did not respond to a request for comment.

A settlement would likely provide new housing or shelter for thousands of individuals experiencing homelessness and allow the city to use anti-camping laws to clear people off the streets, according to documents from the LA City Council obtained by the LA Times.

However, Andrew Lewis, co-chair of the North Westwood Neighborhood Council’s Community Health and Homelessness Committee, said he is troubled that the settlement would allow the city to forcibly remove people living on sidewalks, public streets, and other public places in LA.

“This approach of forced removal is also not sustainable, nor a solution, and beckons to the botched response recently at the city’s clearing of Echo Park Lake,” Lewis said in an emailed statement. “I do believe the courts should step-in to mandate that the city build an adequate amount of homeless housing.”

In March 2020, the county implemented Project Roomkey, an initiative launched by Gov. Gavin Newsom to house people experiencing homelessness in hotel and motel rooms who are at a high risk of complications from COVID-19.

Lewis said that Project Roomkey was a step in the right direction but remains far from a long-term solution.

“The City of LA needs to begin to look more closely at the root causes of homelessness, as opposed to mitigating the visible effects of the issue,” Lewis said.

Chloe Rosenstock, a second-year sociology student and member of UCLA’s Mobile Clinic Project, a student-run organization that provides legal and medical services to people experiencing homelessness, said she thinks that if the court grants the county’s motion for dismissal, it will send a message that the county never has to improve the status quo.

“I think it’ll prove that the county never has to improve or make anything better, and that we can keep getting away with treating individuals that live in our city, whether or not they’re in a home or they are on the streets, (that) you can treat them without care,” she said.