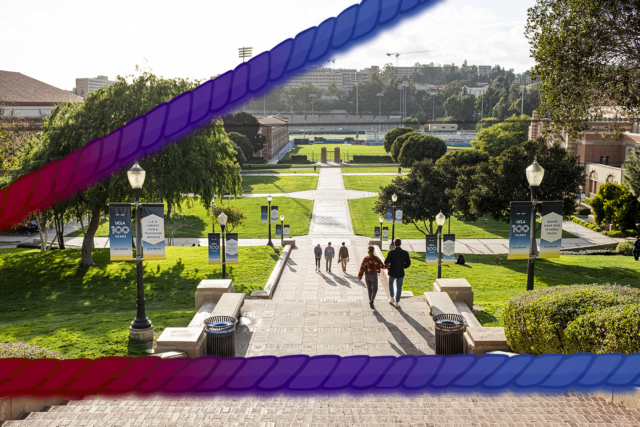 The last few years have seen an increase in partisanship – according to the Pew Research Center, the approval rating of the president has never been more polarized than under the Trump administration.

This tension came to a head Jan. 6, when some of Donald Trump’s supporters rallied at and forced their way into the U.S. Capitol, the first time a domestic group launched a large-scale insurrection at the building.

Since 2009, Democrats have moved to the left, especially on issues about race. Sixty-four percent of Democrats said that racial discrimination is the main barrier to Black people, while only 14% of Republicans believe the same, according to the same Pew Research Center report.

“Before Trump’s presidency, … you could be a Democrat or Republican, and it was respected,” Hudson said.

To the right, however, Bruin Republicans said in an emailed statement that nothing has changed since the Trump presidency and the 2020 election.

In a country that seems to become more polarized as the minutes pass, do Americans from opposite political sides have anything in common?

“The Democratic Party is evil and the Democratic voter base is completely deluded. Whether or not they intend on it, the consequences of what they believe is the total and complete destruction of our society, culture, and nation,” Bruin Republicans said in the emailed statement. “We should be glad we have nothing in common with them, because having something in common with evil makes you evil.”

Katie Chan, a recent alumna, said in contrast that she doesn’t believe Democrats’ and Republicans’ values are completely different.

Asked the same question, Hudson said she believes all Americans desire to see a better United States, no matter what side of the political arena they are on.

Indeed, if some Americans can find grounds to set aside differences, there may be potential to mend the gap.

According to a poll from Monmouth University, the desire for bipartisan cooperation is higher today than it was during the 2020 election with the support of 41% of Republicans, compared to 28% in November, and 94% of Democrats, up from 92% since the election.

Rutik Shinglot, a third-year public affairs student, said following the Trump presidency, the United States saw a higher presence of views of both political extremes in the media. Shinglot said he considers the normalization of far-right ideologies to be dangerous.

He added that because of the geographical size of the United States, people in different places deal with completely different issues, which makes fostering discussions and seeking common goals more impactful in creating meaningful change.

Similarly, Hudson said she would like to be part of conversation spaces – which she said UCLA lacks – where people of different political views could be heard and where people can come to a middle ground and move forward.

On the other hand, Bruin Republicans said it will not make any efforts in mending the gap. They said conservatives always offer reconciliation opportunities but are pushed away or ignored.

“The divides are real and ever-present,” the club said in the emailed statement.

Chan said she ultimately wants the country to work for the people and with the people. She added that she wants budgets on different levels of government to go to the people and not harm anyone around the world.

Shinglot added that he believes removing the Electoral College would ensure that democracy is more direct and votes are proportional.

“We have to have a better way of electing our officials,” Shinglot said. “We have to revamp our voting system, because we can’t hold our elected officials responsible and accountable to do long-term changes that will actually help people if we’re constantly in an election cycle.”

Hudson said the country needs to hold political leaders accountable for the division they are causing.

“Political leaders are basically agreeing to represent America, so when there is division in the people that we look to for leadership and how to lead the country, then of course there’s going to be division amongst the American people,” Hudson said.

But ultimately, only time will tell.

“I feel like this country has a lot of things to learn,” Chan said.

Chantereau was the 2021-2022 campus politics editor. He was previously a contributor for the beat. Chantereau is a fourth-year history student at UCLA.