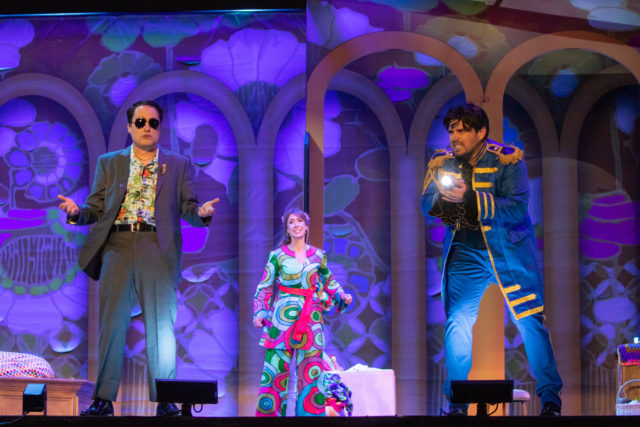 "The Barber of Seville"

The San Diego Opera is reviving the drive-in experience, bringing its arias and overtures to an outdoor stage.

The company’s latest comic opera, “The Barber of Seville,” is running from Apr. 25 to May 1 outside of the Pechanga Arena in San Diego. As the production’s sound designer, alumnus Ross Goldman said the drive-in format allows guests to hear the performance through their car radios but comes with challenges of its own.

“I basically am trying to capture the sound of the orchestra and the singers in a way that is faithful and sensitive to them,” Goldman said. “The last thing I want to do is take someone’s voice or instrument and compromise it on the way to the car.”

Having worked on the company’s previously successful drive-in opera, “La Bohème,” Goldman said the San Diego Opera decided to bring back their delayed show, “The Barber of Seville,” with a handful of the prior play’s cast and crew. Stage director Keturah Stickann said the latest production is a ’60s retelling of the 19th-century story of Count Almaviva (Carlos Santelli) who is in love with Rosina (Emily Fons) and is assisted by matchmaker Figaro (David Pershall) in charming her. But Rosina’s protective guardian and other love interest, Dr. Botola (Patrick Carfizzi), prevents the two from interacting, which only pushes Figaro and Count Almaviva to find brilliant yet comical solutions to woo Rosina and keep her from marrying the ambitious Dr. Botola.

As sound designer, Goldman said his role is to provide actors with microphones and monitor the mixes between the orchestra and the stage. Additionally, he also connects the crew through the intercom system so they can monitor sound from their cars and brings the music of the show to the spectators’ FM radios. He said it is his responsibility to make sure the audience can listen to the singers without fire trucks or airplanes cutting into the radio transmission.

Keturah Stickann, who also directed the previous drive-in show, said the outdoor venue requires her to collaborate with a video director to capture shots for the audience in the back to see from their cars on a large screen. The drive-in format also posed other challenges such as the removal of the usual indoor sound effects and the social distancing actors must take when performing, she said. Specifically, when the performers are singing to each other, Stickann said they have to be fifteen feet apart from each other and four feet apart when they are singing out to the audience.

But logistical difficulties aside, Stickann said changing the setting of the classic 19th-century story to a romantic comedy show in the ’60s can really connect with the audience – especially during a time when interacting with one’s close companions is intangible.

“We certainly recognize right now this notion of really wanting to get to somebody that we can’t get to,” Stickann said. “Truly, we’ll try anything to be able to be close to the people we love and care about … that part’s definitely going to resonate (with audiences).”

[Related: Q&A: Performer talks ‘Split: Portrait of a Drag Queen’ ahead of The Archive’s screening]

Carlos Santelli, who makes his San Diego Opera debut as Count Almaviva, said working with his co-stars Carfizzi and Pershall helps him bring his character to life on the stage and match their high energy. Santelli said he is excited to finally set foot back onto the performing stage as he has been doing multiple pre-recorded projects where audience feedback is difficult to receive.

“As a theatre performer, you thrive on exchanging energy with an audience,” Santelli said. “(In this drive-in) we’re going to get real people, real feedback, it’s just going to up the energy of the performance that much more.”

However, the long distance between the sound department and the main stage also posed issues for his role, as Goldman is more familiar with working close to the stage. He said although a drive-in show allowed him to create whatever mix he wanted, weather was still a problem as the microphones pick up and transmit windy disturbances to car radios.

Prior to Goldman’s involvement in the San Diego Opera, he said his time taking film and television courses at UCLA allowed him to expand his knowledge of sound designing for opera and helped navigate his way through the new form of presentation, comparing the drive-in show to a television broadcast. Although the pandemic ruined in-person plans, Goldman said he hopes the fresh retelling of a classic play will capture passengers’ attention from their own arena of a car.

“You don’t have to put on a tuxedo to go see it, you can bring your kids, the kids can make noise and no one else will be bothered by it,” Goldman said. “The setting of the opera is also this super colorful, almost psychedelic look … I think it takes the stuffiness out of the opera and makes it a lot of fun.”