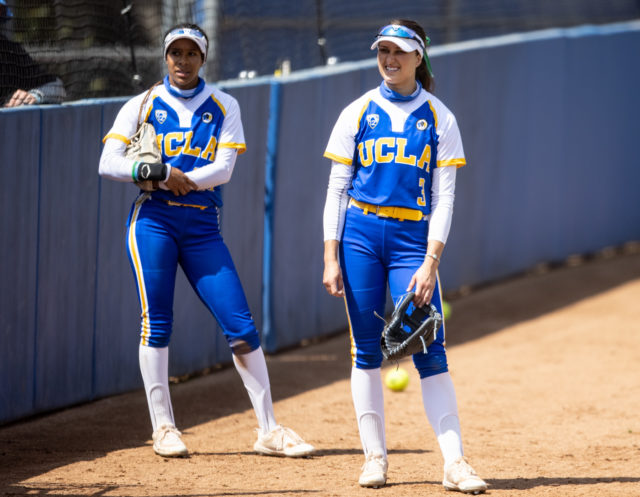 The Bruins have secured another sweep.

No. 2 UCLA softball (32-3, 13-2 Pac-12) swept Utah (19-27, 2-16) in a four-game series over the weekend. The Bruins earned shutout victories in their first two competitions – raising their total to 15 clean sheets so far this season – while picking up their seventh series sweep on the campaign.

“Overall, the offense came in clutch a couple of times and we had really, really solid defense,” said redshirt sophomore pitcher/first baseman Megan Faraimo. “We all have a role to play, and every single person in the lineup does their own thing and we do it well.”

Faraimo recorded wins in game one on Friday, game three on Saturday and game four on Sunday, while redshirt junior pitcher Holly Azevedo claimed the victory in game two. The UCLA pitching staff allowed 12 hits in the series and totaled 17 strikeouts.

“This weekend was a great opportunity for us to let our whole staff go,” said coach Kelly Inouye-Perez. “Even when we get into a little bit of trouble, they do what they can for this team and they got out of it. The ability to have starters come in as closures is incredible, and they all really can fill any role. I have been so proud.”

The Bruins hit for extra bases eight times, with six total stolen bases – including four in game one, which placed runners in scoring position and allowed for the first and fourth UCLA runs in the contest.

“(Perez) set a goal to hit at least 10 home runs, and she hit that goal this weekend, which is outstanding,” Inouye-Perez said. “Collectively, we put ourselves in a position to have some really quality at-bats. We created – I call it – havoc. The ability to put runners on and come up with those big hits, that’s when we play our best ball.”

Home runs were responsible for 6 RBIs across four games, with a 19-3 total run difference between the two teams. The Bruins out-hit the Utes 33-12, recording a weekend-high 10 hits in game two on Saturday.

“We talked about wanting to play freely this weekend,” Perez said. “We went for it and we put each other into really good positions to manufacture, and that’s what always makes us successful.”

UCLA trailed only once over the weekend, falling behind in game three after Utah posted a two-run opening frame that it rode into the sixth inning, where a sacrifice bunt by Perez placed redshirt sophomore outfielder Kelli Godin and redshirt junior infielder Kinsley Washington in scoring position. A walk by redshirt junior outfielder Aaliyah Jordan loaded the bases with Garcia at the plate.

The Olympian cleared the bases with a line-drive double to the left field wall, securing the Bruin victory in that match before a seventh-inning single by Perez granted an insurance run in UCLA’s 4-2 win.

“We switched our language around,” Faraimo said. “When things got tough we went from anything negative to positive. We knew as long as we kept passing the bat on to the next person we could get it done.”

The Bruins will return to midweek play with a doubleheader against Long Beach State on Wednesday afternoon.