Many UCLA faculty, students halt work for Abolition May as call for police reform 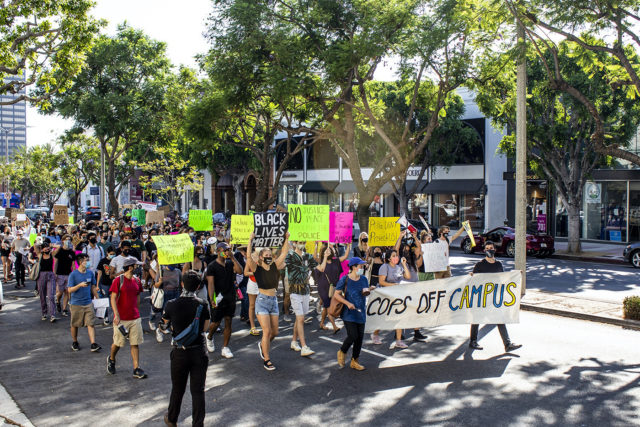 UCLA faculty and students participated in the first day of Abolition May on Monday to demand the removal of campus police. (Naveed Pour/Daily Bruin staff)

Many UCLA faculty and students refused to work Monday in protest of campus policing.

Cops Off Campus Coalition, a national organization advocating to abolish campus policing, called on faculty and students to withhold academic labor Monday as part of May Day. Additionally, Divest/Invest UCLA Faculty Collective, a coalition of faculty advocating for a police-free campus, joined the call by canceling lectures or any academic work and refusing to attend university events.

Cops Off Campus Coalition has named May 3 the first day of Abolition May, a month of actions taken on campus to demand removal of campus policing, said Hannah Appel, an associate director of anthropology and global studies. May 3 is a symbolic one-day work stoppage that allows people to focus on the power-building that abolition requires, as well as celebration and political education, said Appel, who is also a member of the Divest/Invest UCLA Faculty Collective.

“Our mission is to draw people’s attention to the possibility of abolition … a world that could be a world without police violence, a world of fully resourced communities,” Appel said. “We can start by saying, ‘We do not need policing on these campuses because we can invest those resources into creating safe communities for everyone, starting within the walls of our institution.’”

Abolition May will end with a day of abolition teaching May 25 at UCLA – an in-person and masked gathering consisting of abolition lectures and speeches, Appel said.

Appel said some departments have unanimously agreed to completely shutter operations May 3, while others have indicated their support and some have guaranteed nonretaliation to those who choose to participate.

The Life Sciences Division, the Department of Anthropology, the Institute of Society & Genetics and the International Institute are the departments that have agreed to nonretaliation toward any students and faculty that participate in the work stoppage Monday.

Dominique Mikell, a third-year graduate student in the social welfare department of the Luskin School of Public Affairs and a member of the Cops Off Campus Coalition, said she will participate in the day of refusal by pausing her teaching assistant services.

“What I aim to achieve is a larger amount of visibility for the reality that there are folks on our campus that are not OK with the status quo,” Mikell said.

She added that violence against Black and brown communities at the hands of police is unacceptable, and the university needs to stop supporting policing.

Grace Hong, a professor of Asian American Studies, which also supports the work stoppage, said the university has a history of responding to calls for campus policing reform by creating new administrative positions and announcing its efforts in protecting Black and brown people instead of taking the actions that groups actually call for.

Hong said the Divest/Invest UCLA Faculty Collective is hoping that UCLA will not react the way it has in the past to calls for the abolition of campus policing – in which it has focused on policing reform instead of divestment – but will take steps toward complete abolition.

“It’s not like we expect it to happen tomorrow,” she said. “We just want some sort of good faith commitment to divestment. But the university has never done that.”