The Quad: Transition to independence of college brings unique challenges for AAPI students 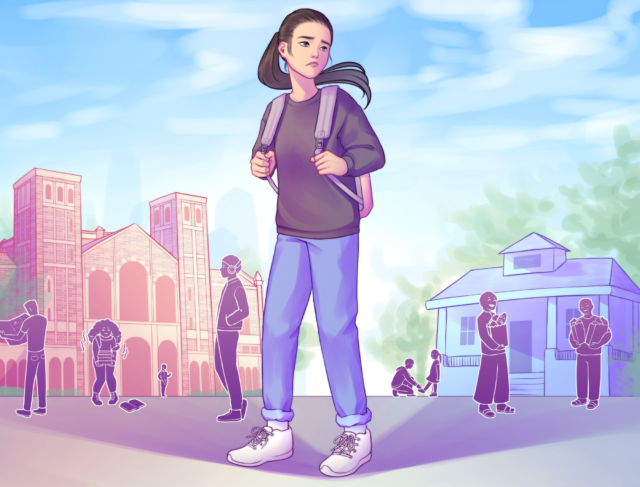 Moving away from one’s home and family to pursue life as an independent college student is a big milestone for anyone. But for members of the AAPI community, this transition to adulthood can be a conflicting one.

Sammy Fesili, a second-year psychology student, said being three-quarters Samoan and one-quarter Native Hawaiian impacted how his life is structured.

“My AAPI heritage teaches me to be grounded in the core values of God, family and education,” Fesili said.

For Fesili, an obligation to family is not just an abstract concept in a collectivist AAPI culture, but is instead a daily commitment.

“We actually live in multigenerational homes,” Fesili said. “And we take care of our elders in a way where they’re always in our care.”

According to the National Coalition for Asian Pacific American Community Development, 43% of AAPI individuals report living in a household with three or more generations as of 2010.

According to Iulia O. Basu-Zharku, many Asian societies stress a culture of collectivism, which focuses first on cooperation with the common group rather than individual action or identity. On the other hand, the United States was founded on a culture of strong individualism, in which individual initiative and priority are stressed.

This contrast appears even in the family structures that are typified in collectivist or individualist societies, such as in Fesili’s multigenerational home.

As a result, many AAPI children, especially second-generation Asian Americans, may experience a combination of immigrant parent expectations from a collectivist culture and the individualistic mindset they are exposed to in American schools and communities, Zhou said.

“That creates some sort of tension in them,” Zhou said. “On the one hand, they feel tremendous family obligation, like being closer to the family (and) being able to help out. Then, on the other hand, they also want to be totally independent.”

“It is a little bit of a struggle coming back home, like my parents are kind of pushing me to go into a certain path, careerwise, and I’m not sure what exactly I want to do,” Lu said.

Lu said it can be difficult to discuss different fields she might be interested in with her parents, especially if her parents believe it is in her best interest to pursue a conventionally stable career path.

Zhou said for many second-generation Asian Americans, as with students from all types of backgrounds, going to college means being liberated from parental control. As a result, it can be strange to be back home again because of the pandemic.

“I’m still kind of figuring out myself right now,” Lu said. “I started from high school and then I went to school, and I came back and I’m back at home with my parents.”

Lu said she wishes she treasured her family more when she was in high school, but it can still be a struggle suddenly living at home again during the pandemic.

The generational gap within many AAPI families can sometimes be tricky to traverse, but Zhou said communication is key.

“Under normal circumstances, when you’re coming home, you are coming home on vacation,” Zhou said. “So it requires a lot of changes and compromises in that challenging time.”

Even so, the transition back to living at UCLA has its own set of difficulties.

“There were times where I did feel very homesick and lonely because I’m pretty close with my parents and my sister back home,” Lu said.

Dim sum with family and church family was one of Lu’s favorite memories at home, and she said the simple act of eating meals was a big transition in and of itself.

“There’s a lot of times when you’re eating meals by yourself,” Lu said. “I know I had a hard time adjusting to that. Usually for dinner, I would be eating with my family and we all sit together and eat together.”

She said eating is a way to show love for one another. Especially in AAPI communities where collectivist values emphasize cultural dependence on everyone’s role in the group, eating with those you love can be a clear way of demonstrating that love.

With conflicting schedules, it can be hard to find a group of people to eat with consistently. However, there are still many ways you can find a family at UCLA.

Fesili said it was his mission to be part of the school’s Pacific Island community, and PISA allowed him to meet a group of people who shared the same culture and values.

For AAPI Bruins, collectivist and individualist cultures might not need to clash, but can instead complement one another as Bruins forge their paths to becoming their own people.