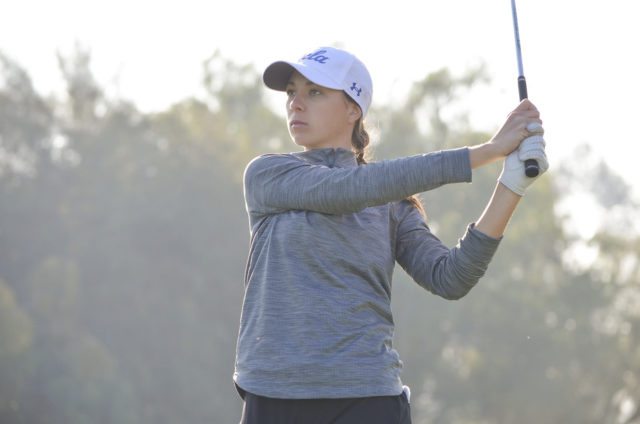 UCLA women's golf will take on a field of 18 at the University of Louisville Golf Club for the NCAA Louisville Regional, beginning Monday. Sophomore Emilie Paltrinieri is coming off a 38th-place finish at the Pac-12 championship, which saw her post three rounds in the mid-70s. (Courtesy of UCLA Athletics)

The bid for a national championship is still alive for the Bruins.

UCLA women’s golf is heading to Simpsonville, Kentucky, to compete in the NCAA Louisville Regional, where the top six teams in the field will advance to the national championship. The Bruins will be in a field of 18 teams and the lone program hailing from the West Coast.

“If the team all comes together, we can do something good at regionals,” said sophomore Emilie Paltrinieri. “We’re quite looking forward to it. I’m excited personally, this is my first time.”

This trip will be the first time UCLA goes east of the Grand Canyon State in 2021. Up until the regional, the Bruins have only played in two states, with a majority of their events being in California and three times in Arizona.

“We’re basically the only West Coast team that has been shipped out to there, we have got to deal with a three-hour time change,” said coach Carrie Forsyth. “We know that we just have to go out there and give it our best.”

While Forsyth said the different conditions present a unique challenge, she added that she believes her team is more than ready. After a two-week layoff following the Pac-12 championship, Forsyth said golfers worked on various parts of their game they hoped to improve on.

“(For) the majority of the girls, the problems that we had at Pac-12 were more about ball-striking,” Forsyth said. “We’ve worked really hard on that, and then this past week, … we’ve been just really trying to focus on playing, trying to transfer the hard work they did on the driving range to the golf course and getting more in a playing mindset.”

Forsyth said while the course conditions may be different, it is not too big of a change compared to what the team typically plays in.

“Honestly, on the upside, this golf course is bentgrass, which is pretty familiar grass for us even on the West Coast,” Forsyth said. “It’s not Bermuda – Bermuda poses its own – it’s a different grass they have in the Southeast … and that’s a very different grass than what we have typically out here.”

“In the Pac-12, I was struggling a little from the tee with my driver mainly,” Paltrinieri said. “I practiced with (associate head coach Alicia Um Holmes) this past week, just being able to hit both fades and draws off the tee in order to have whatever shot the course may require, just trying to get confidence with both shots and just having a clear strategy.”

Rounding off the lineup is sophomore Yuki Yoshihara, who did not start in the Bruins’ first three events but has made four consecutive starts. Yoshihara is coming off a 42nd-place finish at the Pac-12 championship.

While the top six teams out of 18 qualify for the national championship, Forsyth said that is not the main goal this week. She emphasized the team should play to win the event, not just the bare minimum.

“If we just go into this event with a mindset that we belong, we are not playing to make the national championship, we are playing to win a golf tournament,” Forsyth said. “I want them to have first place in their sights and not worrying about just trying to squeak in there and make it in the top six.”

UCLA will tee off Monday morning at the University of Louisville Golf Club.