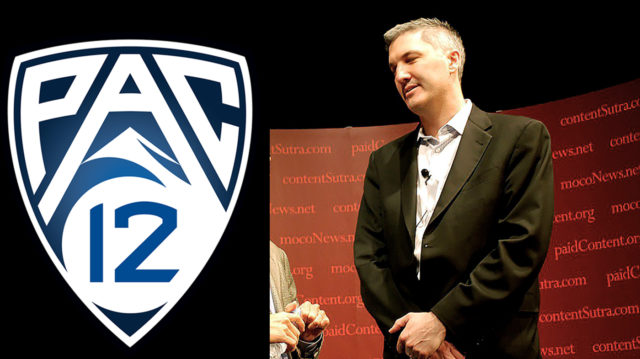 President of MGM Entertainment & Sports George Kliavkoff (right) will be the next Pac-12 commissioner, according to the Associated Press. The Pac-12 is expected to confirm the announcement Thursday. (Left to right: Courtesy of Pac-12. Courtesy of Rex Hammock/Creative Commons. Photo illustration by Daanish Bhatti)

The search for the next Pac-12 commissioner is over.

“I truly believe in the mission,” Kliavkoff said. “I believe that if we do our jobs correctly, we increase the distributions to all the member institutions. That creates opportunities in the form of scholarships and other academic support for men and women. … I want to focus on this new mission, which I think has significant importance in our society.”

Kliavkoff has never held a professional position in collegiate athletics, and the conference was reportedly looking at several candidates that fit that mold. Big-name possibilities such as Ohio State athletic director Gene Smith, Clemson athletic director Dan Radakovich and former NCAA administrator Oliver Luck were all tied to the job at one point or another over the past few months of searching, but nothing came to fruition with any of them.

The Mercury News’ Jon Wilner reported earlier Thursday there was a “99% (chance) that nobody in college sports has ever heard of” whoever the hire was going to be. Exact figures on Kliavkoff’s recognizability aren’t out there just yet, but he is far from an orthodox hire.

The last time Kliavkoff had a role in college sports was back when he rowed crew for Boston University in the 1980s, so he said bringing on an additional executive to help him make the transition is not out of the question.

“I think conference operations and working in an academic environment are certainly new challenges for me,” Kliavkoff said. “I have to think that almost every job I’ve taken, if you go back through my CV, has involved jumping into unknown structures, and I’ve found success in each of those. For me, historically, not coming in with preconceived notions about how things should operate or should be has always played to my advantage.”

In addition to his experience at MGM, Kliavkoff has also spent the last three years on the WNBA Board of Governors. Kliavkoff started his career working as a lawyer and spent some time with MLB Advanced Media in the early 2000s but has racked up a lot of experience in the TV world over the past few decades. Kliavkoff has worked at NBCUniversal, Hearst, A+E Networks and Hulu – where he was once interim CEO.

Reeling in someone who could tackle the Pac-12’s upcoming media rights issue was one of the conference’s priorities during its search, its leaders said back in January when they parted ways with Larry Scott. Launching the Pac-12 Networks was one of Scott’s biggest projects during his 11-year tenure at the top, but the conference’s member schools received revenue distributions far smaller than their SEC and Big Ten counterparts all while Scott collected the largest annual check of Power Five commissioners.

The Pac-12’s current media deal with ESPN, Fox Sports and others is set to expire in 2024, and Kliavkoff said working on a future deal that still includes the Pac-12 Networks is one of his main priorities moving forward.

“With respect to the Pac-12 Network, I believe it is part of the future of our media distribution strategy,” Kliavkoff said. “Today, the Pac-12 Network has far fewer subscribers than any other comparable network and we have to fix that. I think there’s a way to fix that through restructuring and relationships, but we have to get Pac-12 Networks distributed every place on every platform that our fans want to be able to consume that content.”

In addition to detailing his experience in media rights and negotiations, Kliavkoff came out strongly in support of College Football Playoff expansion and name, image and likeness rights for student-athletes. However, he said his three top goals on the job were to protect and support student-athletes, make decisions to optimize revenue for member institutions and do everything in his power at the conference level to make sure revenue sports, especially football, are competitive.

Kliavkoff will take over for Scott effective July 1.