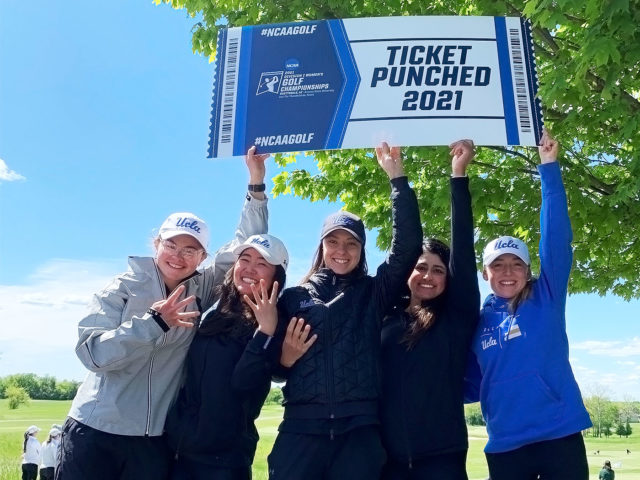 UCLA women's golf finished in a tie for second place at the Louisville Regional on Wednesday, earning the Bruins a spot in the NCAA championships later this month. (courtesy of UCLA Athletics)

Five Bruins paved the road to their national championship debuts.

UCLA women’s golf competed in the Louisville Regional this week in Simpsonville, Kentucky, continuing its postseason run with three days of tight competition at a course unfamiliar to both players and coaches. The team tied for second place with an 11-over 875, led by sophomore Emma Spitz, who secured medalist honors and the top spot in the field of 96 golfers after firing an 8-under 208.

All five Bruins were playing in their first NCAA regional this week. Sophomore Emilie Paltrinieri posted two rounds under par and finished in a tie for 12th with a 1-over 217.

Coming off a top-10 performance at the Pac-12 championship, sophomore Annabel Wilson posted an 11-over 227 to finish in a tie for 57th. Sophomore Yuki Yoshihara and junior Simar Singh both tied for 72nd place with a pair of 14-over 230s.

The Bruins faced challenges from the start of the tournament, as they were unable to play a practice round because of inclement weather.

“We had to just walk the course because the weather was crazy terrible, and even that wasn’t realistic – it was super windy and pouring at times, so you didn’t really get a good sense of the golf course,” said coach Carrie Forsyth.

But after three days of tournament play and a ticket to nationals to show for it, Forsyth said she came to appreciate the course.

“It was a great golf course – truly a championship course, a test of golf – and the kind of course you really do want to play at a regional,” Forsyth said. “You don’t want it to be an easy course – you want it to be tough, and you want to be challenged because, generally speaking, the cream will rise.”

After a strong showing on day one to find them in solo second, the Bruins stalled Tuesday and fell to seventh place, one outside the nationals cut. UCLA was among five teams within four strokes of the cut going into the third round, but a 1-over 289 secured the blue and gold a spot in Scottsdale, Arizona, on May 21.

Forsyth said an attitude adjustment for her golfers made all the difference.

“(After) round two, everybody was a little off,” Forsyth said. “There was a little defensiveness, and people got wrapped up in what they weren’t doing well. We needed to shift that focus and get back into the (mindset of) you’re in seventh place, you’re not in the bubble, so you’ve got nothing to lose, and you just have to go after it.”

Paltrinieri was tied for the lead after an opening-round 4-under 68 but shot 10 strokes worse on day two to drop to a tie for 20th heading into play Wednesday. She said mental toughness and a pep talk from Forsyth contributed to the Bruins’ success in the third round.

“The third round determines whoever is going to nationals, and every shot counts,” Paltrinieri said. “We just stayed in the moment, and we just played our game. And also our coach last night did a very good speech, which I think pumped us up a lot, and we got a lot of energy for today.”

The Bruins proceeded to post their best team score of the week on the final day of the tournament to notch five spots higher on the leaderboard, the second-biggest improvement by a team that made the cut.

UCLA will now return to the West Coast to vie for a national title on May 21 at Grayhawk Golf Club in Scottsdale. The blue and gold will join five conference foes at the NCAA championships as Arizona, Arizona State, Oregon, Stanford and USC all made bids for the final round.

“I’m just super excited,” Spitz said. “It’s our first nationals. … It’s just amazing, we’re such a great team and we get along so well. Making it as a team is so cool, so we’ll just enjoy the moment when we get there and just play our best and then see what comes out of it.”