Hundreds of demonstrators gather at Israeli consulate to protest violence 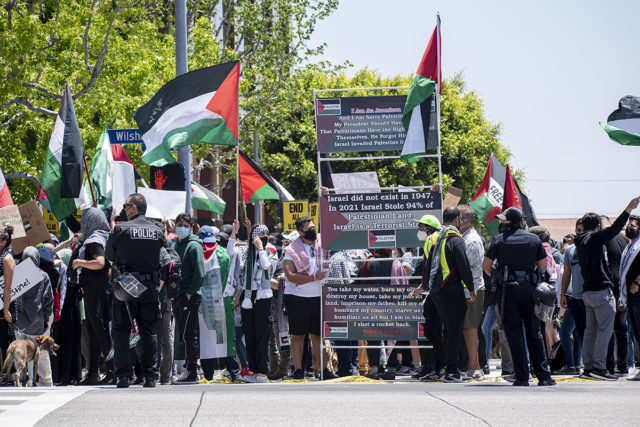 Recent weeks have seen rising violence as Israel and Hamas, a pro-Palestinian organization with a militant wing, exchanged airstrikes and rocket fire. As of May 17, 212 people in Gaza and 10 people in Israel have been killed, according to the Washington Post. More than 52,000 Palestinians have been displaced by recent Israeli airstrikes, a United Nations Office for the Coordination of Humanitarian Affairs spokesperson said Tuesday, according to Reuters.

Speakers from the Palestinian Youth Movement and the Stop LAPD Spying Coalition chanted slogans such as, “Not another nickel, not another dime, no more money for Israel’s crimes.” In 2019, the United States contributed about $3.3 billion to Israel for military aid, according to the United States Agency for International Development.

Some protesters also carried Palestinian flags and signs that read, “Is killing children self-defense?” and “Your money is funding a genocide.” The International Criminal Court began reviewing allegations of Israeli war crimes against Palestinians beginning in March, according to Reuters.

The organizers gave speeches in front of the Consulate General of Israel until around 1 p.m. Afterward, the crowd raised signs as they lined down Wilshire Boulevard for several hours before mostly dispersing by 4 p.m.

Dozens of LAPD officers were deployed to monitor Tuesday’s demonstration, including some in riot gear and on motorcycles.

LAPD spokesperson Rosario Cervantes said no arrests were made at the protest.

“The Palestinian cause is a cause for every person who cares about human life,” Abbar said. “And so everyone from every background, every ethnicity, every religion, should be here today.”

Anthony Bitar, a Palestinian American, said he was at the protest to show solidarity with his people. Bitar added that his family emigrated from Palestine to the U.S. but was unable to return home because Israeli authorities took control of their lands.

Sakeenah Ali, who is Muslim, said she was protesting the violence faced by Muslims during the final days of Ramadan, a holy month in Islam in which daily fasting is observed.

For those with family in Palestinian territories, like brothers Haytham Hussein and Ahmad Hussein, protesting is educating people about Palestinian history and the ongoing takeover of their land, they said.

“What people are just seeing right now, this has been going on for 70 years. People are just beginning to see what is going on, because the media has put it under wraps until now,” Haytham said.