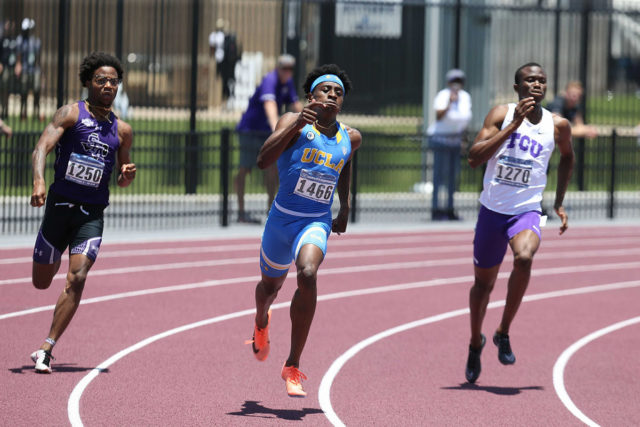 At the NCAA West Regionals, sophomore sprinter Ismail Turner set his fourth consecutive personal record in the 400-meter race as he was one of several UCLA track and field athletes to qualify for nationals. (Courtesy of Chuck Aragon)

Several Bruins punched their ticket to the NCAA championships over the weekend.

UCLA track and field traveled to College Station, Texas, for the NCAA West Regionals meet, which was canceled last season because of the pandemic. The four-day meet began May 26, with Friday’s competition postponed to Saturday because of inclement weather.

On day one, senior Harrison Schrage became the first Bruin to qualify for nationals with a 7.96-meter (26-1.5) long jump, just under his personal record of 7.97 (26-1.8). Schrage will be making his debut for an individual event at the NCAA championships.

While UCLA’s men’s team qualified in five events in 2019, just one other male athlete qualified this year.

Sophomore sprinter Ismail Turner – in the midst of his first outdoor season – was the only other male athlete to qualify, finishing eighth overall by clocking in at 45.64 in the 400-meter race Saturday after posting a 46.05 two days earlier. After running a 46.09 in the Pac-12 championship meet, he has now set four straight personal records in the event.

Heading into his first NCAA championship meet, the sprinter is already the fastest Bruin in the 400-meter race since 2004.

“(Turner’s) work ethic is what put him in this position,” coach Avery Anderson said. “At this level, pretty much everybody has the talent, but Ismail put the work in to get it done.”

Turner said he feels more comfortable outdoors after running an indoor season for the first time in 2020.

The women’s team fared slightly better than its male counterpart, qualifying in five events. On day two, senior thrower Ilaria Casarotto earned her first appearance in the NCAA championships with an 11th place finish in the javelin. After the inclement weather on day three pushed their events back to the final day, the Bruins saw qualifications in three more events in addition to Turner in the men’s 400-meter race – all on the women’s team.

Redshirt junior thrower Alyssa Wilson finished in seventh overall in the discus after recording a season-best 57.61 meters (189-0) Saturday. She also qualified in the hammer throw Thursday and will have two chances to secure her first national championship after competing in three events both in 2018 and 2019.

“I just look at it as more time to focus on the hammer and potentially winning an NCAA championship for the first time in my career,” Wilson said. “I’m glad that now I can focus on two (events) instead of three, and it will make practices more simple.”

Also on the final day, redshirt junior sprinter Shae Anderson – who entered the weekend ranked second nationally in the 400-meter hurdle – fell just short of qualifying after enduring a fall and saw the end of her season.

The Bruins also earned qualifications with the women’s 4×100 and 4×400 relay teams as well as senior sprinter Meleni Rodney in the 400-meter race. After experiencing shortened and limited training throughout the year, Avery Anderson said the team is putting those struggles behind it and living in the moment to try and bring a title back to Westwood.

“The plain fact is no one cares that we had a shortened season,” Avery Anderson said. “Let’s go out and let it all hang out. You have nothing to lose, … the past is the past, the present is here and we’re in a position to seize whatever we can.”

UCLA will wrap up its season in Oregon for the four-day NCAA championships meet beginning June 9.