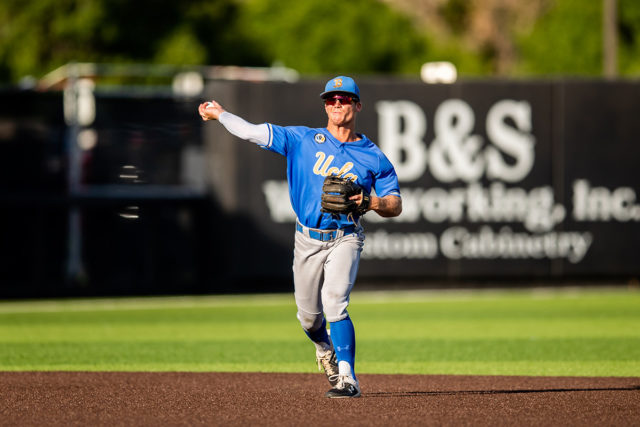 Junior shortstop Matt McLain recorded No. 2 UCLA baseball’s lone RBI in its season-ending defeat to No. 1 seed Texas Tech on Saturday. He finished the regional 7-for-16 with eight runs batted in. (Courtesy of Elise Bressler/Texas Tech Athletics)

Playing four games in three days took its toll on the Bruins, and they won’t get to play a fifth.

No. 2 seed UCLA baseball (37-20, 18-12 Pac-12) scored a combined 25 runs in back-to-back elimination games this weekend just to set up its matchup with No. 1 seed Texas Tech (39-15, 14-10 Big 12), but coming out of the loser’s bracket still meant an extra nine innings of playoff ball under its belt prior to Sunday night’s matchup. The end result was an 8-2 loss in the Lubbock Regional final for the Bruins, as the Red Raiders sent them home packing and earned a spot in the Super Regionals in their place.

Coach John Savage said the defeat had less to do with a subpar performance from his squad than it did with Texas Tech coming through when it mattered most.

“We were fine,” Savage said. “We didn’t execute in some key moments, and they had some two-out, two-strike hits, and that’s a recipe for winning and losing. We didn’t do enough to win and they did. But did we play poorly? Nobody could say we played poorly.”

The extra game the Bruins played, which finished just an hour before the next contest, gave the Raiders the upper hand in terms of starting pitchers. While Savage had to manage a bullpen game, Texas Tech sent its true No. 3 starter out on the mound, left-hander Mason Montgomery.

Montgomery, who came into the game with a 3.99 ERA in 13 appearances on the season, went five innings deep and struck out eight. After redshirt junior left fielder Kevin Kendall led off the game with a double, Montgomery allowed just one hit to the next 21 UCLA batters he faced.

The Bruin who struggled the most against the lefty was redshirt sophomore first baseman JT Schwartz, despite entering the matchup hitting a Pac-12-best .406. Schwartz struck out against Montgomery three times, jawing with the home plate umpire after his second before the southpaw flashed him three fingers after the punch out that ended the fifth.

UCLA’s first few pitchers hardly had any reason to talk a similar level of trash on the mound.

Redshirt senior right-hander Kyle Mora made his first start in over three years Sunday night. While Mora was a preseason All-American, he missed most of April and May with an injury and had already made two appearances in the Lubbock Regional prior to Sunday.

Mora got through the first unscathed, allowed one run in the second and then got tagged for three earned in the third. The righty reached 63 pitches, his most since he picked up the loss in UCLA’s season-ending defeat to Michigan in the 2019 Super Regionals.

When Mora finally passed the torch to senior right-hander Adrian Chaidez, his successor went down a similar path. Chaidez pitched a scoreless fourth, then allowed back-to-back-to-back RBI hits to put the Bruins in a 7-2 hole after five.

Chaidez’s 58 pitches were the most of his Bruin career.

Savage had multiple chances to pull both Mora and Chaidez before any real damage was done but elected to stick with them and trust them to work their way out of jams. The respective decisions backfired on the scoreboard as both relievers became one-dimensional with their pitch choices, and the hole became too deep for UCLA’s offense to dig out.

“Whenever you’re in the position that we were, you have to try to keep the game as close as you possibly can,” Savage said. “We were in a good position, we had plenty of pitching. We really did not lack any sort of pitching, it’s just they played better than we did, at the end of the day. We had plenty of depth, we’d be fine tomorrow to play.”

The only runs the Bruins scored came off a sacrifice fly and an error on a stolen base, as the bats that totaled 39 hits across the previous three games finished with five Sunday.

Two of those bats – Schwartz and McLain – may have played their last game in blue and gold Sunday night. McLain is unanimously regarded as a first-rounder ahead of the MLB Draft in mid-July, and Schwartz’s .377/.481/.561 career slash line makes him an intriguing prospect as well.

McLain reflected on his UCLA career by thanking Savage and the rest of the staff and said he doesn’t have any regrets, despite the abrupt end to what was likely his final collegiate season.

“Being out there every single day and supporting me and my teammates and allowing us to have the chance to get better on the field and off the field, in the classroom and as men,” McLain said. “Honestly, there’s no better leader I could ask for, and I know my teammates could say the same about coach Savage. I would never do anything different.”

Whether the pair – or the 16 other upperclassmen on the roster – get drafted or take their extra year of COVID-19 eligibility is up in the air, but none of them will be headed to Omaha for the College World Series this year.