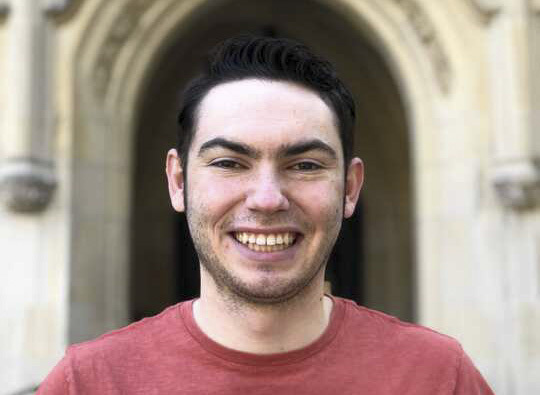 I really had no idea what I was in for here.

The only reason I joined the Daily Bruin was because I was handed a flyer on Bruin Walk my first week of classes and, not wanting to seem rude, pretended to read it as I passed all the other people handing out flyers for their various clubs.

I ended up filling out the application for the Sports section, and although I felt like I messed up a bit during my interview, I was awarded a spot in the intern class. Immediately after, I was thrown into covering men’s water polo and gymnastics, which both finished their respective seasons with national titles I was able to witness in person.

It wasn’t all perfect though. I didn’t get picked to be an assistant editor the following year, but the four who did absolutely deserved it. I picked myself back up and continued to grind it out, covering three sports in a school year while also getting to watch my first UCLA men’s basketball game from the press box.

However, I eventually became an assistant editor near the end of 2019 and, a few months after that, I became the Sports editor. Taking on this position when every sport shut down and no one knew what the future would hold was daunting, but as I hired the team of assistants around me, I knew that everything would work itself out if we continued to push on.

And it did. Just take a look at the classic UCLA sporting moments we covered this year.

Moments like witnessing a double-overtime loss to Stanford in football, men’s water polo’s title-winning game and the heartbreaking loss to Gonzaga in the Final Four are some of the memories I look back on the most fondly. As someone who grew up as a UCLA fan, experiences such as interviewing coach Mick Cronin for the first time, standing on Pauley Pavilion’s floor during the first gymnastics meet I covered and watching a game from the Rose Bowl press box were things I only dreamed about a decade ago.

Even the smaller things in the Daily Bruin still make me feel good to this day. I remember going to a baseball game with Jared Tay and excitedly watching a team I hadn’t yet seen in person. I remember annoying Sara Hubbard and Zoe Willoughby when they were on shifts or talking to Samuel In around the office about how good the men’s volleyball players were.

Meeting a whole load of people as soon as I became an editor makes me wish I had spent more time in the office, but I am still grateful for every person I met along the way.

Ryan Smith, Kelsey Angus and Joy Hong, thank you for showing me the ropes and helping me stay the course even when I was thrown onto completely new sports with legendary coaches. I had no clue how to begin reporting on water polo, gymnastics and beach volleyball, but with your guidance, I eventually found it easier than expected.

Jared Tay, Jacqueline Dzwonczyk and Coral Smith, thanks for being the best group of people to jump into an editorship with and helping me feel comfortable off the bat. It’s not easy jumping in midyear into an established group, but you made me feel at home.

Jon Christon, Taiyo Keilin, Kyle Boal and Michael Waldman, thank you for chugging along with me during this tough year and making my job considerably easier. The four of you always brought a smile to my face, even when I was upset. I’m also not afraid to admit your bad takes brought me some enjoyment.

To all the friends I met, I’ll see you all again soon, as UCLA cannot get rid of me yet. I’ll still be around, just not in the same capacity. I’ll enjoy going back to watching games without stressing over whether a sentence should say “because of” or “due to.”

Thank you to everyone who has supported me during these four years, and I can’t wait to see what the future holds for this paper.