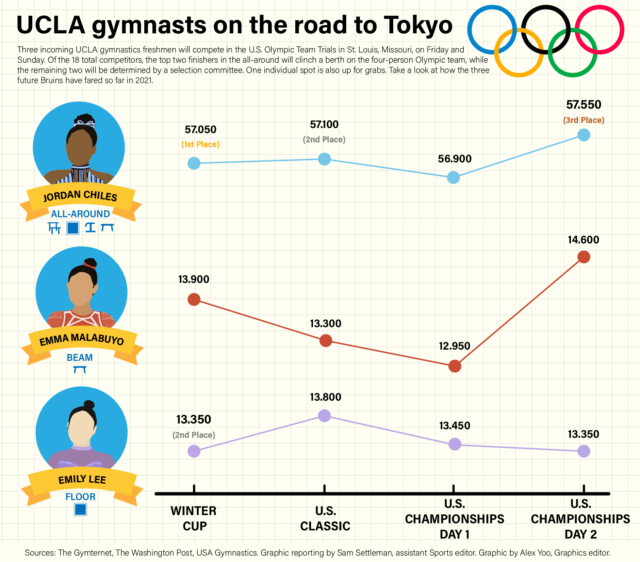 Three incoming UCLA gymnastics freshmen will take to the podium Friday and Sunday at the U.S. Olympic Team Trials in St. Louis, Missouri. Jordan Chiles, Emma Malabuyo and Emily Lee will each have an opportunity to earn a berth at the 2020 Summer Olympics in Tokyo.

Of the 18 competitors, the top two finishers in the all-around after two days of competition will automatically clinch a berth on the four-person team, while a committee will select the two remaining spots. One individual spot will also be available, with Oregon State commit Jade Carey already having earned the second individual spot allotted to the U.S.

Day one of competition will commence at 4:30 p.m. on Friday, while day two will begin at 5 p.m. on Sunday. The event will be broadcast on NBC and streamed live on NBCOlympics.com. Assistant Sports editor and UCLA gymnastics reporter Sam Settleman breaks down what to watch for from each of the future Bruins.

In all likelihood, Chiles will be an Olympian by the end of the weekend.

For much of her senior elite career, the Olympics looked like a long shot for Chiles – but that’s no longer the case.

Chiles has enjoyed a breakout year in 2021, earning podium finishes in the all-around at each of the four meets in which she has competed and vaulting herself into consideration as one of the top all-arounders in the world behind her teammate Simone Biles.

She has not only posted some of the best scores in the nation on all four events this year, but has also come to define consistency. At the Winter Cup, U.S. Classic and U.S. Championships, Chiles combined to hit all 16 of her routines.

With a 57.550 in the all-around on day two of the U.S. Championships, Chiles was the only gymnast other than Biles to score 14-plus on all four events.

On vault, Chiles consistently performs one of the most well-executed double-twisting Yurchenkos in the game. Her 8.700 execution score on bars was the best of any competitor at the U.S. Championships. On beam, Chiles has hit 10 straight routines. And on floor, where she competes to the tune of the Spider-Man theme song, she trails only Biles in tumbling pass difficulty.

Chiles has been largely unstoppable this year, and there is no reason to believe that streak will come to an end this weekend.

Barring any unforeseen circumstances, Chiles will earn one of the four team spots and uphold the streak of UCLA gymnasts representing Team USA at the Olympics.

Biles, Chiles and Sunisa Lee are widely considered locks for the first three spots on the team, but the picture becomes less clear beyond them.

Should those three finish atop the leaderboards as they did at nationals three weeks ago and thereby cement their spots on the team, there would be one team spot and one individual spot still up for grabs.

With a surprise fourth-place finish in the all-around at the U.S. Championships and one of the top beam routines in the country, Malabuyo will be in the mix for both.

On day two of the U.S. Championships, Malabuyo turned heads with a 56.000 in the all-around. Before the national team camp in March, in which she scored a 48.450 in the all-around and struggled on bars and floor, Malabuyo had not competed on all four events in more than two years.

It was a breakthrough performance for a gymnast whose career had been sidetracked by injuries for much of the last few years.

But with her injuries seemingly in the past, Malabuyo has once again become a contender for the Olympic team.

The 18-year-old shines on beam, where she scored a 14.600 at the U.S. Championships, ranking behind only Biles and Lee. With a 6.2 difficulty score, Malabuyo’s beam routine will be one of the most challenging in the competition.

If she can execute on beam on both days of competition en route to a top-three finish on the event and hit her remaining six routines, Malabuyo will be a dark horse candidate to sneak into the fourth team spot or potentially earn the second individual spot.

Like Malabuyo, Lee is one of the top beam workers in the nation.

At the national ream camp in March, Lee posted a 15.100 on the apparatus, which was not only the best beam score in the country on the event this year, but also would have beaten Biles’ gold medal-winning 15.066 at the 2019 World Championships.

Since then, however, the Los Gatos, California, native has yet to eclipse a 14.000 on beam in three tries at both the U.S. Classic and U.S. Championships. But having proven that she can put up some of the top beam scores in the world, there is no denying that Lee deserves consideration for one of the remaining Olympic spots.

Lee has been remarkably consistent on vault and floor, the latter of which she won the silver medal on at the Winter Cup in February. Bars have been her downfall, but a 13.050 on day two of the U.S. Championships – the second-highest score of her career on the event – showed that there is still room for improvement.

If she can hit on vault, floor and bars and execute to her ability on beam, Lee could be an all-around standout. Adding her top scores on each event this year yields an all-around score of 56.450, nearly two full points higher than she has reached in her career.