By Madelynn Mackenzie and Elana Luo 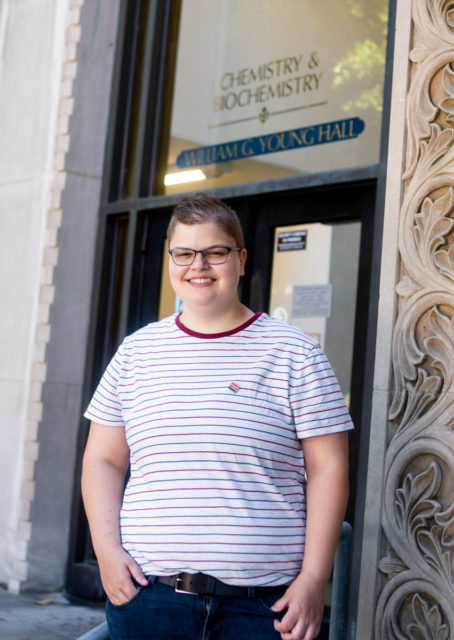 Creating a more inclusive environment for LGBTQ+ students in STEM is one of Rob Ulrich’s goals as a queer biogeochemistry doctoral student.

According to a 2018 study from Montana State University, LGBTQ+ students face difficulties accessing education in science, technology, engineering and math. The study found that students who identify as LGBTQ+ were 8% less likely to stay a STEM major by the end of their four years in college than their heterosexual peers.

However, LGBTQ+ students at UCLA are working to increase their representation in STEM and create a more welcoming environment for students.

Ulrich first fell in love with the interdisciplinary nature of biogeochemistry through their undergraduate research on the chemical composition of lobster shells at Virginia Tech. At the same time, Ulrich had fully embraced their identity as a gay man.

However, the lack of diversity in Virginia was frustrating to Ulrich, they said. The desire to connect with a larger LGBTQ+ community became a motivating factor in their decision to apply to graduate schools in large, diverse cities such as UCLA, they added.

Moving away to graduate school presented an opportunity to be surrounded by a larger LGBTQ+ community, Ulrich said.

Yasmin Rizal is a nonbinary alumnus who studied atmospheric and oceanic sciences as an undergraduate student and found community in campus organizations. Rizal, who is from Malaysia, said they came into their queer identity at UCLA.

“Just having those places to learn and grow with people who are like myself is incredibly validating, and … it’s a boost to your sense of self,” they said.

Rizal said they try to integrate their nonbinary identity as well as the knowledge and perspectives they gained into their STEM career. For example, they are not afraid to challenge conventional scientific methods and views, they said.

Though Rizal is not afraid to be different from the norm, having a community can be integral for some students to not feel alone.

“People do a lot better when they have mentors and peers of similar backgrounds,” she added.

Cumberbatch said her direct mentor at the lab she is currently working in at UCLA is gay. She said there are other queer chemists in her program, adding that it is nice to work with others who are all part of the same community.

It is not enough to only recruit people from underrepresented communities into STEM, but it is also necessary to provide resources and create a safe space for them, Cumberbatch added.

Rizal said they received a scholarship from the Center for Diverse Leadership in Science. They said having that financial assistance let them focus their energy on their work and research.

Ulrich worked to create safe, inclusive spaces on campus for people identifying with the LGBTQ+ community.

The initial climate of studying STEM at UCLA was not the picture of diversity and inclusion Ulrich had hoped when they first arrived.

There were LGBTQ+ organizations for the law and medical school but none open to undergraduate and graduate students specifically interested in STEM, Ulrich said.

Institutions also often create spaces for marginalized communities in a way that does not consider individuals’ multiple identities, Ulrich said. For example, women in STEM groups may not be inclusive to transgender women, perpetuating inequality in STEM despite superficial efforts to be more inclusive, he added.

According to Funders for LGBTQ Issues, 42% of LGBTQ+ individuals in the U.S. identify as people of color: 21% Latino/Latina, 12% African American, 2% Asian and 1% American Indian and Alaska Native.

Actively addressing issues such as anti-racism and anti-colonialism, in addition to forming more inclusive spaces, can help make people of all backgrounds and identities feel more welcome, Ulrich said.

Students are hopeful that inclusivity and representation of LGBTQ+ in STEM will continue to increase in the future.

“It’s quite narrow now, but it is a growing community,” Rizal said. “People (are becoming) more and more empowered to be out and be themselves.”