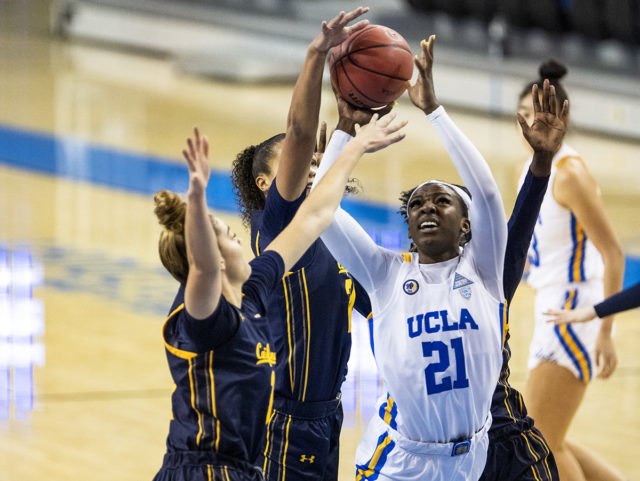 Michaela Onyenwere, who ended her time in Westwood fourth on UCLA women's basketball's all-time scoring list, received her second-straight WNBA Rookie of the Month Award in June. Onyenwere, a forward for the New York Liberty, leads her rookie class with over 10 points per game. (David Rimer/Assistant Photo editor)

As UCLA Athletics takes a break for the summer, professional sports are still in full swing, with many Bruin alumni representing. Each Monday during the summer, Daily Bruin Sports will take a look at the standout performances of former UCLA greats from the past week as we count down the days until fall.

With an NBA Finals berth on the line, one former Bruin stepped up in the absence of his All-Star teammate.

On Thursday night, Milwaukee Bucks guard Jrue Holiday filled up the stat sheet in the Bucks’ 123-112 game-five victory over the Atlanta Hawks. With two-time MVP teammate Giannis Antetokounmpo sidelined with a knee injury, the point guard poured in 25 points, 13 assists and six rebounds to bring Milwaukee within one game of the NBA Finals.

With this performance, Holiday became the first Bucks player ever to have multiple postseason games with at least 25 points and 10 assists. Holiday had his first 25 and 10 performance in game one of the Eastern Conference Finals.

Jrue Holiday is the first player in Bucks history with multiple 25-point, 10-assist games in the playoffs. pic.twitter.com/TPbJrS8RKc

The 2021 NBA All-Defensive First Team member nearly replicated his record-setting performance in a series-clinching victory in Atlanta on Saturday. The former Bruin delivered 27 points, nine assists, nine rebounds and four steals to lift Milwaukee to its first NBA Finals since 1974.

In one season with the Bruins, Holiday started in all 35 games and was selected to the Pac-10 All-Freshman Team in 2009.

Elsewhere in the NBA, two-time champion Kevon Looney opted into the final year of his contract to return to the Golden State Warriors for a seventh-straight season. The center, who won two straight championships with Golden State in 2017 and 2018, is coming off a season in which he averaged a career-high 19 minutes and 5.3 rebounds per game.

Kevon Looney is exercising his $5.1M option to return to the Golden State Warriors next season, sources tell ESPN.

In his lone season in Westwood from 2014 to 2015, Looney started all 36 games and earned second-team All-Pac-12 honors before being selected 30th overall in the 2015 NBA Draft by the Warriors.

Ashley Sanchez, a second-year forward for the Washington Spirit, brought the score even against Kansas City at 1-1 with a goal in the 78th minute. The Spirit were able to pull out a 2-1 victory with another score during extra time, moving themselves up to fourth in the National Women’s Soccer League Standings.

Sanchez tallied a school-record 42 career assists in three seasons at UCLA, with back-to-back single-season records of 15 assists in her last two seasons. She was selected First-Team All-Pac-12 in three consecutive seasons before her eventual selection as the fourth pick in the 2020 NWSL Draft by the Spirit.

Another former Bruin has been making noise early in their career.

Michael Toglia, drafted 23rd by the Colorado Rockies in 2019, was selected to participate in the MLB Futures Game as part of All-Star Weekend.

The Spokane Indians’ infielder has registered 10 home runs and 33 RBIs in 49 games while batting a .233/.344/.450 slash line as a switch-hitter. He ranks third in the High A Minor League in RBIs and leads the Indians with 30 walks on the season.

Toglia holds a decorated career as part of UCLA baseball, which led him to two All-Pac-12 selections and an All-American honorable mention in his last season as a Bruin. Toglia recorded back-to-back seasons with 10 or more home runs in 2018 and 2019 while leading the team in RBIs both years.

Michaela Onyenwere, the sixth overall pick in the 2021 WNBA Draft, earned the June Kia Rookie of the Month Award for the second consecutive month.

The forward is leading her rookie class in points and minutes per game as well as total field goals and three-point field goals. In June, she averaged 8.9 points and 2.5 rebounds throughout 10 games, highlighted by scoring 18 points in a win over the Atlanta Dream on June 26.

Onyenwere spent four seasons with the blue and gold, leading the team in scoring through her final three seasons and ending fourth in program history in total points. She received an AP All-American Third-Team selection in her junior and senior years, making her the first in program history to achieve the status twice.