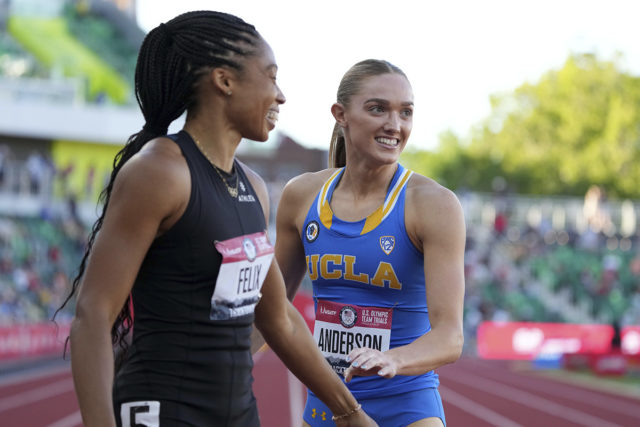 Rising redshirt senior sprinter Shae Anderson was one of two collegians to be selected to the Olympic relay pool for Team USA after setting a new personal record in the 400-meter final during Trials. Anderson is one of two UCLA track athletes that will compete in Tokyo during the Olympics this summer. (Courtesy of Kirby Lee/USA Today Images)

For the first time in almost a decade, UCLA track and field will be sending an athlete on its active roster to the Olympics.

On June 20, rising redshirt senior sprinter Shae Anderson was selected to the relay pool for Team USA. The announcement came after she finished eighth in the 400-meter final at the Olympic Trials in Eugene by recording a personal best 50.84.

Anderson will become the first returning UCLA track and field athlete to compete at the Summer Olympics since Australian thrower Julian Wruck – the all-time collegiate record-holder in the men’s discus throw – competed in 2012.

“For track and field athletes at least, the Olympics is the highest competition that you could possibly compete in,” Anderson said. “It doesn’t really get much better than that.”

The rising redshirt senior said she is especially excited about the opportunity because one of her goals when she transferred to UCLA from Oregon in 2019 was to help bring its track program back to its glory days. From 1976 to 1996, the school had 91 current or former athletes compete at the Summer Olympics – who collectively earned 49 medals – while it has seen 47 representatives since 2000.

“Ever since I got to UCLA, I always wanted to bring our program back up to where it used to be,” Anderson said. “I’m really happy that I’m able to kind of bring up UCLA’s legacy again.”

The sprinter from Norco, California, was one of just two collegiate athletes to advance to the 400-meter final at the Olympic Trials after coming in third overall in the semifinal, shown in the clip below with Anderson running in lane six.

LOOK AT THEM GO.

Anderson and recently graduated sprinter Meleni Rodney made up half of the 4×400-meter relay squad that broke the school record at the NCAA championships last month. Rodney – a native of Grenada – will also be in Tokyo to represent her country in the 400-meter dash.

Rodney will be the first UCLA-affiliated athlete in history to compete for Grenada in the Summer Olympics. The sprinter is also the first woman to have won any Olympic medal for the country after winning the bronze in the 400-meter dash in the 2014 Summer Youth Olympics.

Just days after Anderson and Rodney qualified, rising redshirt senior thrower Alyssa Wilson put on a historic performance of her own in the hammer throw during her Olympic Trials.

Though she came just short of earning a trip to Tokyo, Wilson placed second in qualifiers by setting a new personal record of 241-11, which was more than 10 feet farther than her previous career high and exceeded the Olympic standard of 237-10. She then placed sixth in the final by throwing 226-6.

The thrower also qualified for the women’s discus final a few days earlier, finishing in eighth as the top collegian in the competition.

After dealing with numerous setbacks including a three-week bout of COVID-19 to start the season and what she called a “letdown” performance at nationals, Wilson managed to bounce back and finish her season by just barely missing an Olympic berth.

“I just had this thing on my shoulder where I had to come back better than ever,” Wilson said. “I’d say it’s probably one of my best (memories) up to date.”

Rising senior sprinter Kenroy Higgins also endured a difficult season, which started with his own bout of COVID-19 and included a series of injuries after the team missed out on fall training.

Higgins II – the school record holder in the 60-meter dash – was also able to finish his season on a high note, though, by competing in the Jamaican Olympic Trials. Although he fell short of qualifying, the sprinter said he has already shifted his focus to begin training for his senior season at UCLA.

“It meant a lot for me to be able to even just compete there because we weren’t even planning on having a season this year,” Higgins said. “Next season should be a way better season because I’m training through, so I’m not really having that summer break that I usually have.”