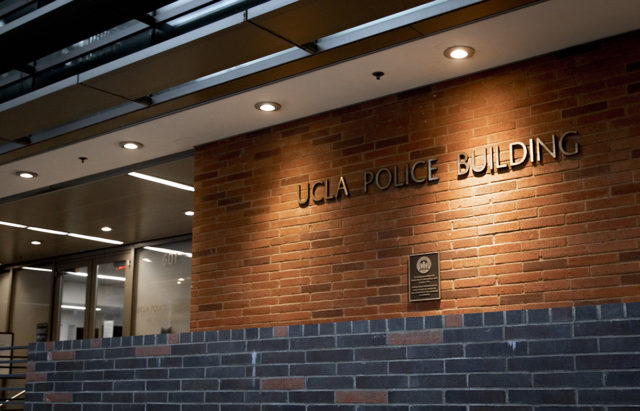 A report made by the UCLA Lewis Center for Regional Policy Studies found that a large majority of instances investigated by the UCPD have no criminal law follow-up. (Justin Jung/Daily Bruin senior staff)

A minority of UCPD policing events involves force, the threat of violence or follow up actions, UCLA researchers said in an April report.

The UCLA Lewis Center for Regional Policy Studies published the report, which analyzed UCPD response data from 2014, 2018 and 2019, and found that less than 10% of incidents involve force or the threat of violence.

Paavo Monkkonen, an associate professor of urban planning and public policy at the Luskin School of Public Affairs and an author of the report, said the report found that many of the calls UCPD responds to are low-risk situations, such as property damage and traffic calls that do not require officers to carry weapons like guns.

However, UCPD spokesperson Scott Scheffler said in an emailed statement that he disagreed with the report’s findings on the percentage of incidents involving violence because such incidents may escalate at any time.

“It is inaccurate to classify an incident as not involving the threat of violence solely based on the final listed offense,” Scheffler said.

The report also found that more than 80% of instances investigated by the UCPD have no criminal law follow-up by the UCPD.

Grace Kyungwon Hong, a gender studies and Asian American studies professor and a member of the UCLA Divest/Invest Faculty Collective, said when UCPD does not follow up on criminal activities, it raises the question as to why the police department has so much presence on campus.

Scheffler said while many incidents such as bicycle theft or breaking up a dispute often involve potential criminal activity, investigations may lack enough evidence to continue. These investigations are then marked as closed, inactive or no leads, he added.

Information regarding the classifications of criminal incidents comes from the Clery Act, a federal law that requires colleges and universities to create a log of all crime on or near campuses, Monkkonen said. Although these logs are intended to create transparency around university crime rates, some crimes’s descriptions are vague, he added.

Although the police department’s official jurisdiction includes only UCLA property, approximately one-third of UCPD responses in 2019 took place outside of campus or other relevant UCLA-owned property, according to the report.

Monkkonen said UCPD’s activities outside of its official jurisdiction might be a point of concern among those who are wondering how the UCPD budget is being spent.

“Even somebody that isn’t fully on board with defunding the police might wonder why the University of California is spending its money to police places far away from campus,” Monkkonen said.

However, Scheffler said there are multiple UCLA-affiliated properties in Westwood within the official jurisdiction classified as off-campus in the report, such as UCLA housing, commercial buildings and fraternity houses.

Scheffler added that the police department’s jurisdiction expands to areas immediately surrounding other UCLA facilities if a disturbance occurs nearby. UCPD officers are required under state law to respond to incidents they encounter in moving between UCLA facilities.

Monkkonen said the report’s intentions were to make UCPD’s activity more known to the UCLA community.

“The goal of the report was really just to present the data in a way that made it understandable to the campus community and activists,” Monkkonen said.