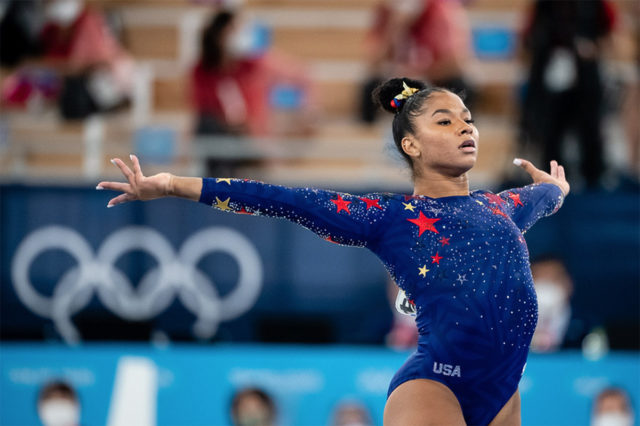 Incoming UCLA gymnastics freshman Jordan Chiles was a late substitution in the bars and beam rotations for Team USA but hit both routines en route to a silver medal in the Olympic team final. (Courtesy of John Cheng/USA Gymnastics)

Jordan Chiles didn’t even warm up on bars or beam.

The incoming UCLA gymnastics freshman was only slated to compete on vault and floor for Team USA in the Olympic team finals.

But when Simone Biles withdrew because of an undisclosed medical issue in the opening rotation of the meet, suddenly Chiles had to step in – and step up.

“We were kind of emotional when we found out that she wasn’t going to continue,” Chiles said. “We all just had to put our minds in a great position because we were just out there to show what we needed to show.”

Chiles hit on both bars and beam, but it wasn’t enough as Team USA claimed the silver medal in the women’s artistic gymnastics team final at the Tokyo Olympics on Tuesday. Finishing 3.432 points behind the Russian Olympic Committee, Team USA failed to earn its third straight Olympic gold medal in the event.

Chiles entered the competition as the only Team USA gymnast without a prior appearance at an Olympic Games or world championships, but inexperience did not prove to be a factor for the 20-year-old. Minutes after Biles’ withdrawal from the competition, Chiles unexpectedly slotted into the second spot of the bars rotation, posting a 14.166.

“I was only thinking I was doing two events but being able to put my feet in huge shoes, at the end of the day, is definitely a huge thing because no matter what we’re a team,” Chiles said.

Despite three hits from Team USA on bars, it entered the halfway point of the meet trailing the ROC by 2.500 points. The Americans opened the third rotation with back-to-back hits on beam while their competition did the opposite.

With Team USA back in front, Chiles got set to anchor the beam rotation. Chiles hit once more on beam for a 13.433, but the ROC pulled away in the final rotation to take the gold medal.

“No matter what happened, we were just proud that we were able to do what we were doing with losing somebody that’s so great,” Chiles said.

With the second-place finish, Chiles becomes the fifth Bruin gymnast in a row to win a silver or gold medal at the Olympic games. Alumnus Kyla Ross earned the first gold medal in UCLA gymnastics history with a team final win at the 2012 Games, while alumnus Madison Kocian followed suit, finishing atop the podium with Team USA in Rio de Janeiro in 2016 and adding a silver medal on uneven bars.

The team finals marked the end of the Olympic road for Chiles, who failed to qualify for the all-around final and any of the four event finals based on her results from the qualification round Sunday.

After opening the qualification meet with hits on both floor and vault to extend her streak of hit routines to 26, Chiles brushed her feet on the mat after her Pak salto on bars, resulting in a score of 12.866 on the apparatus – the lowest of her senior elite career on the event. She followed with falls on both her acro series and her dismount on beam despite entering the day with 12 straight hit beam routines in 2021.

Competing alongside Chiles and Team USA in Subdivision 3 of the qualification round was UCLA gymnastics alumnus Danusia Francis, representing Jamaica as an individual competitor. Despite tearing her ACL in the week leading up to the competition, Francis opted to compete a truncated routine on bars to complete her Olympic dream, receiving a rousing ovation from the Team USA gymnasts.

Incoming freshman Brooklyn Moors followed her fellow Bruins in Subdivision 4 of the qualification stage Sunday. Moors posted the top all-around score among her Team Canada teammates, but it was not enough to move Canada into the top eight and earn a spot in the team finals.

Nonetheless, Moors’ 53.966 in the all-around qualified her to the all-around finals as one of the top 24 finishers. The future Bruin also narrowly missed out on qualifying for the floor final after making the cut on the event at each of the last three world championships.

Moors is set to compete in the all-around final at 3:50 a.m. on Thursday.