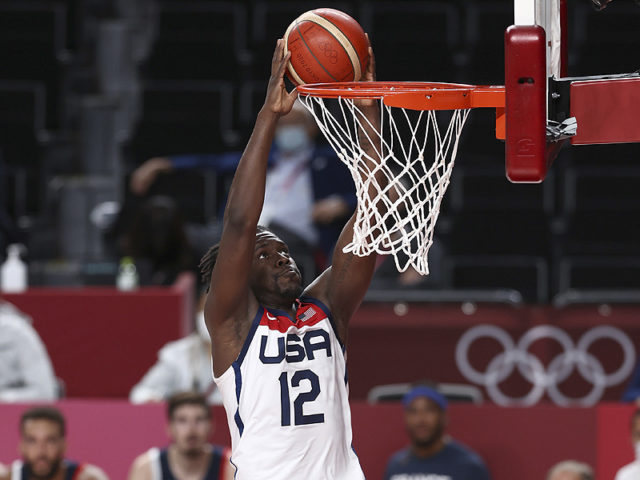 Former UCLA basketball guard Jrue Holiday started the last five games for Team USA at the 2020 Tokyo Olympics, helping the team to a 5-0 record while averaging 10.6 points per game. (Courtesy of Stephen Gosling/NBAE via Getty Images)

Of the 40 future, current or former UCLA athletes who competed at the 2020 Tokyo Olympics, 15 athletes won 16 total medals – seven golds, seven silvers and two bronze medals. With this in mind, Daily Bruin Sports editors picked which Bruin athletes had the best performance at the summer Games.

With two losses in exhibition contests heading into the 2020 Olympics, just the third and fourth exhibition losses for Team USA since 1992, many were starting to doubt if the team would be able to uphold the American legacy and win its fourth straight gold medal.

Then, Jrue Holiday – fresh off his first NBA title – arrived in Tokyo.

Just days after Holiday’s Milwaukee Bucks finished off the Phoenix Suns in Game 6 of the NBA Finals, the guard was rushed into action – playing a team-high in minutes in Team USA’s opener against France after an overnight flight across the Pacific the night before.

While the team lost that game too, one thing was clear: Holiday was the missing piece the team needed to win, and coach Gregg Popovich leaned on him heavily. From that point on, Holiday started each game, finishing with the second-most minutes played on the team behind only Kevin Durant.

With Holiday in the starting lineup, the Americans went 5-0 with a 25.4-point margin of victory. Individually, Holiday averaged 10.6 points and nearly four rebounds and assists per game over that stretch.

In the game that won Team USA gold, Holiday once again flashed his defensive acumen, holding France’s Evan Fournier to just 16 points on 5-of-15 shooting after he scored 28 points in the opener. Holiday also scored 11 points of his own to help the Americans stand atop the podium.

Holding up his first gold medal just weeks after hoisting the Larry O’Brien trophy, it’s hard to imagine a much better Olympic experience than the one Holiday had – UCLA athlete or not.


With two kicks, Jessie Fleming may have prompted the fall of a global powerhouse while jump-starting the rise of another.

The Canadian midfielder, who played for UCLA women’s soccer from 2016-2019, scored not one but two penalty kicks that proved pivotal to helping the Canadian women’s soccer team win its first Olympic gold medal in Tokyo.

The first penalty kick came in the 74th minute of the semifinal game against the United States and resulted in the only score of the matchup. The eventual 1-0 victory was the first for Canada over the United States in more than two decades and just its fourth in 62 meetings.

Fleming’s second make from the penalty spot came in the 67th minute of the gold medal game against Sweden, this time with Canada trailing 1-0. The former Bruin’s goal became critical for the second consecutive game, with her team prevailing 3-2 in a penalty shootout after a 1-1 tie after extra time.

With the tournament win, Fleming helped the Canadian women’s soccer team stand atop the podium for the first time since the sport was added to the Games in 1996. And with the Americans losing their second match of the event after previously winning 44 straight, Fleming may have helped spark a shift of power in international women’s soccer, where she has already made a name for herself.

Since making her senior international debut in 2013 at 15 years old to become the second-youngest player to ever play for Canada, the Ontario native has earned 89 caps and two World Cup team selections.

Still just 23 years old, the midfielder has already made history for both her country and alma mater and has the chance to steer Canadian women’s soccer into a new era.


If an athlete goes to the Olympics, wins a gold medal and is named tournament MVP, they can make an argument that they are the greatest player on the planet in their sport.

The attacker played an integral role in completing the Olympic three-peat for Team USA in Tokyo. After a blowout win in the quarterfinals, Musselman scored five goals in the semifinal before tacking on three more to close out Spain in the gold medal game with the greatest margin of victory ever recorded in an Olympic final.

Musselman’s 18 total goals coupled with her suffocating defense and countless other intangibles earned her the title as the best player at the Olympics and simultaneously certified her Olympic performance above that of any other Bruin.

But it was never going to be a fair fight, because this wasn’t Musselman’s first rodeo.

A year after committing to UCLA, an 18-year-old Musselman made her Olympic debut at the 2016 Rio Games. The moment was never too bright for Musselman, who scored 12 goals during the tournament en route to her first gold and was named to the Olympic All-Tournament Team.

In her freshman season with the Bruins, the attacker erupted for a UCLA freshman record 69 goals to lead her team. The accolades poured in, but the Bruins came up shy in the national title game. Musselman led UCLA in goals once more in 2018 and again in 2019, but the national championship trophy never found its way to Westwood.

With the two-time Olympic gold medalist preparing to return to the Bruins for one last dance, UCLA might just be celebrating an NCAA championship and rewriting its record books in May.

Regardless of what happens next, Musselman has established herself as one of the greatest to ever do it – both with the blue and gold and the red, white and blue. No one else on this list can say the same.


Let’s engage in a wee bit of tomfoolery.

Objectively speaking, winning silver pales in comparison to capturing the gold. But in an argument shrouded in subjectivity, why can’t the contrary hold true? After all, it’s a fitting perspective for the player known for being quite the jester on the Bruins’ 2013 national championship team.

In all seriousness, former UCLA baseball outfielder Eric Filia and the United States are walking away from the Tokyo Olympics with a silver medal in tow, and we should be impressed.

The Seattle Mariners prospect slashed .263/.391/.316 at the games, tied for second in bases stolen, and with his country, stole our hearts in the process.

His performance coincided with baseball’s return to the quadrennial sporting tradition and came amid his tumultuous half-decade spent in the minor leagues. The starting right fielder had endured through multiple suspensions, a failed physical and the league-wide COVID-19 hiatus before he found his place with the red, white and blue.

These games carried the future of Filia’s career, the weight of an entire country and the fate of its national sport.

When all was said and done, the silver medal finish marked Team USA’s best performance in the sport in more than two decades.

With baseball taking a temporary absence during the 2024 Paris Games but potentially returning as a fixture in Los Angeles in 2028, Filia and his team’s accomplishments should be enough to inspire a nation the next time we hear bats swing.


Jrue Holiday, Jessie Fleming, Maddie Musselman and Eric Filia. All four Bruin athletes have one thing in common: winning a medal at the Tokyo Olympics.

But while earning a medal is an accomplishment in itself, of the 15 total Bruin medalists at the Olympics this summer, only one stood on the podium twice.

Former UCLA track and field athlete Rai Benjamin nabbed both a silver and a gold medal in his two events in Tokyo, handing him the most medals earned of any past, present or future Bruin in the Games this year.

The former one-year wonder at UCLA from 2016-2017 secured a second-place finish in the men’s 400-meter hurdles while later anchoring Team USA in its gold-medal performance in the 4×400-meter relay.

My fellow editors may have argued that it isn’t just about the medals, but about the history of a medal, the meaning behind a medal or someone’s individual statistics on their medal-winning team. But if you want the clear-cut answer to the question about who performed the best in Tokyo, a double-medal finish – and a silver and gold-medal finish at that – should be that answer.

However, if a two-medal showing isn’t already enough to qualify him as the best Bruin performer in the Olympics, Benjamin earned his silver medal while also besting the prior world record in the event and recording the fastest time in the 400-meter hurdles in U.S. history.

Norway’s Karsten Warholm held the world record in the event leading into the race, and while Benjamin beat Warholm’s record by over half a second, he still fell behind the reigning record-holder by 0.23 seconds.

Not only will Benjamin return home from the Olympics equipped with two new pieces of hardware, he will also go down in American history in a race for the ages.