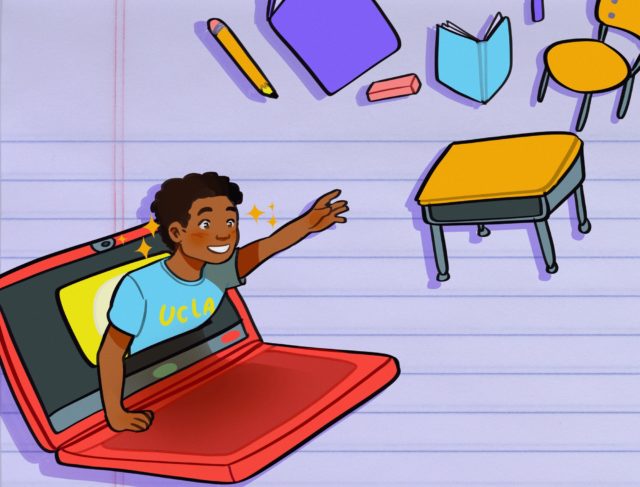 Alas, we can say goodbye to the tiny gray Zoom boxes and hello to lecture halls and discussion tables.

As fall quarter approaches, many Bruins are looking forward to in-person learning environments. With the challenges online learning presented, the move back to campus classrooms is a rather welcome one.

Fifth-year English transfer student Bryce Brewer said the hardest part of being online was not being able to meet anybody, as every class felt like a one-on-one conversation with his professor.

“There was always this feeling of eeriness. … I felt like I was in limbo,” Brewer said. “Since they’re all in the same exact environment and just in my room, … (classes) just felt like everything was melted together.”

Third-year physiological science student Anushka Chauhan said that being online made it difficult to forge relationships.

“It was hard to create new friendships, bond with other students and find study groups because everything was online, so it made it a little bit harder to study,” Chauhan said.

International students also had the added challenge of vast time zone differences. Chauhan said that even though she lives in the Bay Area, she took spring quarter classes in India, often waking up at 4 a.m.

“There were times where I couldn’t access my assignments because of technological errors,” Chauhan said. “Luckily, most of my professors and TAs were understanding of my situation, but from that quarter being abroad, I realized how difficult online learning has been for international students.”

With the transition back to in-person learning, though, Bruins from near and far will be making a long-awaited appearance on campus and have the opportunity for a more normal college experience.

Second-year anthropology student Ahmad Rajwany said that he is looking forward to the motivation he will get from seeing other people working hard.

“I find as an extrovert, thriving off the actual physical energy and presence of people – I think that’s a big deal,” Rajwany said. “I thrive off of that, and I think a lot of other people as well might thrive off of that.”

Brewer said he is excited to be able to talk to professors and TAs after class and be in the physical presence of a classroom.

“To be sitting in desks and chairs right next to other students, there’s just a different feeling. You just feel like you’re actually in a community,” Brewer said.

Chauhan added that she is looking forward to finding a community in her classes and making new friends.

“With everything through Zoom, it’s really convenient to be able to just turn off your camera and mute yourself, but at the same time, it makes it really hard to meet other people,” Chauhan said.

While the transition to in-person learning holds many exciting promises, Bruins also understand that it will present challenges of its own.

Chauhan said that taking tests in-person will require adjustments. While many exams were once open note, returning to campus means that rewatching lectures and referring to notes during tests will be a lot more difficult.

“I feel like that’ll be challenging for students, but I feel like professors will be understanding,” Chauhan said. “So I think they’ll gradually help students adapt to that change.”

Rajwany also said that time management will be important, especially with the commute to class. As a student with a North Campus major and South Campus pre-med classes, Rajwany has to walk between both corners of campus every day.

“That’s definitely going to be hard, rather than having a lecture in 10 minutes and just turning my computer on to the next Zoom,” Rajwany said.

Brewer said that dealing with a heightened sense of competition during in-person classes will be challenging but compared the experience to driving on a highway.

“You’re going your own speed, and you’re just focusing on what’s in front of you. Obviously, you’ll see a lot of people going past you, but you focus on yourself and not worry about other cars,” Brewer said. “You just (have to) look in front of you, follow your own map, your own ways, your own exits, your entrances.”

Transitioning to campus may be strange for some Bruins who had little to no time on campus before lockdown began.

“Once the pandemic happened, I spent the rest of my freshman year and sophomore year online, and I’m going back this fall as a junior, so it definitely feels strange because I still feel like a freshman,” Chauhan said.

It is only a matter of time before we enter a new chapter and see Bruin Walk bustling with activity from both new and returning students.

“I’m hoping everyone is really happy to make connections, work together, study together and have really meaningful conversations as Bruins,” Brewer said.