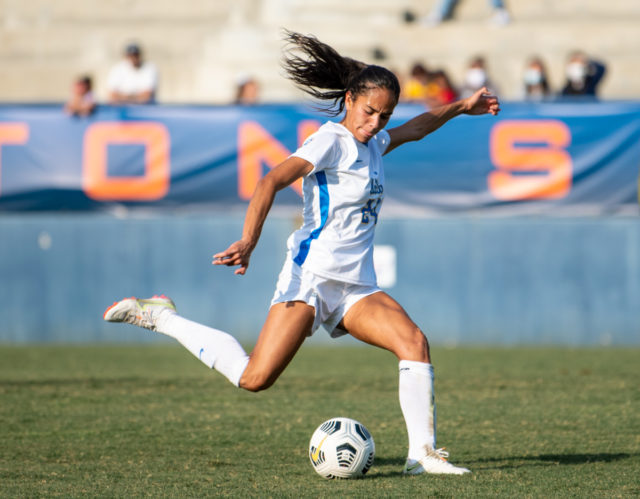 Senior midfielder Maricarmen Reyes scored her second goal of the season in as many games for No. 5 UCLA women’s soccer, as the Bruins beat Cal State Fullerton 3-0 on Sunday. (Lauren Man/Daily Bruin senior staff)

A record crowd showed up to watch the Bruins.

No. 5 UCLA women’s soccer (2-0) defeated Cal State Fullerton (0-2) 3-0 on Sunday evening at Titan Stadium in front of 7,832 fans. The record-setting attendance was good enough for the fifth-largest showing in a regular-season game in NCAA women’s soccer history, with the Bruins accounting for four of the top five crowds.

“It’s a great stadium – Fullerton is an awesome team, they’re coached really well,” said coach Amanda Cromwell. “We knew it was going to be a fun game for the fans. Especially after not having fans at all – having that many, the atmosphere was really good.”

After scoring three first-half goals against UC Irvine on Thursday, UCLA wasted no time creating offensive chances against Fullerton. In the 10th minute, junior forward Mia Fishel set up senior midfielder Maricarmen Reyes atop the 6-yard box, but the shot was blocked by a Fullerton defender in front of the goalkeeper and cleared away.

Less than 60 seconds later, Reyes – who notched the first goal against the Anteaters in the season opener – dribbled herself into the box before dispatching a left-footed strike to the back post and into the back of the net to put UCLA on the scoreboard.

The Bruins continued threatening the Titans’ goal, totaling eight shots in the first half – with seven of the eight coming off the feet of Reyes, Fishel and sophomore forward Reilyn Turner – but none of the attempts managed to double the blue and gold’s lead.

“It’s super exciting because everyone is pretty threatening,” Reyes said. “We’re ready for every game, anything that comes our way. We’re pretty lethal in the attack, and defensively we’re trying to get better too.”

On the other side, Fullerton’s only shot of the opening 45 minutes was an attempt from forward Kaytlin Brinkman that went just wide of the post.

In the second period, other than a Fishel slow-rolling shot in the opening minutes, neither team challenged each other’s defenses until the 63rd minute, in which Fullerton deflected successive shots from sophomore midfielder Michaela Rosenbaum and freshman defender Quincy McMahon heading toward goal.

The Bruins continued testing Titan goalkeeper Noa Schumacher, and in the 78th minute, a cross from redshirt junior midfielder Madelyn Desiano was volleyed by McMahon into the top right corner for the first goal of the freshman’s collegiate career.

Cromwell said McMahon – who was ultimately named Bruin of the Match – provided an inspired performance off the bench.

“Quincy coming in off the bench and getting the goal and really having an impact in a lot of different positions was fun,” Cromwell said. “Just to see a rookie have that kind of impact on the game.”

Moments later, Fishel added to UCLA’s tally. After receiving a pass from Rosenbaum within the 18-yard box, the forward turned and saw her right-footed shot enter the goal for her second score in as many games.

Fishel said having previous experience playing with her teammates has allowed for early success in the season.

“Playing with Maricarmen and Reilyn for two years, we know each other really well (now),” said Fishel. “They know where I want the ball, and after they get it to me it’s on execution. This summer, I was training really hard and practicing different shots and I think it’s showing in the games.”

Unlike the match against UC Irvine, UCLA’s defense along with senior goalkeeper Lauren Brzykcy preserved the clean sheet while holding the Titans to four total shots throughout the contest.

Cromwell commended the play of her defenders, including freshman Lilly Reale and juniors Kylie Kerr and Brianne Riley.

“The defense was great,” Cromwell said. “I especially thought Lilly and Kylie defended well, (and) Brianne in some moments where they had counterattacks or we had numbers down, situations where defenders had to come up big and they did. Lauren had to make a few saves at the end there to keep the clean sheet, so I was happy for Lauren to get the shutout.”

UCLA will have a week off before returning to the pitch to take on Long Beach State on Sunday at Wallis Annenberg Stadium.