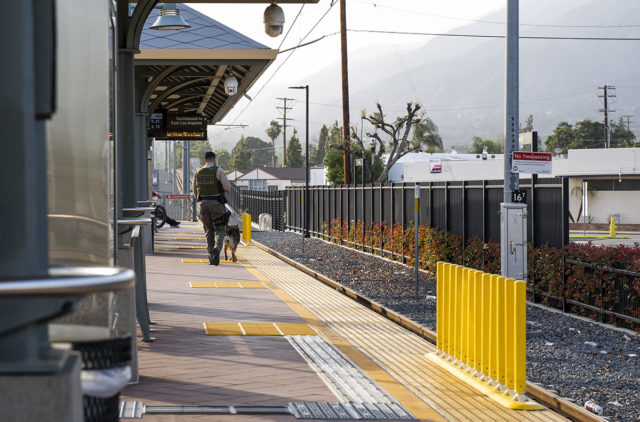 The Los Angeles Metro is considering alternatives to its current transit expansion plans that would add a metro stop on the UCLA campus. (Esther Ma/Daily Bruin)

The Los Angeles Metro is moving forward with its West LA transit projects that intend to connect West LA with downtown LA and the San Fernando Valley.

The Metro Purple (D Line) Extension Transit Project, which plans to extend the Purple Line to a new station in Westwood, began piling operations Aug. 23, which are expected to be completed by Sept. 17. Piling is the construction process that prepares a site for excavation, according to an emailed statement from LA Metro.

The Sepulveda Transit Corridor Project was introduced in 2018 with a first phase goal of connecting the San Fernando Valley with the Westside by 2035, and subsequently, LAX by 2059.

Currently, the Metro is planning to open new stations near the West LA Veterans Affairs Medical Center and the intersection of Wilshire and Westwood boulevards, according to the Metro statement.

In response to the Metro’s plan, the Westside Regional Alliance of Councils, which includes the North Westwood Neighborhood Council and other nearby neighborhood councils, have asked Metro to consider alternatives that would include a station directly on the UCLA campus. Four out of five such alternatives currently being studied by the Metro would include a UCLA station, according to the Metro statement.

The NWWNC represents UCLA, Westwood Village and the North Village to the LA City Council.

Furkan Yalcin, the NWWNC president and at-large stakeholder, said he thinks having a station directly at UCLA would be the most important part of the Sepulveda Transit Corridor Project because of the thousands of people who commute to UCLA and Westwood.

Housing near UCLA has become increasingly unaffordable for students, making expanding transit options to nearby areas even more important, Yalcin said. Other transportation options, such as buses, bikes and ride-sharing services are not as safe, efficient or reliable as a Metro station, Yalcin added.

Improving transit options in the Westside has the potential to significantly reduce some individuals’ commute times because of the advantages of traveling underground between the Westside and downtown LA, said Jacob Wasserman, a research project manager at the UCLA Luskin School of Public Affairs.

However, the “first mile, last mile” portions of commutes can substantially affect the usefulness of a transit option like the Purple Line extension, Wasserman said, referring to the distance between the closest station and an individual’s starting point or destination.

By adding a stop at the UCLA campus, Metro usage may increase as students are among those most likely to need transit options because they don’t own a car, said Wasserman, who was appointed as a member of the public to the NWWNC Transportation and Safety Committee.

The Metro is expecting to gather community input later this year during a public scoping and comment period for the project’s upcoming draft environmental study, according to the Metro statement.

Jung is a senior staff reporter and a photographer for the Bruin. He was a 2021-2022 assistant News editor for the campus politics and city and crime beats. Jung was also the 2020-2021 assistant Enterprise editor. Jung is a third-year global studies and geography student.