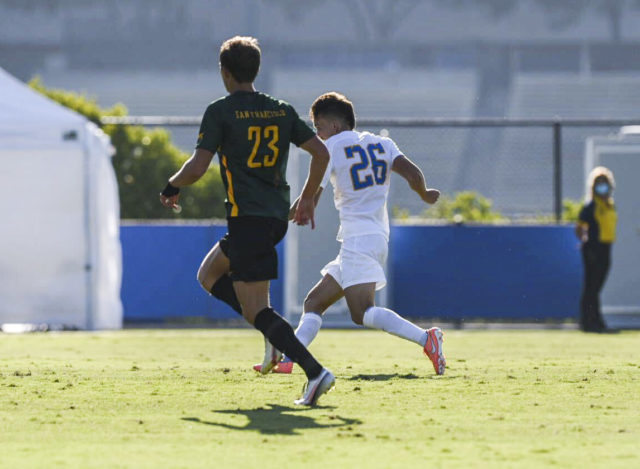 For the second straight game, the Bruins secured a shutout.

UCLA men’s soccer (3-1) beat Cal State Northridge (0-4) by a score of 4-0 on Monday night at Wallis Annenberg Stadium. The Bruins’ four goals – all of which came in the first half – were a season high.

Sophomore defender Tommy Silva scored the first goal of the match in the 25th minute after a corner kick from redshirt freshman midfielder Tucker Lepley. 10 minutes later, Silva returned the ball to the back of the net for his second goal of the game and his first-ever collegiate brace.

Silva has now scored three goals this season but said he is more focused on the team’s success than his own personal achievements.

“It feels good,” Silva said. “At the end of the day, though, I’m just happiest that our team is winning.”

Silva was not the only Bruin that scored Monday, as in the 39th minute, redshirt freshman forward Jose Contell scored his first collegiate goal just four minutes after entering the game.

The fourth goal of the game came courtesy of a penalty kick by graduate midfielder Yoni Sorokin after freshman forward Brandon Zelaya drew a penalty inside the box.

UCLA’s four goals doubled the total number of goals that the Bruins have scored all season, and its 14 shots on goal were a season high.

Coach Ryan Jorden said the team has been studying game film and was able to finally execute what they had been practicing.

“We looked at the last game and we identified the areas where we have to be a bit sharper,” Jorden said. “The guys came out and really followed through on the things that we identified, so I was really pleased with just the sharpness and the attention to detail that we had going. ”

The win marks UCLA’s third in a row after their season-opening loss against Lipscomb, and the three-game winning streak is the longest that the Bruins have had since the 2018 season.

Contell said he believes the momentum UCLA has been generating will be instrumental in helping them win the next few games.

“Right now, it’s a very important moment,” Contell said. “We are in a good vibe, in a good way and now very important games are coming so we have to keep the same way and continue winning.”

UCLA’s three wins so far this season also match the number of wins that the team had all of last season. While the 2021 Bruins are 3-1 through their first four games of the season, the 2020 Bruins ended the year with a 3-7-2 record.

However, while Jorden said he believes the quality of players on the team has improved, he also added that the momentum UCLA built toward the end of the last season has helped as well.

“We’re deeper and as a result, our overall quality is better,” Jorden said. “But the experiences that the team last year was able to go through helped us grow. What we did in the spring set the table for being able to get off to a good start this year.”